Decades Ago, the U.S. Military Set Off a Nuke Underwater, And It Went Very Badly - Atlas Obscura
Want to see fewer ads? Become a Member. 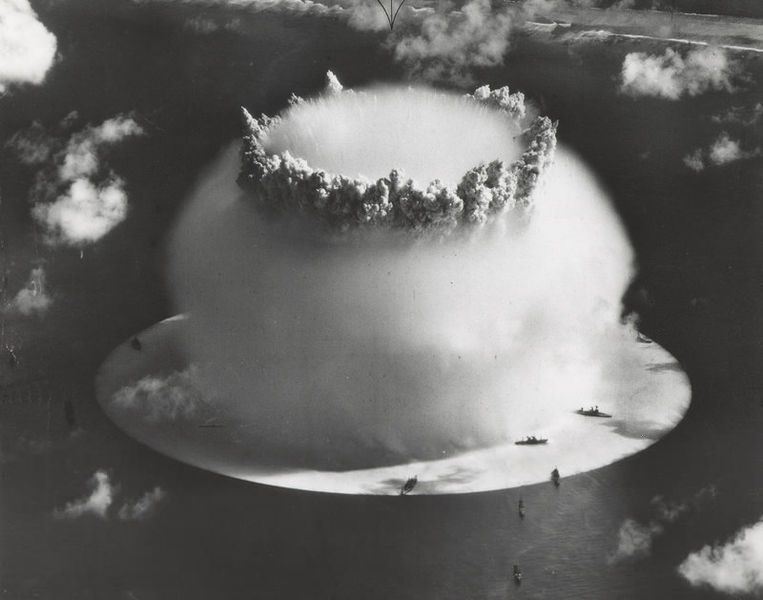 The most destructive part of the blast was the cloud of radioactive water. U.S. Army Photographic Signal Corps

On July 26, 1946, the U.S. military tried a new type of nuclear test. A joint Army/Navy task force had suspended a nuclear device, oddly named Helen of Bikini, 90 feet below the surface of the water, in the middle of Bikini Atoll, one of the isolated rings of coral and land that make up the Marshall Islands. Arrayed around the 21-kiloton bomb were dozens of target ships.

The Navy had a point to prove. In this new era of nuclear warfare, in which the Air Force could rain down explosives on entire nations, what use was a naval force? The military leaders who proposed the test wanted to show that their ships could ride out a nuclear attack and that the fleet was not obsolete.

But the underwater test was controversial, perhaps even more so than land-based test blasts. Even nuclear scientists questioned its point. Would it offer useful, scientific information or was this all just for show?

When Helen of Bikini exploded, it created a giant, underwater bubble of hot gas. In seconds, the bubble hit the seafloor, where it blasted a crater 30 feet deep and at least 1,800 feet wide. At the same time, the surface of lagoon erupted into a giant column of water, two million tons of it, which shot more than 5,000 feet into the air, over an area a half-mile wide. In the seconds after the blast hit the surface, a cloud of radioactive condensation unfurled across the lagoon, hiding the column of water shooting upwards. At the top, a mushroom cloud of gas bloomed against the sky.

That first underwater test, the Baker event, instilled new awe for the power of the bomb. The Navy had believed that many of the target ships could survive the blast, be decontaminated, and sail out of the lagoon. But within two weeks, Navy leaders had to admit that the ships were so soaked in radiation that they couldn’t be saved, and the Marshall Islands became a graveyard for irradiated vessels. After that, even in the years that the United States and the Soviet Union regularly tested nuclear bombs, only a few were ever underwater. It took almost a decade after Baker for the Navy to try setting off a bomb underwater again.

A Graveyard of Ships

LSM-60 was the first ship to go. The bomb had been suspended directly beneath it, and when the blast burst upwards, the ship was pulverized—it was as if it had disappeared. Only a few fragments were ever found, by Navy men cleaning the decks of other ships.

Arkansas, a battleship, went next, the first ship ever to be sunk by an atomic bomb. YO-160, an oil barge, went down quickly, along with the auxiliary craft ARDC-13. Saratoga, an aircraft carrier, took seven and a half hours to sink. After the blast, her stern started to drop into the water, and the ship tilted to starboard. Nagato, a battleship captured from Japan, sunk four days later, in the night, when no one was watching. Three of the six submarines hidden beneath the water sank, as well. Many of the other target ships remained seaworthy, but that does not mean they survived.

The true impact did not become clear for more than a week, though. Even in the first hours after the blast, clean-up crews started heading toward the boats, only to turn back when they measured how dangerously high the radiation levels had risen. The vice admiral heading the task force sent out a crew on tugboats to tow Saratoga to a nearby island before it sank, but after the radiation turned them back, the crew watched from afar as the ship slowly went down.

The problem was the water. In previous atomic tests, radioactive particles spewed into the atmosphere and were spread over great distances as the blast cloud dissipated. Here, the radiation had been contained in the mist of water, and had fallen directly back into the lagoon, down onto the ships. Even the vessels that survived the blast were so radioactive that initial levels were 20 times a lethal dose.

Still, the Navy thought the ships could be saved. The captains of the target vessels wanted their ships back, and Rear Admiral Thorvald Solberg, who was in charge of decontamination, believed the ships could be washed down and sent home. But the clean-up crews were not prepared for how thorough the contamination was. They began to hose the ships down with foam and salt water, to try to scrub out the radiation. It was a futile effort: The only way they could have cleaned them off would have required sandblasting everything down, removing every bit of wood and washing the brass and copper pieces of the ship with nitric acid.

Soon workers were hitting the daily allotment of radiation exposure—limits set to keep workers safe, which, by today’s standards, were already high. Radiation was spreading everywhere, as the clean-up crews tracked irradiated water back to their “clean” ships. Even the mussels and algae that clung to the hulls of the clean ships were now concentrating radiation and adding to the men’s exposure.

The Navy had to admit that the ships were impossible to clean. Six vessels that had been badly damaged in the blast were sunk right there in the Bikini Lagoon. Most of the contaminated ships were towed 200 miles to Kwajalein Atoll, where they would stay. A small group of the radioactive ships were towed to Pearl Harbor for examination; more were later taken from Kwajalein to Pearl Harbor, Seattle or San Francisco. But 36 stayed at Kwajalein. They were later towed out to the deep sea and sunk.

One ship, Prinz Eugen, didn’t wait for the Navy to decide its fate. After being towed the Kwajalein, the leaking vessel capsized in relatively shallow water. The wreck is still there, propellers to the sky.

The Rest of the Tests

There was supposed to be another underwater test in 1946, but after the impact of Baker, the test was canceled. The next time the military tested a nuclear device underwater was in 1955, during Operation Wigwam, which was meant to test nuclear weapons for use against submarines. This device was planted deeper, at 2,000 feet, 500 nautical miles southwest of San Diego.

Again, nuclear scientists were skeptical: The Atomic Energy Commission would not sign off on it until it was clear that no one in the United States or Mexico was at risk and that the test area was relatively free of marine life. But the military wanted to know at what range a 30-kiloton explosion could split the hull of the submarine—and if a ship on the surface of the water could send a bomb deep into the ocean without harming itself.

Compared to Baker, this test went smoothly, but it was still more destructive than anticipated. USS Tawasa, which carried scientists meant to observe the explosion, was badly damaged, and again a mist of radioactive water spread over the boats. According to the military, no one was exposed to a dangerous dose of radiation. But some of the men who participated died early of cancer, and their families believed the test was to blame.

The U.S. government only tested nuclear weapons underwater three more times. In 1958, as part of Operation Hardtack, the military set off another deep water detonation and another lagoon detonation. In both cases, the devices were smaller than their predecessors, and there were few surprises in the outcome of the tests.

In 1962, the year before the Partial Test Ban Treaty was signed and became effective, there was one last test, Swordfish. That one went off without a hitch.

This story was updated with minor edits on October 18, 2018.

Found: Vessels That Let Your Immune System Control Your Personality

The brain and lymph system are connected after all.
underwater weekbombsnuclearshipwrecksfeatures

How realistic was the shipwreck Ariel looted?
atom bombs

Oak Ridge, Tennessee, once home to 75,000, went up fast and under the radar. But it was built to last, too.
nuclear

In 1960, a test of a Titan I missile went smoothly until the very end.
Video