The Italian Village Where the Houses Have Eyes - Atlas Obscura
Want to see fewer ads? Become a Member. 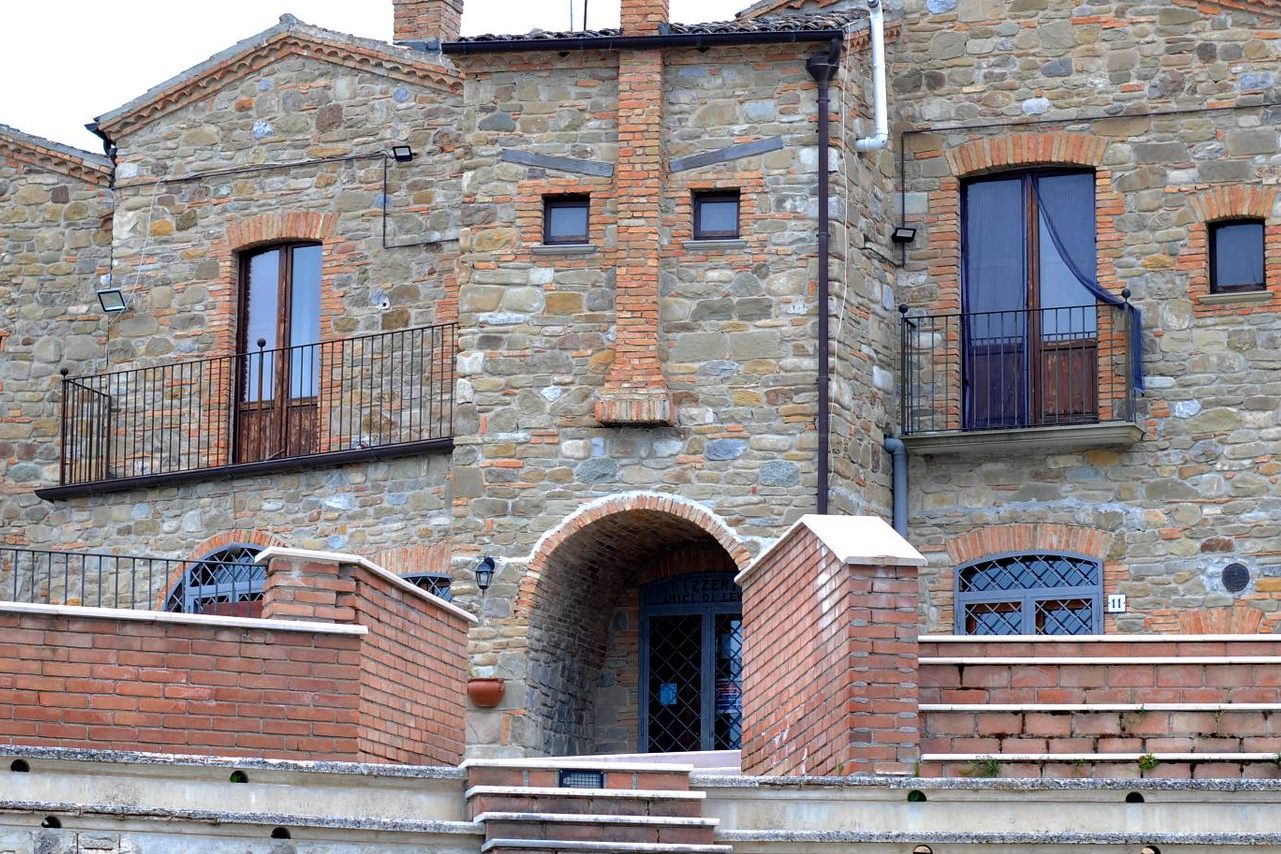 This anthropomorphic house in Aliano was rebuilt, following the direction of architect Lodovico Alessandri. It now hosts a pizzeria and rooms for tourists. Federico Formica
In This Story
Destination Guide

Lodovico Alessandri remembers the first time he saw the town of Aliano, in 1994. He was “nauseated,” he says, by what seemed to him “a completely broken country,” a decaying hilltop town in a rural area in the instep of Italy’s boot. Fifty-nine years before, the Piedmontese intellectual and artist Carlo Levi had had a similar reaction: “Everything was unpleasant to me,” he wrote. In 1935, Levi was arrested when he reached the region, Basilicata (called Lucania, at the time). He would be confined in Aliano for his anti-fascist ideas, so he can hardly be blamed for his reaction.

Yet this patch of Italy and its people seduced both of them. Levi, who spent a year there, made Aliano famous with his book Christ Stopped at Eboli, an account of his exile in Aliano, which has been translated into more than 30 languages and put a spotlight on the misery of southern Italian peasants. After fascism, Levi returned several times to Aliano as a free man and wanted to be buried there, despite having come from the opposite side of the country.

Alessandri, an architect from Rome, has never stopped frequenting the village since that first encounter, and has organized many initiatives to transform it from decaying to vibrant (if on pause due to the pandemic). This included renovating Levi’s house, with everything inside intact. “Sixty years had passed since those events [in Christ Stopped at Eboli],” he says, “but Aliano has remained crystallized: Everything was like in the book.”

From his first visits, however, the architect also noticed another peculiarity of the town, something that no one had ever mentioned, not even Levi. Many houses, scattered here and there, have faces: an arch as a mouth, a protruding chimney as a nose, two windows as eyes. And depending on the shape and position of the windows, the houses even have expressions: frightening, surprised, frowning. They are known as the case con gli occhi—the houses with eyes.

“I noticed a perfect symmetry. And it couldn’t have been accidental: It was absolutely not necessary to build them just that way,” he says. In observing and studying this architecture, which, according to him, dates back to a period between the 18th and 19th centuries, he found the pattern in the homes of peasants as well as wealthier families. So the architect has developed a theory: “It is like if those faces were apotropaic masks that someone applied later to the real facade of the building. In fact, the materials used to make the mask are often different.” Apotropaic masks are scary faces that, in the past, were applied to the facades or pediments of buildings to ward off negative influences. Despite his research, the architect has not found any testimonies or texts that directly explain the “mystery” of the houses with faces.

“In the Lucanian culture, but not only, the eyes can wield great power. A person who stares at you with insistence, with malice or with envy, is casting an evil eye [malocchio in Italian]. People often blamed the evil eye for a disease or a negative event. Malocchio is something capable of bringing bad luck,” says Caterina Pontrandolfo, an artist and anthropologist who has conducted research and interviewed many elderly farmers in Aliano and its surroundings. “Houses with eyes can have a protective function. A way of saying, ‘If you look badly at my house, then the house will look badly at you in turn.’” So these buildings were “living” witnesses of old beliefs and superstitions that have persisted, even to the present day. “Our grandmothers did not tolerate cameras: There was a belief that this ‘mechanical eye’ could steal something from them,” adds Pontrandolfo.

Teresa Lardino, a guide and photographer born in Aliano, where she still lives, says that one day she was trying to photograph an elderly woman, but the woman destroyed the lens of her camera with a stick. “We knew each other but she didn’t realize it was me,” she says.” A few hours later she came to my home to apologize to me.” The threatening expressions of the houses serve to protect those who live there from such an unwanted gaze, and there are other protective traditions. In many families, the last person to go to bed during the winter nights draws a cross on the ashes of the fireplace that has just been extinguished to prevent malicious presences from entering through the chimney. This, some inhabitants of the village say, is still a widespread custom.

But Aliano, like many villages in the Italian countryside, has struggled with migration, decline, and change. Many houses with eyes are now gone. Some have collapsed from neglect. The old part of the village is built on sand and clay, and landslides have dragged homes, stables, and roads into the ravines that surround it. In other cases, facades have been rebuilt or restored, losing their original human features.

In 1998, the newspaper Il Giornale published an illustration of Aliano by Alessandri. It portrayed Piazza Garibaldi, where the town’s municipal offices are located. In the drawing—a faithful reproduction—there are five houses with eyes. Today only one is left in that square. “When I started going to Aliano, an important seismic consolidation project had already started,” he explains, “and the mission was to secure all the houses. Unfortunately, however, the projects did not take this feature into account. That means that such a unique testimony of the local culture was erased.” The only surviving example in the piazza was saved by Alessandri himself. “The mayor at the time showed me the restoration project and asked me for an informal opinion. I immediately noticed that instead of the ‘nose,’ it was planned to build a bathroom: Even that building would have been irreparably modified. I talked with the engineer and we were able to change the project, preserving the facade.”

For the buildings that do survive, time is not on their side without intervention. “We are talking about poor architecture. The houses were built with stones and earth mixed with horse dung, then baked in the sun. When it rained a lot, these buildings tended to collapse. Without maintenance, the roof first gave way, then the water attacked the bricks which, without any more protection, melted. Eventually the building collapsed,” says Alessandri. One of the most beautiful no longer exists. Alessandri chose to make that building the narrator of his book La casa con gli occhi, in which he interweaves real events, such as the phenomenon of the bandits in the 19th century, with old local legends. He had begged the owner to save that house, but “the storms and thunder, indignant, preferred to erase it so as not to prolong his agony,” he says, a little bitterly.

Today only a handful of the anthropomorphic houses remain. Two are in excellent condition and are the best known: the one in the town square and another at the entrance to the town, which was demolished and rebuilt as part of a redevelopment that the architect designed himself. It houses a pizzeria.

In the old town some others have recently been renovated. Along the maze of alleys of ancient Aliano, there are many construction sites. “The municipality is acquiring all the historic buildings in the town to renovate them,” says mayor Luigi De Lorenzo. Some buildings, including one with the eyes that was rebuilt from top to bottom, have become part of a “scattered hotel,” in which rooms are dispersed across historic buildings of the village. “Before Covid-19, we were the second cultural tourism destination in our region, with 20,000 visitors a year,” says De Lorenzo. The mayor and many Alianes hope that the art and culture festival La luna e i calanchi (“The Moon and the Badlands”) will return in the summer, with conferences and live performances. “In those days Aliano was unrecognizable, swarming with people. I’m almost afraid it might collapse under the weight of so many men and women,” jokes the guide, Lardino. In the meantime, the eyes of these houses are watching an empty town, much like the Aliano that Alessandri had first encountered some three decades ago.

Built from recycled materials by an eccentric con artist in the 1930s, the curious creation was demolished—and then reborn.
architecture

A rich local history has long been overshadowed by a few months under a Russian flag.
Video • AO Docs