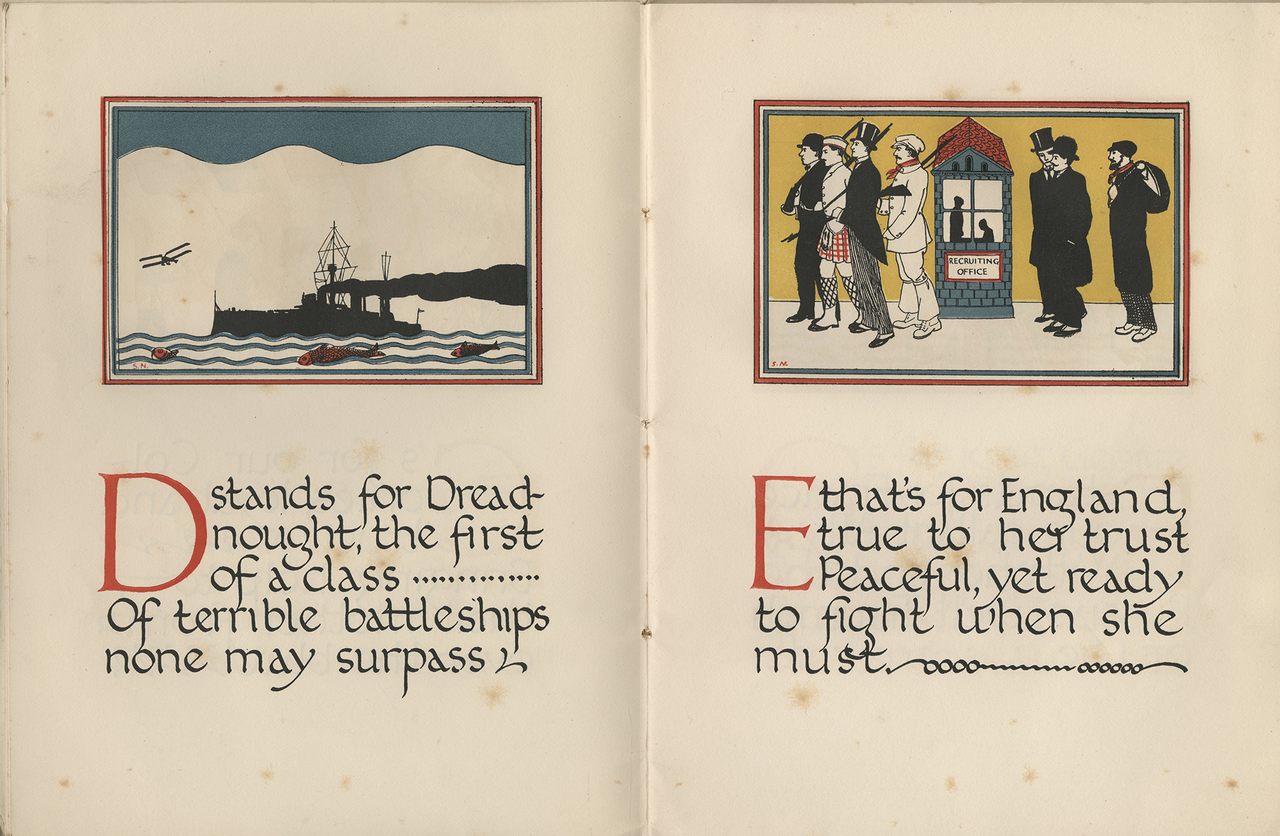 From The Child's ABC of War, 1914. All Images: Courtesy Florida State University Archives

A stands for Austria, where the first bomb was hurled/The Bomb that was destined to startle the world. So begins The Child’s ABC of the War, a book that teaches the letters of the alphabet not through animals or objects, but through a particular British view of the world and World War I. Printed in London in 1914, it was intended for three-year-old boys. The copy shown here, from the Florida State University’s digital repository, was given as a Christmas gift, with a handwritten inscription: “with love and best wishes.”

What follows is the alphabet rendered in weapons, details of the war, and the Imperial British worldview. B is for Belgium, the “brave little state,” and C is for Colonies, “loyal and true.” For a book intended for small children, it doesn’t shy away from violence: T for Torpedo/It shoots under water/Dealer of death and disaster & slaughter.

Unsurprisingly, there was some opposition to the book when it was published. In the 1915 issue of Kindergarten Primary Magazine, the “Chairman Peace Committee” Lucy Wheelock wrote, “Picture books such as The Child’s ABC of War … foster the spirit of antagonism and revenge and are not desirable influences in child life.”

Britain produced other WWI-specific children’s books. Why Britain Went to War: To the Boys and Girls of the British Empire explains the conflict with a uniquely British analogy: “ … we are standing up for honor among nations, while Germany is playing the sneak and the bully in the big European school. Germany must be taught to play cricket, to play fair … A boy who behaved as Germany has done would be sent to Coventry by all the school.”

Little Miss Muffet,
Sat on a tuffet,
All on a summer’s day,
When a bomb (‘twas a dud)
Came down with a thud,
And frightened Miss Muffet away.

However, it wasn’t just Britain that filled children’s books with wartime messages and propaganda. The 1915 German book Hurra! Ein Kriegs-Bilderbuch (Hurray! A War Picture-Book) tells the story, in verse, of two little boys killing the enemies of Germany and Austria-Hungary. And in France, André Hellé wrote Alphabet de la Grande Guerre (Alphabet of the Great War), “for the children of our soldiers,” which included C for Charge, T for Trench, and S for Submarine.

Atlas Obscura has a selection of images from Britain’s The Child’s ABC of the War.

Found: A Hidden Request on the Back of an Ancient, Rare Pottery Shard

It’s one guy asking another to send some wine and food over.
children's literature weekwwiworld war ivisualphotographywar historymilitary

A new exhibit reveals the wondrous sights service members found away from the trenches.
wwi

The five-day fever was made famous during World War I, but has been a constant companion of poor hygiene.
wwi

The clacking of needles was heard from coast to coast.
animals

2:40
Want to see fewer ads? Become a Member.
From Around the Web
Thanks for sharing!