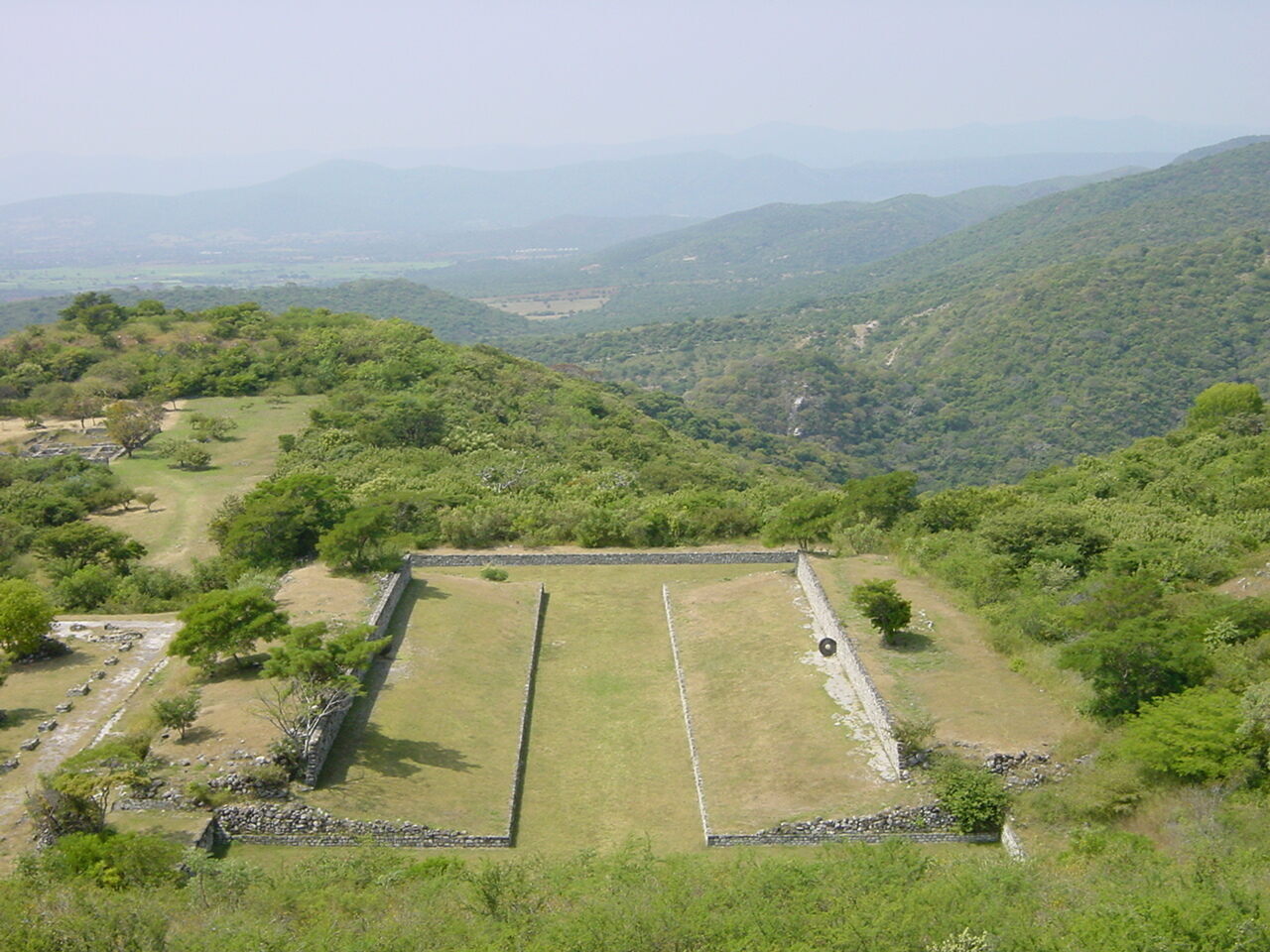 The structure of these ancient ballcourts varies a bit, but at each site there's a consistent pattern: a playfield framed by two embankments. Maxtreiber / Public Domain
In This Story
Destination Guide

Rubber balls made their first European appearance in 1528, in the court of King Charles V of Spain. The courtiers who witnessed it were astounded. The balls were used in an exhibition match of an old Aztec ballgame, featuring two full-strength squads of Aztec players who’d been forced across the Atlantic by the Spanish conquistadors.

But Mesoamerican ballgames were already ancient when they debuted in 16th-century Spain. Evidence of them goes back thousands of years. Until now, however, that evidence has been confined to the areas that produced rubber: the lowlands around Chiapas and Veracruz, Mexico, the latter of which was once home to the ball-playing Olmec people.

Archaeologists have now identified an early ballcourt from the Mexican highlands of Oaxaca—indicating that the pastime was more far-reaching than previously suspected.

The court was recently excavated by Víctor Salazar Chávez and Jeffrey Blomster, archaeologists at George Washington University, in collaboration with the Instituto Nacional de Antropología e Historia of Mexico (INAH) and independent researchers in the town of San Mateo.

Along with the ballcourts at Etlatongo, the team found small figurines of ballplayers, which confirmed that the site was indeed a field of play.

The research, published in the journal Science Advances, “suggests that the highlands, especially Oaxaca, was a really important player in this template for what a ballcourt should look like,” says Blomster. “The idea of two long parallel mounds with an alley—that’s a template that exist[ed] until the Spaniards [arrived].”

The newly discovered ballcourt—found beneath another, later court on the same site, on a hill in the village of Etlatongo—dates to 1374 BC, making it the oldest in the highlands by 800 years, and the second oldest in all of Mesoamerica. The discovery began with the excavation of a large stone wall, the purpose of which was at first hard to discern. It turned out to be a platform for the ancient Mesoamerican sport.

“We kept trying to find a corner to this wall, and it just kept going and going,” Blomster says. “We weren’t even thinking of looking for a ballcourt.”

With today’s sporting world put on hold—along with everything else right now—it’s a good time to put things in perspective, and give credit where credit is due. Long before the NBA or the Olympics—even the ancient ones—Mesoamerican ballgames were in full swing. They were played in venues big and small, in prominent stadiums and in rural villages. Some iterations were played using players’ hips and rumps to strike the ball; others required sticks to bat it around.

The architecture of the court—with its steep walls and high, circular goalposts—often became part of the game, with players bouncing the elastic rubber ball off the stone. Some versions of the game are well known to archaeologists; others are shrouded in obscurity. Like reverse engineering the rules of a board game using just the board and its pieces, ballgame archaeologists often have only the sport’s architecture to interpret.

These ancient ballgames could be recreational, but often had political or religious significance, and implications off the field, such as debt settling or sacrifice. If rugby is a hooligan’s game played by gentlemen, and soccer is the opposite, Mesoamerican ballgames were in a league of their own—equal parts intense creativity and high-stakes competitiveness.

They were also social events par excellence, and many Mesoamerican communities’ traditions were intertwined with the games.

“The ballgame was linked to creation stories, sacred events of heroic/mythical ancestors, and also a key element of the history of the revered sacred ancestors of rulers,” says Michael Blake, an archaeologist at the University of British Columbia who is not affiliated with the recent study. “Yet versions of the game were also played in smaller communities and engaged in by many everyday people—who probably played versions of the game in open fields and not in elaborate courts, as the elite members of society did.”

The court layout is consistent across the thousands of ballcourts that have been found over the years: a flat gulch separating tall stone or earth embankments on either side, forming the perimeter of the field of play (imagine a giant earthen Kit-Kit, snapped in half).

At Etlatongo, there was also considerable infrastructure. The ballcourt had stone walls, was lined with benches, and had a total area of about 13,000 square feet—roughly the size of three McMansions.

Though the courts were ubiquitous across Mesoamerica, different communities had different rules and styles of play. Unfortunately, few of these rules were ever written down—not even by the historians in King Charles V of Spain’s court, who doted on descriptions of the rubber ball rather than the game or the court.

“They never had the decency to describe the rules of the game,” Blomster says wryly. “What we’re doing is using bits and pieces like the costumes on the figurines to decide the kind of ballgames that would’ve been played.”

While theories abound regarding the origin of the ancient sport and the exact rules of each variation, what’s certain is that many Mesoamericans were playing. Lowland and highland groups had long-standing, complex interactions, Blomster says. And the spread of the game was likely a product of those same connections. The ballcourts at Etlatongo—just a quarter millennium younger than the oldest court found (by Blake, in Chiapas)—speak to a contemporaneous development of the ancient sport elsewhere in Mexico.

“What is most important about this new research,” Blake says, “is that it shows the great antiquity of the game and its formally constructed courts in the highlands of Oaxaca.”

Artists are bringing back Amabie, a 'yōkai' associated with protection from disease.
sportsancientarchaeology
Keep Exploring
ancient

John Beasley Greene photographed early European archaeology in Egypt—but he paid little attention to those who lived there.
science

The clay vessels are shaped like mythical animals.
temples

From Kushites to Christians, an old site in Sudan has new stories to tell.
Video

The newly dated remains were found amid thousands of other bones on an Indonesian island.
Read more
Thanks for sharing!