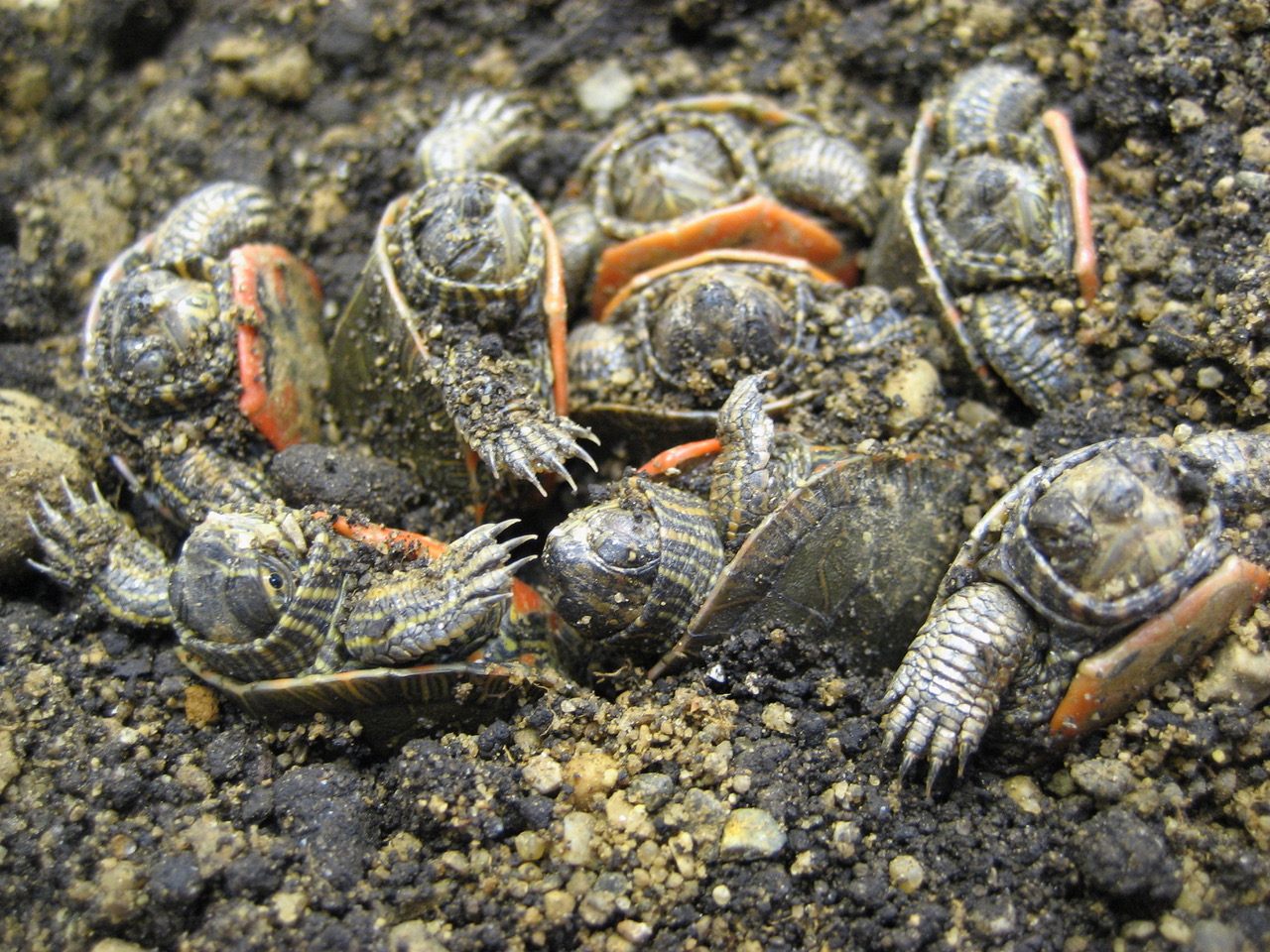 Painted turtle hatchlings can spend a winter burrowed in the sand where they're born, and freeze tolerance helps them survive it. Laboratory for Ecophysiological Cryobiology, Miami University
In This Story
Destination Guide

Biologist Brent Sinclair has a few critters he’s eager to talk about: a monstrous, grasshopper-like insect in New Zealand, a spotted alpine cockroach, and the common spring field cricket in North America. They all share one incredible trait—the ability to freeze over when it’s really cold, and survive.

It’s a phenomenon that’s unthinkable for most animals, since ice formation can destroy tissue, leading to death. Yet a number of species can withstand up to two-thirds of their body water being frozen. Insects lead the way, with anecdotal evidence of their ability to tolerate freezing first described in the 18th century. But the list also includes wood frogs, garter snakes, painted turtle hatchlings, and a certain crop of lizards in Argentina.

“The alpine weta is really spectacular,” says Sinclair, a professor at Western University in Ontario, Canada, of the New Zealand insect that’s big enough to fill a person’s palm. “You can freeze it and it thaws out pretty fast—it takes about an hour, then they’re up and running again after 30 to 60 minutes. They’re often thirsty afterward.”

The “cantankerous” species, also known as the mountain stone weta, lives in the central mountain ranges of South Island, at an elevation of around 3,300 feet. Temperatures in the low tundra habitat can fluctuate 50 to 60 degrees in a day, and hard frost or snow is possible, even in the middle of summer, says Sinclair. It’s clear why the ability to freeze and thaw would be an essential adaptation, especially in the winter. The same goes for Sinclair’s other favorite inhabitant of the area: a wingless cockroach with five spots (Celatoblatta) that congregates in large groups.

While a scientific understanding of freeze tolerance in insects was first achieved in the 1930s, it wasn’t until 1982 that scientists discovered it also exists in vertebrates—wood frogs in particular, a far-reaching North American species that can be found from the forests of Georgia to just within the Arctic Circle in Alaska.

“It was a huge breakthrough because until that time, it was assumed that vertebrate animals could not survive freezing,” says Jon Costanzo, professor emeritus at Miami University in Ohio, who got interested in cold-temperature adaptations after stumbling across a den of wintering snakes (known as a hibernaculum) while he was a graduate student in Wisconsin.

Wood frogs can survive temperatures as low as -4 degrees Fahrenheit, the coldest temperature that any freeze-tolerant species is known to withstand, he says. (A Siberian salamander was reported decades ago to have survived -22 degrees, he adds, but the report is unconfirmed.)

When the freezing process starts, the frogs’ livers produce large amounts of sugars that act as a kind of antifreeze—in biological terms, a cryoprotectant—that helps limit the amount of damaging ice that forms inside their bodies. Water also gets redistributed to protect tissues and organs from fatal injury. This is thought to be a common mechanism for freeze-tolerant species, though the cryoprotectants can vary and the specifics of how things work are still not well understood.

What is evident is the amazing transformation that can take place. As the wood frog freezes, its heart slows down and eventually stops beating, and its lungs stop functioning. “The animal is about as close to being dead as you can imagine,” Costanzo says. A layer of ice coats the frog, which goes stiff and cold as ice pervades its tissues and organs. And it can remain that way for several months at a time.

Costanzo notes that freeze tolerance evolved to allow amphibians and reptiles that originated closer to the tropics to expand their geographic ranges into colder environments farther north and at higher elevations.

In the Salta Province of Argentina, just outside the tropical zone, biologist Robert Espinoza has been studying lizards at elevations from around 5,000 to 14,000 feet. Recent work by him and his colleagues have found six species of Liolaemus lizards to be freeze-tolerant.

The lizards live in high-elevation deserts with dramatic temperature swings, much like the alpine weta’s habitat. “The lizards aren’t much longer than a forefinger, and can heat up really quickly when the sun’s out,” says Espinoza, from California State University, Northridge. Cloud cover cools things quickly, he says, and if the lizards aren’t fast enough to take shelter under a rock or burrow, “they could freeze on the surface until the sun hits them next.”

All this makes one wonder: Doesn’t a frozen critter make a tasty morsel for a hungry predator? Sinclair reports that yes, a colleague in Fairbanks, Alaska, has told stories of finding frozen frogs under leaf cover, being nibbled upon by shrews.

How to Make Ice-Cream Cocktails Like a True Wisconsinite

The evolutionary marvel mates in love trains, can swim in the ocean, and even uses jazz hands as a defensive tactic.
animals

From a flightless giant heavier than a polar bear to a super-glider with a 24-foot wingspan, avians ancient and modern compete for the crown.
islands

Oversized, fluffy rodents in the Philippines may have been hunted by our evolutionary cousins.
Video