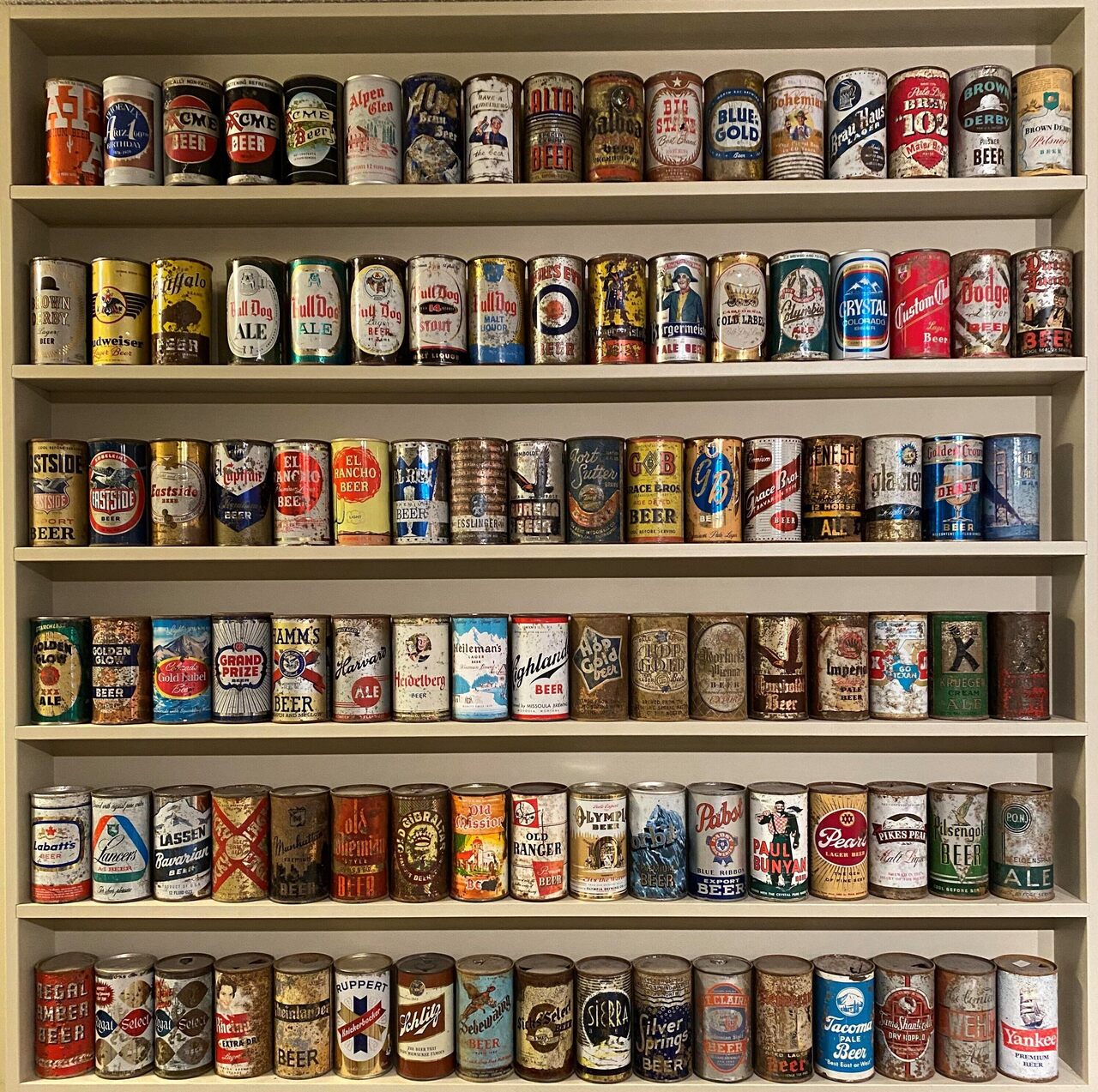 Hundreds of beer cans are displayed in Maxwell’s home, organized first by country and style, then arranged alphabetically by brand and age. Courtesy of David Maxwell

David Maxwell’s office at Simon Fraser University could easily be mistaken for a dorm room. The walls are plastered with antique beer signs, which, when turned on, illuminate the small space in a neon glow. Beer cans are lined up like trophies on top of the bookcase and prop up archaeology textbooks. Maxwell is not just an avid collector of breweriana; he’s also the world’s foremost—and probably only—archaeological scholar of beer cans.

For most people, archaeology conjures images of timeworn tombs and temples. But archaeologists have long relied on garbage, whether sherds of pottery or empty beer cans, for insight. Trash is a testament of daily life. Regardless of its age, it represents a wealth of information about the society that produced it.

“You could argue that trash is one of the things that make us human,” Rebecca O’Sullivan, a public archaeologist, said on an episode of her podcast, The Materialists. “There’s truly nothing that archaeologists love more than garbage.”

When canned beer was first introduced in 1935, the ease of littering cans—in contrast to refillable glass bottles that customers returned for five-cent refunds—was a major selling point. “You throw the cans away when you’re through with them,” wrote The Evening Sun on August 5, 1935. Over Zoom, from his house in British Columbia, Maxwell shows me the back of a Rainier beer can from 1938. “You got this little panel on the back telling you, ‘No returning necessary. Throw away when empty,’” he says. “Which is a godsend for collectors and archaeologists.”

Maxwell has long been fascinated by the detritus of daily life. As a child, he collected hundreds of bottle caps off the streets of Burnaby, British Columbia. “I liked them because they were shiny,” he says with a smile. Several years later, his family bought a summer cabin in Washington State, which exposed the budding archaeologist to a whole new world of treasure: beer cans.

While canned beer sales exploded in the United States after World War II, the industry failed to take off in Canada until the 1980s. “When I was a kid, all the beer came in the same shape bottle,” says Maxwell. It made the cans strewn along the Mount Baker highway seem all the more magical.

For much of the 1900s, littering was socially acceptable. Drivers and passengers tossed empty cans, gum wrappers, and half-eaten lunches out the window as they cruised down the highway.

In 1969, a study conducted by the National Research Council’s Highway Research Board found an average of 3,279 littered objects per mile across 29 states. The roadside refuse built up over time, and its remnants continue to yield insights into mid-century leisure and consumption.

For Maxwell, this trash was a treasure trove. “The cans were weird and old and mysterious looking,” he says. “They had punches to open them instead of pull rings, and all I knew was that they predated me.” Maxwell learned to decipher their stories by pouring over collectors’ guides and trade magazines, and summers spent hunting along the highway developed into a lifelong passion for collecting and studying beer cans. Over the decades, Maxwell amassed 4,500 cans, which he recently cut down to 1,700 due to a lack of storage space.

Officially, beer-can archaeology is a passion project for Maxwell, who trained as a Mayanist, became an expert in animal bones, and works as an instructor at Simon Fraser University. Still, as an avid collector, Maxwell recognized early in his career that beer cans contained chronological and cultural data that could yield valuable insights. Archaeologists study material culture, but few academics have the time or motivation to meticulously research all of the subtle stylistic variations that occur to one object over a period of time. In contrast, individual collectors and formal clubs have published a wealth of research on the dating and production of beer cans.

“Collectors are a fabulous resource for academics,” says Maxwell. “These are the guys who do the grunt work. I can’t think of anyone else who would do that except someone who is obsessive about what it is that they are collecting.”

In 1993, he published a field-identification guide in Historical Archaeology, which has since become an industry standard and his most-read work. Maxwell’s paper traces the evolution of the beer can throughout the 20th century, which helps archaeologists date their sites and draw conclusions about human behavior by identifying features pegged to different time periods.

“If you can read the label, one of the first things to look for is whether or not it says Internal Revenue Tax Paid on it,” says Maxwell. (All beer cans manufactured between June 1, 1935, and March 30, 1950, contain this statement, except for those designated for military use during World War II.) If the label is long gone, he looks at features like the size and shape of a can’s punch hole. Over time, so-called “flat top” cans got lighter and thinner, and so did the churchkeys used to open them (until the invention of pull tabs in 1962).

In 1997, Maxwell was hired to assess a U.S. Air Force base in California, which was believed to have been unoccupied before World War II. During his survey, though, Maxwell discovered a pile of beer cans from the 1930s. Although too rusted to read, the flat-tops had large punch holes and the cone-top cans all had low profiles (rather than the longer, high-profile neck that appeared after World War II), both of which indicate a presence at the site prior to 1942.

Maxwell’s work blurs the line between rubbish and relic, raising the question of when beer cans become valuable artifacts worthy of study and preservation. But in many parts of the country, any object on public land that is at least 50 years old is considered historic and therefore eligible for protection under the National Historic Preservation Act of 1966—as long as they meet certain criteria. This makes the ability to date beer cans a useful skill for archaeologists.

While Maxwell spends most of his time lecturing about prehistoric societies, he continues to find time to put his pastime to professional use. Every few months, he receives an email from a colleague who needs help dating a beer can recovered from an archaeological site, often to determine whether it’s old enough to require official documentation and evaluation.

A few years ago, a colleague sent Maxwell a picture of a beer can from a site in Reno, Nevada, which Maxwell identified as a late-1930s can made by Maier Old Label in Los Angeles. Despite being old and anomalous for the region, the can wasn’t considered worthy of preservation, by legal standards at least. “Which gets back to the question of trash,” Maxwell tells me with a smile. “As payment, he sent me the can, because he wasn’t allowed to curate it.”

The limestone cliffs harbor hundreds of passages that offer glimpses into the distant past.
beer

Many associate beer and spirits with disease and colonialism.
Video

Scientists are partnering with brewers to taste test ancient recipes and sip a long-lost past.
Read more
Thanks for sharing!