Could a Tree Help Find a Decaying Corpse Nearby? - Atlas Obscura
Want to see fewer ads? Become a Member. 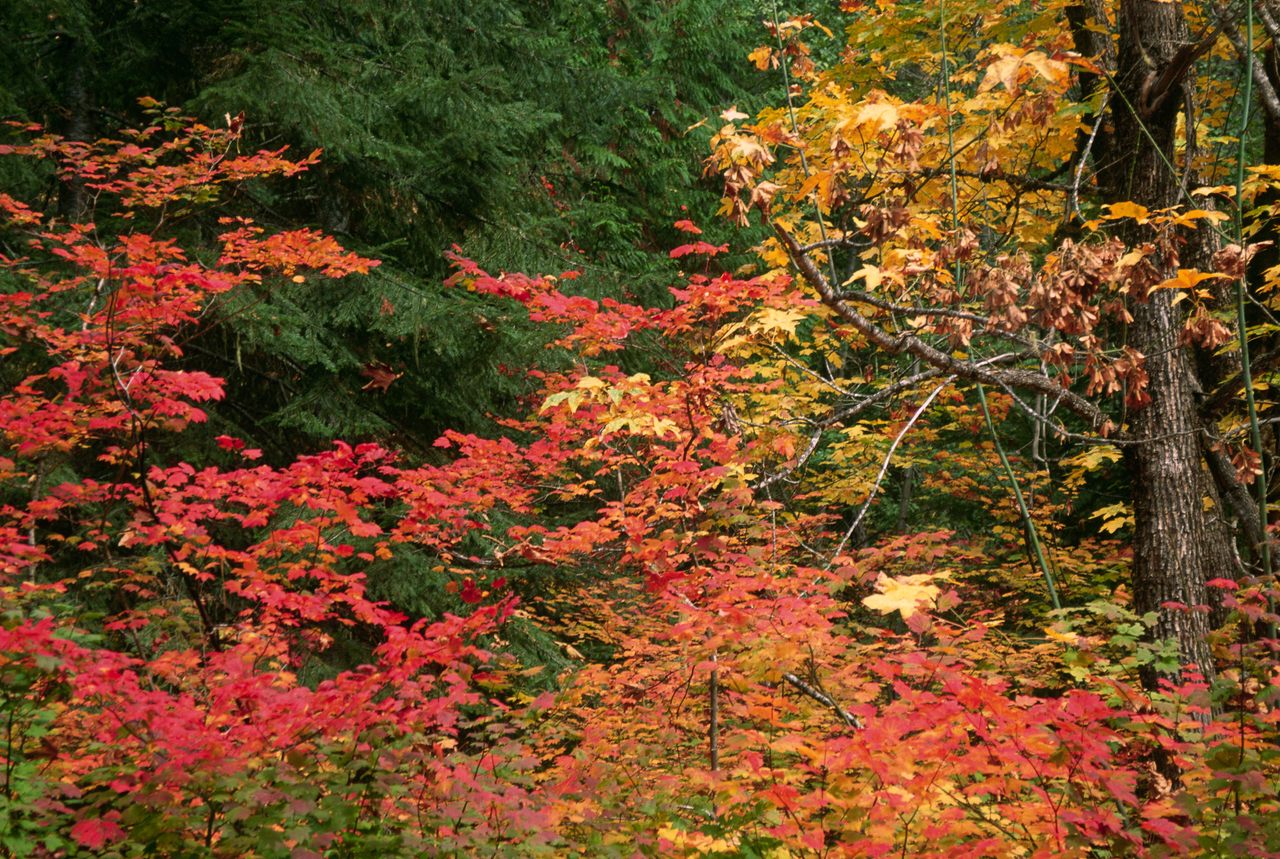 Could the colors of leaves indicate something beneath? U.S. Forest Service- Pacific Northwest Region
In This Story
Place

Better known as the "Body Farm," this unique research facility has been studying how human bodies break down since the 1980s.
Destination Guide

Since 1980, the University of Tennessee’s Forensic Anthropology Center has plumbed the depths of the most macabre of sciences: the decomposition of human bodies. Known colloquially as the Body Farm, here scientists examine how donated cadavers decay, like how the microbiomes inside us go haywire after death. That microbial activity leads to bloat, and—eventually—a body will puncture. Out flows a rank fluid of nutrients, especially nitrogen, for plants on the Body Farm to subsume.

That gave a group of University of Tennessee, Knoxville researchers an idea: What if that blast of nutrients actually changes the color and reflectance of a tree’s leaves? And, if so, what if law enforcement authorities could use a drone to scan a forest, looking for these changes to find deceased missing people? Today in the journal Trends in Plant Science, they’re formally floating the idea—which, to be clear, is still theoretical. The researchers are just beginning to study how a plant’s phenotype—its physical characteristics—might change if a human body is composing nearby. “What we’re proposing is to use plants as indicators of human decomposition, to hopefully be able to use individual trees within the forest to help pinpoint where someone has died, to help in body recovery,” says UT Knoxville plant biologist Neal Stewart, coauthor on the new paper.

As a large mammal like a human decomposes in a forest, its breakdown transforms the soil in a number of ways. The body’s “necrobiome”—all the bacteria that was already in it when it was alive—replicates like crazy in the absence of an immune system. This necrobiome mixes with the microbes in the dirt. “The soil microbiome will change and, of course, the plant roots will also sense some changes,” says Stewart. But, he adds, “we don’t really know what those changes are.”

Also, it’s still unclear how the gases emanating from a body might affect plants in the area. Plus, a cadaver attracts a horde of opportunistic critters that further complicate the dynamics at play. Scavengers like vultures might pick at a body, while flies might lay eggs that hatch flesh-eating maggots. These larvae can appear in such numbers that another group of researchers found they form squirming rivers around pig carcasses left in the forest. Visiting animals may also contribute their urine and feces to the noxious mix. Which is all to say that while the soil microbial community will change, so too will the animal community above, with as-yet-undetermined effects on plants in the vicinity.

One factor that Stewart’s team is considering is the cadaver’s role in delivering nitrogen to the soil. As it decomposes, the body floods the ground with the chemical—maybe with too much nitrogen, in fact, for some plant species like grasses, which initially die back around a cadaver. In the longer term, this nutrient helps plants grow, so the later vegetation bounces back. But how plants might bounce back—whether those plants look any different because of this infusion of nutrients—is unclear. “Surprisingly, nobody that I can tell has ever really studied this in any systematic way,” says Stewart.

So Stewart and his colleagues set out in June to do exactly that. “Right now, for the Body Farm study,” says Stewart, “we’re basically just taking the trees and shrubs that are growing naturally within our plots, then placing donors—as they refer to them—and then looking at leaf responses, plant responses, at various distances.” Because this work began only a few months ago, the researchers don’t yet have data to share. But next year, they plan to take soil exposed to decomposing human bodies and apply it to plants in a greenhouse to see whether it changes the appearance of their leaves. “A controlled study, a replicated study,” Stewart says.

There are a few ways a leaf response could play out. For one thing, the leaves might reflect more or less light, or change in color—getting greener or even red, for example. “We’re definitely looking at green, but we’re also looking at all wavelengths within visible light, and then also those on either side of the visible,” says Stewart. For instance, the chlorophyll in plant leaves fluoresces, reemitting light that special optics can pick up. This signature is invisible to the human eye but not to existing technologies. It’s known as hyperspectral sensing. These devices can actually see across the electromagnetic spectrum, including visible and infrared light. Fluorescence specifically is an indicator of what’s in a plant leaf’s cell walls. Stewart and his colleagues reckon that an amino acid like phenylalanine, which is released from a dead body, could cause leaves to fluoresce in a distinct way.

Because different kinds of plants fluoresce differently, authorities are already using this technology to spot cannabis and poppy grow operations. Farmers and scientists use it for other kinds of agriculture too, because chlorophyll fluorescence is an indicator of productivity. “Hyperspectral imaging has been used to correctly classify pork and other animal fats and is also used for nutrient soil management in detecting phosphorus and other nutrients,” says Mississippi State University environmental microbiologist Heather Jordan. (She does the aforementioned work on pig carcasses but wasn’t involved in this new study.)

But to use this technology to find the remains of missing people, Jordan adds, “there would be a need to differentiate effects from human decomposition with those from other animals’ decomposition.” Humans, after all, aren’t alone among large mammals. Hogs, deer, bears—you name it, and it’s rotting out there in the wild, flooding the soil with the same nutrients a human cadaver might.

However, there could be subtle differences in how plants respond to the decomposition of different kinds of mammals. We humans have distinct microbiomes, for instance, and different fat content than, say, a bear. “I think once we find our key spectral signatures, we can then think about doing a comparative study with other large mammals,” Stewart says.

Another challenge is the variability of decay. It’s one thing to fly a plane over a forest and spot a cannabis grow operation with hyperspectral imaging, but “that’s very different than a randomly located dead person decomposing at an unknown rate,” says Mississippi State University ecologist Brandon Barton, who collaborates with Jordan. Any number of variables influence how a dead organism releases the nutrients and microbes that might affect surrounding vegetation, like how hot it is or how much moisture is out there. All of this, he says, is “a lot of background noise.”

And in Barton’s experiments with pig carcasses, the body often doesn’t stick around for long—at least not the flesh—so ultimately not all the nitrogen stored in a body will be available as a fertilizer. “The chances of all of that nitrogen entering the soil is pretty low,” he says. “Because flies are going to consume tons of it. If a coyote comes along, it will consume a bunch of it. Vultures, crows, all these organisms will be removing it.” If a plant’s leaves change only a little in response to a smaller dose of nitrogen than they would have received if a body was left undisturbed, that could make it challenging for searchers to find a signal.

Since the researchers are just beginning to collect data on how plants might respond to human cadavers, this is all still theoretical. But imaging technology will only get more sensitive over time. Even if this system can’t distinguish humans from other large mammals, if authorities know generally where to look for a missing person, they might scan a few square miles, get some hits on where plants might be changing, and investigate each spot. Some spots might turn out to be covering the remains of deer, but one might lead them to a person. And if it works, for those people’s families, this science may one day bring closure.

"What we’re most concerned about is things can still get worse.”
Video • PinDrop