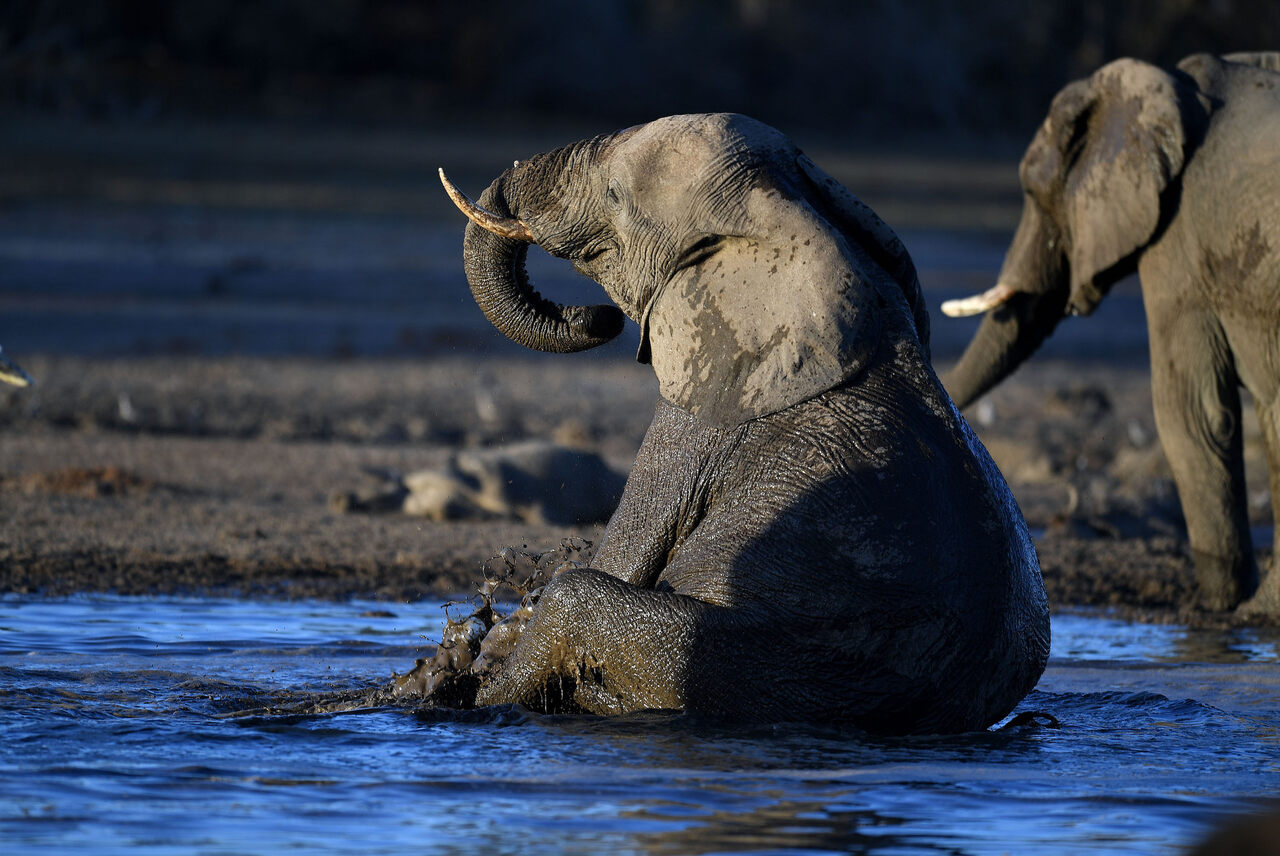 An elephant sits in the waters of the Okavango Delta in September 2019. MONIRUL BHUIYAN / AFP via Getty Images
In This Story
Destination Guide

Hundreds of elephants died in Botswana earlier this year from ingesting toxins produced by cyanobacteria, according to government officials who say they will be testing waterholes for algal blooms next rainy season to reduce the risk of another mass die-off.

The mysterious death of 350 elephants in the Okavango Delta between May and June baffled conservationists, with leading theories suggesting they were killed by a rodent virus known as EMC (encephalomyocarditis) or toxins from algal blooms.

“Our latest tests have detected cyanobacterial neurotoxins to be the cause of deaths. These are bacteria found in water,” Mmadi Reuben, principal veterinary officer at the Botswana Department of Wildlife and National Parks, said in a news conference on Monday. “However, we have many questions still to be answered such as why the elephants only and why that area only. We have a number of hypotheses we are investigating.”

Local sources suggest 70 percent of elephants died near water holes containing algal blooms, which can produce toxic microscopic organisms called cyanobacteria. Toxins were initially ruled out because no other species died, except for one horse, but scientists now think elephants could be particularly susceptible because they spend a lot of time bathing and drinking large quantities of water.

Reuben said the investigation looked at how mortality affected the elephant population and injuries on carcasses, as well as testing water samples at laboratories in Botswana, South Africa, and the U.S. He said the cause was a “combination of neurotoxins” but declined to give further details, and declined to say at which institutions tests had been carried out.

“I hope that what the government has said is true, because it rules out some of the more sinister things,” said Niall McCann, director of conservation at the U.K.-based charity National Park Rescue, who initially suggested the elephants may have been poisoned or died from an unknown pathogen. Tissue samples need to be kept in specific conditions and quickly transported to specialized laboratories, but this was not done in Botswana, which fueled speculation about potential causes.

“Just because the government say that cyanobacteria were found in the water that does not prove that the elephants died from exposure to those toxins. Without good samples from dead elephants, all hypotheses are just that: hypotheses,” said McCann.

In July, the government’s official count was 281 deaths, but this has now risen to 330. Reuben said he would be monitoring waterholes for blooms next rainy season to avoid another die-off. “It is important to monitor now to effectively detect the growth of these algal blooms in the water,” he said.

Climate change is increasing both the intensity and severity of harmful algal blooms, making this issue more likely to reoccur. McCann confirmed he was working with officials to set up regional early-warning systems.

Across the border in Zimbabwe, more than 20 dead elephants were found between Hwange National Park and Victoria Falls in August, with concerns that the two incidents could be linked. Authorities currently believe this die-off was caused by a bacterial infection.

One leading theory is that it was caused by a strain of a bacteria called pasteurella, which killed 200,000 Saiga antelope in Kazakhstan in 2015, says McCann. “There are various options. Thankfully, the U.K. government has collaborated with the government of Zimbabwe to export these samples and now they’re going to be tested in the U.K.,” he said.

If it is something relatively common, scientists should be able to detect it. “However, new emerging infectious diseases are happening all the time, and the more we look into epidemiology, the more we discover we don’t know. So it could be a complete mystery again,” said McCann.

A spokesperson from the U.K. government’s Animal and Plant Health Agency said: “Our world-leading scientists are currently running tests on samples sent from Zimbabwe, and will share findings with Zimbabwe Parks as soon as possible.”

Ships, farms, and hotels were left high and dry when 90 percent of the water disappeared.
deserts

Satellite images track the shift from dry to wet at a vast, prehistoric lake bed in southern Africa.
mines

Yuncheng Lake is one of the country's oldest salt-production sites.
lakes

Colored by algae and beloved by bathers, Lake Retba is a prime source of salt—and backbreaking labor.
Video • PinDrop

An Adorable Algae Ball Mystery Has Been Solved

Sometimes marimo float, and sometimes they sink. But why?
Read more
Thanks for sharing!