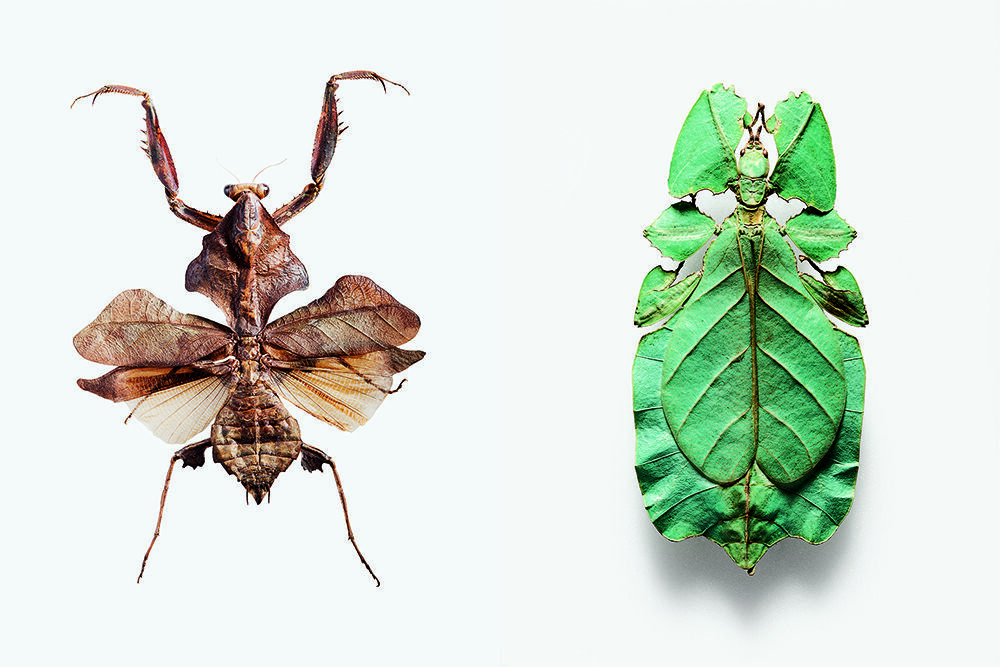 Visualizing change over time can be incredibly difficult. Which is why in a new Phaidon book entitled Evolution: A Visual Record, Robert Clark’s vivid and compelling photographs serve as an ode to Charles Darwin’s scientific breakthrough.

Beginning with text by David Quammen and Joseph Wallace about Darwin’s The Origin of Species, it is filled with photographs and facts about evolution, some of them startling. While there are rough estimates for the number of species of mammals on Earth (around 5,000) and birds (around 10,000), insect species estimates lie anywhere between 1 million to 30 million. And there continues to be discoveries, such as this giant amphibious centipede.

The adaptive skills of insects is seen in the above photo. According to the book, color and shape of both the dead leaf mantis (genus Deroplatys, left) and true leaf insect or “walking leaf” (family Phylliidae, right) changed over the years.

From insects to humans, Clark’s photographs capture a sense of wonder over life on earth. As Darwin described at the end of The Origin of Species:  ”…whilst this planet has gone circling on according to the fixed law of gravity, from so simple a beginning endless forms most beautiful and most wonderful have been, and are being evolved.”

Here is a selection of Clark’s photographs and accompanying text from the book.

“The hands of a gorilla. Despite the fact that humans are bipedal and gorillas usually walk on all four limbs, the two species’ hands are closer in proportion to each other than to those of any other ape, including Homo sapiens’ closer relative, the tool-using chimpanzee.”

“‘The combination of good sedimentary conditions and the fact that animals, including hominids, like to be near a source of water,’ the great paleoanthropologist Richard Leakey says, helps explain why the remains of human ancestors—and many other creatures—are so often found near the shores of lakes. These beautiful human footprints, about 120 thousand years old, were discovered south of Lake Natron, Tanzania.”

“Unsurprisingly, given their fragility and lack of any skeletal structure, jellyfish are rarely preserved in the geologic record. That makes some recent finds of spectacularly well-preserved specimens in Utah’s Marjum Formation (dating back to the Middle Cambrian Period around 505 million years ago) especially important. Helping clarify the origins of the Cnidaria—the phylum that also includes corals, and other aquatic invertebrate animals —these discoveries indicate that jellyfish may have evolved as long as seven hundred million years ago.”

“The five-toed foot and long, powerful tail of a saltwater crocodile (Crocodylus porosus). The first crocodylomorphs (the group that included the early crocodilians and their now-extinct relatives) included animals such as Erpetosuchus, which was small, terrestrial, and possibly bipedal. But after appearing in the Late Cretaceous Period, the true crocodiles have survived while hewing largely to the form we see today. Why have crocodilians endured so long without evolving into dramatically different forms? Like other big, aggressive predators (such as great white sharks), crocodilians rely on their size, strength, and sharp teeth to overwhelm their prey. This hunting technique is simple and effective, as its great longevity demonstrates.”

“Not so long ago, it was a controversial theory, but now it’s widely accepted: Birds aren’t just dinosaur-like; they are in fact living dinosaurs. That’s true of everything from sparrows to eagles to Darwin’s finches—but it’s rarely more obvious than when looking at a southern cassowary (Casuarius casuarius), the flightless bird native to Australia and New Guinea that at five feet tall and over one hundred pounds is one of the largest and heaviest birds on Earth. The steely gaze, the leathery crest, and the powerful beak all call the ancient dinosaurs to mind, as do the cassowary’s fearsome three-toed feet, which (much as Velociraptor and other birdlike dinosaurs must have done) it can employ as weapons.”

“The result of evolutionary adaptation can be startlingly elegant. Case in point: protective coloration or camou age in the Indian or Malayan leafwing butterfly (Kallima paralekta). (Despite its common name, the species is actually endemic to Sumatra and Java in Indonesia, where Alfred Russel Wallace encountered and wrote extensively about it.) The upper surface of the male’s wing features a relatively straightforward pattern of blue and orange — but when its wings are closed, it suddenly resembles an ordinary brown leaf.”

“Since mutations are selected for the survival advantages they provide to a species, it’s no surprise that the ability to fly has evolved repeatedly during the history of life on Earth, and in very different groups of animals. This phenomenon is known as convergent evolution. In ancient times, the reptiles known as pterosaurs—including such giants as Quetzalcoatlus, whose wingspan may have exceeded fifty feet—acquired active flight, a skill that persists in nearly all birds and bats, as well as a myriad of insects.”

“Diversity among birds isn’t found only in size, shape, habitat, plumage, and behavior. It begins far earlier. This collection of eggs (in the Great North Museum: Hancock, Newcastle upon Tyne, England), demonstrates some of that diversity as well. In nature, birds’ eggs can range from those of the bee humming- bird (the size of a pea) to the 2.5-pound monstrosities laid by the ostrich.”

The cover of Evolution: A Visual Record, from Phaidon. (Photo: Courtesy Phaidon Books)

A photographer captured water's ability to carve out new paths in all their fractal glory.
caves

Innovative photographers James and Lucy Lo created a time capsule of a sacred space at a vulnerable time.
nature

The challenge of capturing something almost impossible to see.
Video

The beautiful botanical illustrations of a 17th-century entomologist, artist, and adventurer.
Read more
Thanks for sharing!