What Water Shortages in the Western U.S. Would Mean for Craft Beer - Gastro Obscura
Want to see fewer ads? Become a Member. 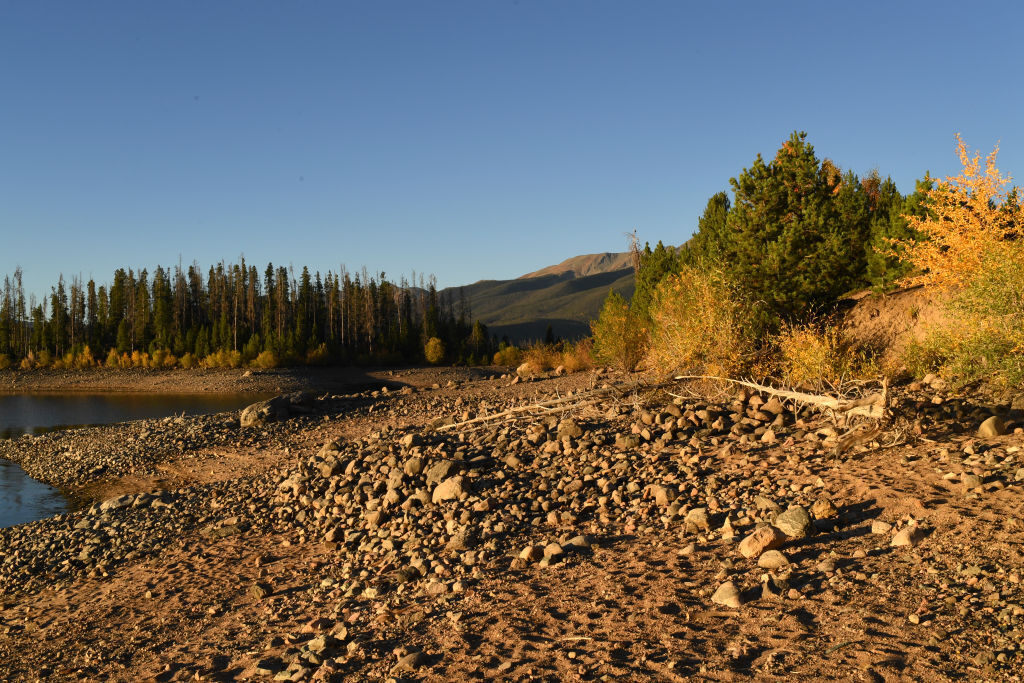 Dillon Reservoir in Frisco, Colorado, where extreme drought is drawing down reservoirs across the state, September, 2018. RJ Sangosti/The Denver Post/Getty Images
In This Story
Destination Guide

This story was originally published by CityLab and appears here as part of the Climate Desk collaboration.

There’s an old saying in the West: Whiskey is for drinking and water is for fighting over.

In Colorado, home to more breweries than almost any other state, it’s probably more accurate to say that beer is for drinking. And although brewers haven’t yet come to blows over access to their product’s main ingredient, the state’s water is on its way to becoming a fought-over commodity.

Colorado is in the midst of its worst drought since the Dust Bowl in the 1930s. The U.S. Bureau of Reclamation, which manages water in the West, predicts that reservoirs along the Colorado River will reach critical low points by 2020, leading to water shortages throughout much of the western U.S.

“We need to get ahead of this,” said Kelissa Hieber, owner and head brewer at Denver’s Goldspot Brewing. “We are getting to a point where we could have a crisis that could be catastrophic for small breweries.”

Hieber was speaking from behind a keg at her brewery’s stand at the Save the Ales Festival in downtown Denver in August. Hers was one of more than 40 local breweries that donated beer to the festival to raise money for water conservation initiatives throughout the state. Like most of the 200-some other craft breweries in Colorado, Goldspot uses city water to produce its beer. If a water crisis were to strike, these breweries would be subject to the same restrictions as any of the city’s other commercial water users.

Most of Colorado’s cities have yet to face serious water restrictions, but the bleak forecasts have grabbed the attention of leaders in the state’s booming beer industry. “Even though it takes 10 times the amount of water to make a hamburger than to make a beer, people look at the beer and they see the water, so they have a relationship with it,” said Katie Wallace, the director of corporate social responsibility at New Belgium Brewing in Fort Collins. “I think that gives us a greater responsibility and a greater opportunity to talk about water.”

Wallace refers to Colorado’s rivers as the brewery’s “lifeblood,” a sentiment shared by many other brewers in the state—and a driving force behind a groundswell of water advocacy from the industry. Craft breweries all over Colorado are now championing initiatives to restore rivers and preserve the state’s valuable water resources. New Belgium, for instance, donates to organizations that help protect its watershed and keep water in the river.

Concern over water shortages has pushed many brewers to find ways to save water in their own brewing process. Though municipal water restrictions are likely a long way off, drought and climate change present other risks to the state’s beer. Recent droughts have decreased barley and hops harvests—driving up costs for breweries—while wildfires have spread across the region, contaminating some surface water sources.

In 2012, Fort Collins lost half of its yearly water supply when the largest wildfire in Colorado history contaminated the Poudre River, forcing the City of Fort Collins to drain its reservoirs to meet water demand. The fire was just seven miles from New Belgium’s brewery, and for years, the brewery employed a sensory panel to taste-test the water for smokiness before putting it into their beer.

“People are a little bit surprised at the degree to which climate change is already a problem for something like brewing,” said Dan Carreno, one of the founders of Colorado’s Save the Beer Tour, which educates beer drinkers on the effect climate change has on the brewing process. “This problem is happening now. It’s not happening 20 or 30 years from now.”

The issue of water quality is particularly sensitive in Colorado, where the supply of mineral-rich Rocky Mountain water was the catalyst for what has become a strong brewing tradition in the state. The tasty water first attracted Adolph Coors to Golden, Colorado, in 1873, when he set up the original Coors Brewery right on the river. The brewery has since grown to become one of the largest in the world, producing up to 10 million barrels a day.

Unlike small craft breweries, Coors has insulated itself to the risk of city water shortages by purchasing legal water rights to draw directly from a river, and the company is able to replicate the taste and mineral content of the water at its Colorado brewery in its outposts throughout the country.

Most craft breweries tweak a water’s flavor profile before using it in their beer, but only a little, since the process is energy-intensive and expensive. So they place a high value on the quality of the original water coming through their pipes.

“It’s a lot to do with the brewers respecting the water and wanting to have high-quality water in their product,” said Greg Schlichting, the head brewer at Denver’s Declaration Brewing Company. “It’s the same thing when they source malt and source hops and they source everything.”

High-quality ingredients are the staples of any craft brewery, but so is innovation, and brewers can improvise when resources aren’t available. In April, Declaration brewed a beer for a special event using only water they recycled in-house. Although the beer was costlier to produce, the water quality after treatment was nearly identical to their other beers. However, not all breweries have the resources to resort to these measures when strapped for water, especially very small ones.

Recycled water could be an option in an extreme situation, but Declaration’s brewers don’t think it will get to that point. Besides, even in a beer mecca like Fort Collins, craft brewing uses only about 2 percent of the city’s water, while lawn care accounts for nearly 50 percent.

A Visit to the Forgotten Apartment in Manhattan's Fort Washington Library

Dwellings like these were originally designed for workers and their families.
climate changebeerwater

Villagers are using natural wooden barriers to try to restore the mangrove forests and save their lands and homes.
geology

An abstract view of a changing world.
nature

The Gribbles Are Here to Help Us Go Green

Tiny marine wood-eaters might help us dig into our biofuel future.
Video • PinDrop

One man's love for East Coast diner culture brought an entire eatery all the way from New Jersey to Colorado.
Denver, Colorado

Neal Cassady may still have an open tab at one of Denver's oldest watering holes.
Denver, Colorado

This Boeing KC-97 tanker is now a restaurant for aviation lovers.
Lakewood, Colorado

At this Denver landmark, the meals are compulsory, the sopapillas are complimentary, and the insanity is everywhere.
Want to see fewer ads? Become a Member.
Related

Conservationists were baffled when hundreds of elephants died in the Okavango Delta this summer.
Read more
Thanks for sharing!