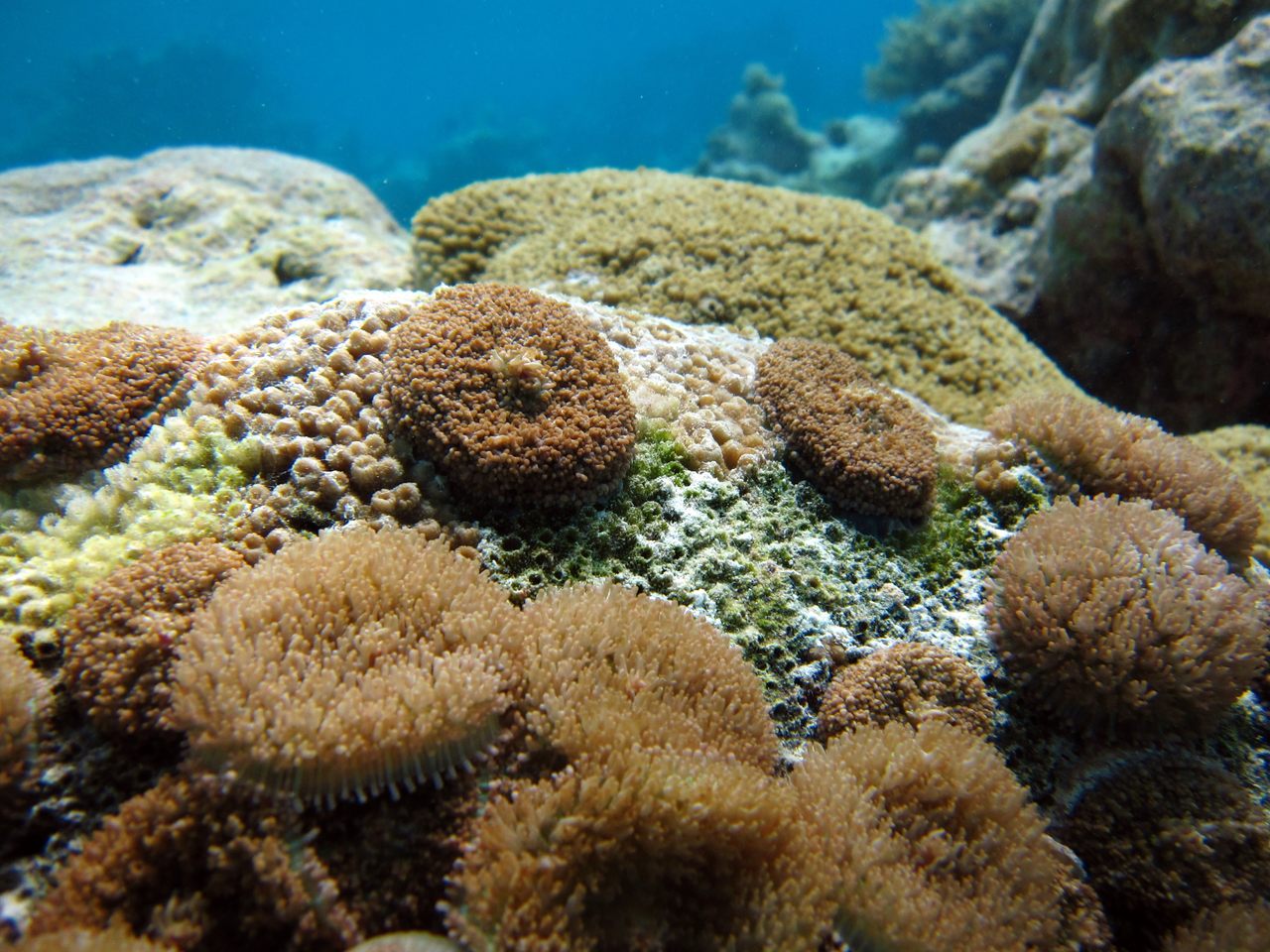 Corallimorphs on a hard coral in the Palmyra Atoll. Danielle Cantrell, U.S. Fish and Wildlife Service

The Palmyra Atoll is about 1,060 miles south of the Hawaiian archipelago in the equatorial Pacific. Far from any permanent human disturbance, it is a haven for an astonishingly diverse spectrum of species, but for the past couple decades, the reefs have been overrun by creatures we know very little about: corallimorphs.

Corallimorphs are cnidarians, like hard corals, sea anemones, and jellyfish. They’re closely related to corals, except without the hard parts, and in Palmyra they’ve been outcompeting and even actively killing their cousins—smothering them like a blanket and throwing reef habitats out of balance. But unlike other reef threats, such as invasive lionfish or algal blooms, not much is known about corallimorphs. Marine scientists have had a difficult time coming up with the best management strategies for the creatures—largely because they don’t know whether they’re native to the area or what might be giving them a competitive edge.

For a new study in Coral Reefs, marine biologists took a genetic approach, and sampled the DNA of corallimorphs around the atoll, which is managed as a National Wildlife Refuge by the U.S. Fish and Wildlife Service. They found that all the corallimorphs belong to just a single species. While this is progress, it isn’t enough to unravel the nature of the plague afflicting the reef.

“There’s a lot of confusion in corallimorph taxonomy,” says Kaitlyn Jacobs, a marine biologist who completed the research while at the University of Hawaiʻi at Mānoa. So little work has been done on them and they can look so different that scientists aren’t even sure how many documented varieties are actually separate species. “It’s very frustrating,” she adds. “They really fly under the radar.”

Marine scientists and conservationists think that something happened to unbalance Palmyra in 1991, when the fishing vessel Hui Feng I was intentionally grounded on the reefs, for reasons unknown. In the following years, the march of the corallimorphs began. By 2005, it was clear that corallimorph overgrowth was a problem, and though the shipwreck was removed in 2013, Palmyra is still grappling with their outsized presence today.

Could the grounded ship have brought the corallimorphs in, or did it somehow disturb the ecosystem in a way that gave them a leg up? If the genetic analysis had shown there is more than one species present, it would have suggested an invasion from the outside. “It definitely would have showed us that the corallimorphs were brought in with either the shipwreck or some sort of ship traffic,” Jacobs says. The presence of just a single species leaves the question unanswered.

“Coral reefs are important because they’re calcifying, and the three-dimensional nature of their structure is one of their most important features. It provides all the little cracks and crevices for the organisms, it attracts fish, and it builds shorelines and protects shorelines from waves,” says Michael Fox, a marine ecologist at Woods Hole Oceanographic Institution who has studied corals around the world, including at the Palmyra Atoll. And while corallimorphs can and do live on coral reefs in normal numbers, Fox says that what’s happening on Palmyra is unstable. “When you cover all that [coral] with the corallimorph, the system starts eroding and collapsing.”

The management strategy, Fox adds, depends on the open question of whether the corallimorphs are invasive. “If it truly doesn’t belong there, and it’s taken over, we need to get rid of every single corallimorph and eradicate it from the system,” he says. But if it is indeed native to the reef, then a more nuanced approach is needed, such as winnowing populations in a way similar to culling deer.

While Fox concedes that it’s not impossible for the Palmyra corallimorphs to be native, he says that “they’re acting like an invasive species,” and the fact that other atoll inhabitants are unable to control the aggressors through predation or other defenses, “speaks more toward it being new.”

Jacobs’s hunch is that the corallimorphs were actually brought in well before the 1991 wreck, sometime during World War II, when there was a lot of ship traffic in remote parts of the Pacific. Analysis showed that the critters are almost genetically identical to a species native to Okinawa, Japan. “I think that it was brought in sometime that way and naturalized,” she says, “and then it just took off when that boat was grounded.”

An early theory was that Hui Feng I pushed excess iron into the water, which the corallimorphs were somehow able to utilize more effectively than other organisms. But recent work appears to refute that theory. Jacobs thinks the creatures are simply scrappy, resourceful, opportunistic organisms that are quick to recover from disruptions. “What really does it is how good they are at surviving overall,” she says. “They reproduce really quickly, both sexually and asexually … they have a really wide diet … they’re just really easy.”

Jacobs says that since Palmyra is so lush that “there’s no danger of the corals being completely taken over or completely going away.” But not everywhere has such a healthy coral presence.

Fox has seen similar corallimorph takeovers elsewhere, such as in the Maldives. After part of a reef was dredged to create a harbor, corallimorphs quickly swarmed the whole area. Getting to the bottom of the Palmyra issue, he says, could be a valuable precedent for other places.

“It’s clear we need to know more, because Palmyra is not the only place where corallimorphs have dominated some disturbed habitat,” Fox says. “We have an opportunity to learn from Palmyra and to develop strategies and the information necessary to address this problem in more places.”

To Jacobs, the next step is clear: “What’s next is for taxonomists to really go into the genetics and the morphologies and really do a deep dive” to figure out the different species and distributions for corallimorphs. Developing that foundational knowledge is just the first step.

A researcher says her award-winning image of a swirling school of fish is also a metaphor for the oceans' health.
Video