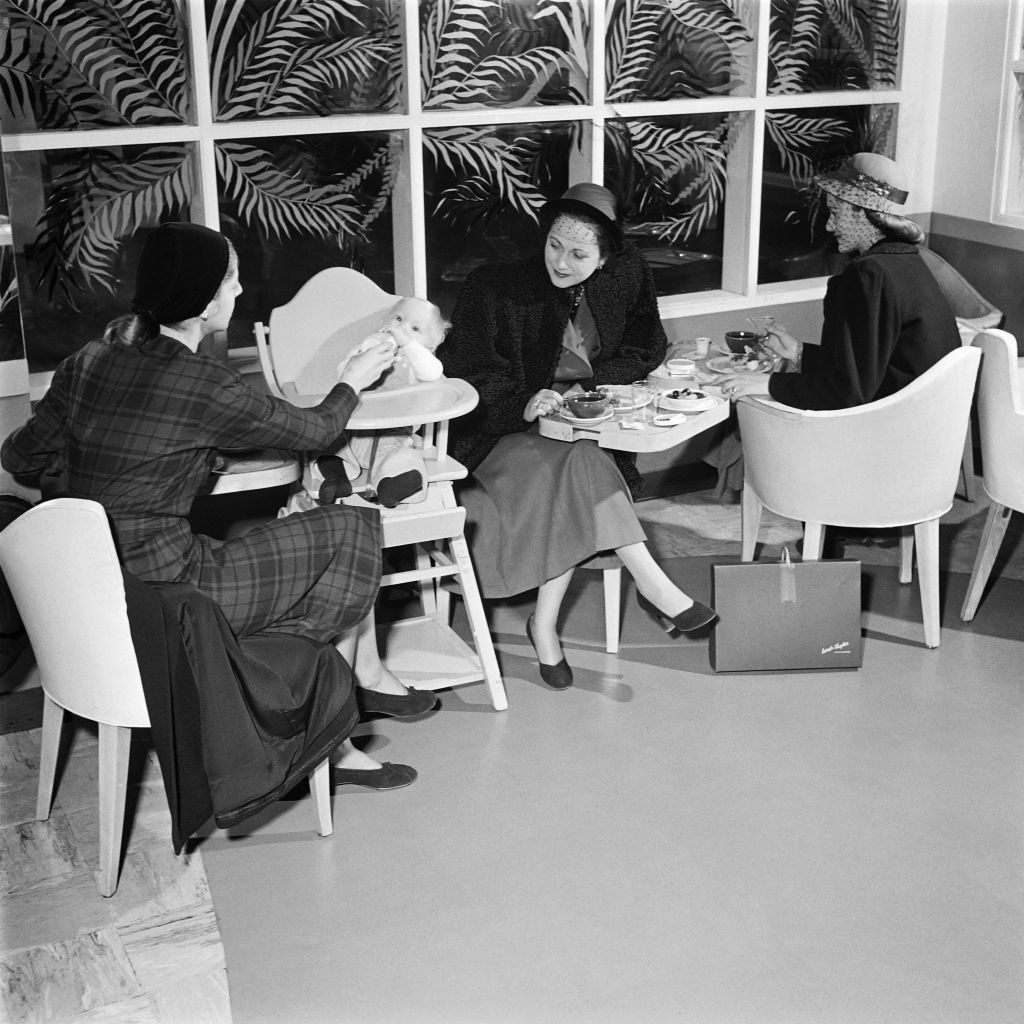 Three women and one baby enjoy lunch at the Lord and Taylor tea room. Tim Boyle/Getty Images
In This Story
Destination Guide

THIS ARTICLE IS ADAPTED FROM THE JUNE 18, 2022, EDITION OF GASTRO OBSCURA’S FAVORITE THINGS NEWSLETTER. YOU CAN SIGN UP HERE.

On my first trip to Chicago, the only thing my mother wanted was to visit the Macy’s on State Street. The whole store was grimy and Recession-gnawed. But we were there for a reason: Frango Mints.

Once a calling-card of Marshall Field’s, the department store chain that ruled Chicago with a perfumed fist, Frango Mints are just one example of how department-store food once entranced the American shopper.

What regional stores such as Filene’s, Wanamaker’s, Frederick & Nelson, Hutzler’s, and J. L. Hudson’s all had in common, besides perfume counters and dressing rooms, were elegant restaurants.

Our cultural need for speed wiped most of these stores, and their restaurants, off the map. But many of their greatest specialties have endured.

Au Bonheur Des Dames is the title of an Émile Zola novel about department stores, and it also sums up much of their appeal: The Ladies’ Paradise. For white, middle- and upper-class American women, the imported French concept of the department store was a step into both physical and financial freedom.

Women could shop, socialize, watch fashion shows, write to their friends on store letterhead, and, of course, dine, all within the stores. And by dine, I don’t mean plastic-wrapped sandwiches and styrofoam-cup coffee.

Wanamaker’s Crystal Tea Room in Philadelphia, when it opened in 1911, advertised itself as “a delightful place of rendezvous, recreation, and refreshment.” That meant not only tea, but tea sandwiches, sweet and savory pies, salad-stuffed tomatoes, and elaborate desserts: foods that appealed to the mostly-female clientele and kept them in the stores to shop longer.

Menus often extolled the homey, familiar qualities of their dishes and their in-house bakeries and confectionaries. But many department-store restaurants also served up cosmopolitan thrills in the form of exotic fruits and continental-sounding recipes (sometimes combined, as in the case of the Neiman Marcus mandarin orange soufflé).

For generations, department-store restaurants were the toast of the town, drawing a clientele well beyond the targeted ladies-who-lunched. My mother, who never had the money to eat at these ritzy venues during the department-store heyday, still thinks fondly about those green boxes of Frango Mints. “They made me feel like I was in on an elegant secret,” she says.

Recipes abound online for department-store specialties of yesteryear. Often, people track down instructions from old newspapers, cookbooks, and even the aging chefs of long-gone restaurants. The following foods—a candy, a pie, and a chicken salad—together represent some of the most classic department-store delicacies.

“From our famous daylight kitchens … the treat of treats!” boasted a 1947 Marshall Field’s ad. Frango Mints, extolled as “a creamy chocolate mousse flavored with mountain-cool peppermint” covered in “a thick coating of rich milk chocolate,” have long been a calling card of Chicago.

But Frango Mints got their start far from the Windy City. How a Seattle frozen dessert became a Chicagoan signature candy is a long story, but for decades, the seventh floor of the State Street store in Chicago turned out the sweets by the million.

When Marshall Field began producing the candy out of state in 1999, the Chicago Tribune recorded that the “xenophobic outrage was all-consuming.” That does a lot to explain why Macy’s, which took over Marshall Field’s in 2006, still meekly produces the beloved candy.

Recipe: There’s no need to make your own Frango Mints. You can buy them on the Macy’s website. But there are a number of treats that call for them, such as the classic Frango Mint pie.

“The ladies who lunch are shedding serious tears. Never again will they taste that heavenly Coconut Cream Pie, as soft and rounded as a cumulus cloud, as white as a snowdrift,” lamented the Los Angeles Times in 1993. “Gone are the Monte Cristo sandwiches, the Bombay salad with honey-sweet Poppy-Seed Dressing, the Bread Pudding, the scones and tea, the discreet martinis.”

The Bullocks Wilshire flagship, an Art Deco masterpiece on Wilshire Boulevard in Los Angeles, once bustled with shoppers and diners. Their Bullock’s Tea Room had a special place in the hearts of Angelenos, whose longing for that coconut cream pie still lingers, nearly 30 years after the Tea Room’s closure.

Recipe: Recipes abound for this special pie. The filling takes an improbable two hours to boil down, but “if you don’t do this, you’ll have soup, not pie filling,” warns the Times.

During the heyday of department-store dining, fresh fruit was still a luxury. Savvy restaurateurs lured guests with exotic and out-of-season treats, such as fresh strawberries flown in from New Zealand at ludicrous expense. Other restaurants relied on canned fruits, but gussied them up with every mid-century condiment available (usually mayonnaise).

Often, though, that fruit ended up in a salad. That could mean anything from a fruit-filled Waldorf to an elegant strawberry garnish, but just as often the fruit was blended into chicken salad.

At Rich’s Department Store in Atlanta, their Magnolia Room’s specialty was chicken amandine with frozen fruit salad. The chicken is standard enough, but the side salad was something else: several kinds of canned fruit, bound together with mayonnaise, powdered sugar, and cream cheese, embellished with marshmallows and food coloring, then frozen.

Recipe: You won’t find this unique combination on a restaurant menu anymore, but here’s a recipe to make it, if you dare.

Department-store cuisine is by no means dead. Many a Nordstrom’s and Macy’s offer basic meals. For the luxury of yesteryear, though, you’ll have to seek out the following restaurants.

This one is a two-fer: Marshall Field was known for their chicken pot pie, supposedly created by a saleswoman and sold at the store since 1890. But that’s not the only pie on the menu at the Walnut Room, the restaurant inside the former State Street Marshall Field’s. There’s also Frango Pie, made with the iconic mint candy.

Neiman Marcus got its start in Dallas, and their circa-1953 Zodiac Room restaurant offers a crash course in department-store cuisine—pot pie, popovers, and pot roast are all on the menu, along with their specialty, Mandarin Orange Soufflé.

When L.S. Ayres closed its tea room in 1990, indignant fans of the fading department store staged a protest. But a smaller but faithful replica opened in 2002 at the Indiana State Museum. Open only for the winter holidays, the Tea Room serves the specialties of yesteryear, including the famous chicken velvet soup.

It's where legends like Tina Turner and Ray Charles launched their careers.
art

A local pineapple cannery once dumped pineapple trimmings off of this pier, with sometimes smelly results.
Spearfish, South Dakota

Grapes be damned, this distillery makes wine from apples, blueberries, cranberries, and more.
Sponsored by The Maine Office of Tourism
West, Texas

Some of the best pastries in "the Czech heritage capital of Texas" come from a gas station off I-35.
Los Angeles, California

Sit at the "Disney table,” where Walt and his team of "imagineers" once dined on the regular.
Want to see fewer ads? Become a Member.
From Around the Web
THE GASTRO OBSCURA BOOK
Taste the World!
An eye-opening journey through the history, culture, and places of the culinary world. Order Now