Meet the Woman Who Trekked a 1,200-Mile Ice Age Trail in the Dead of Winter - Atlas Obscura
Want to see fewer ads? Become a Member. 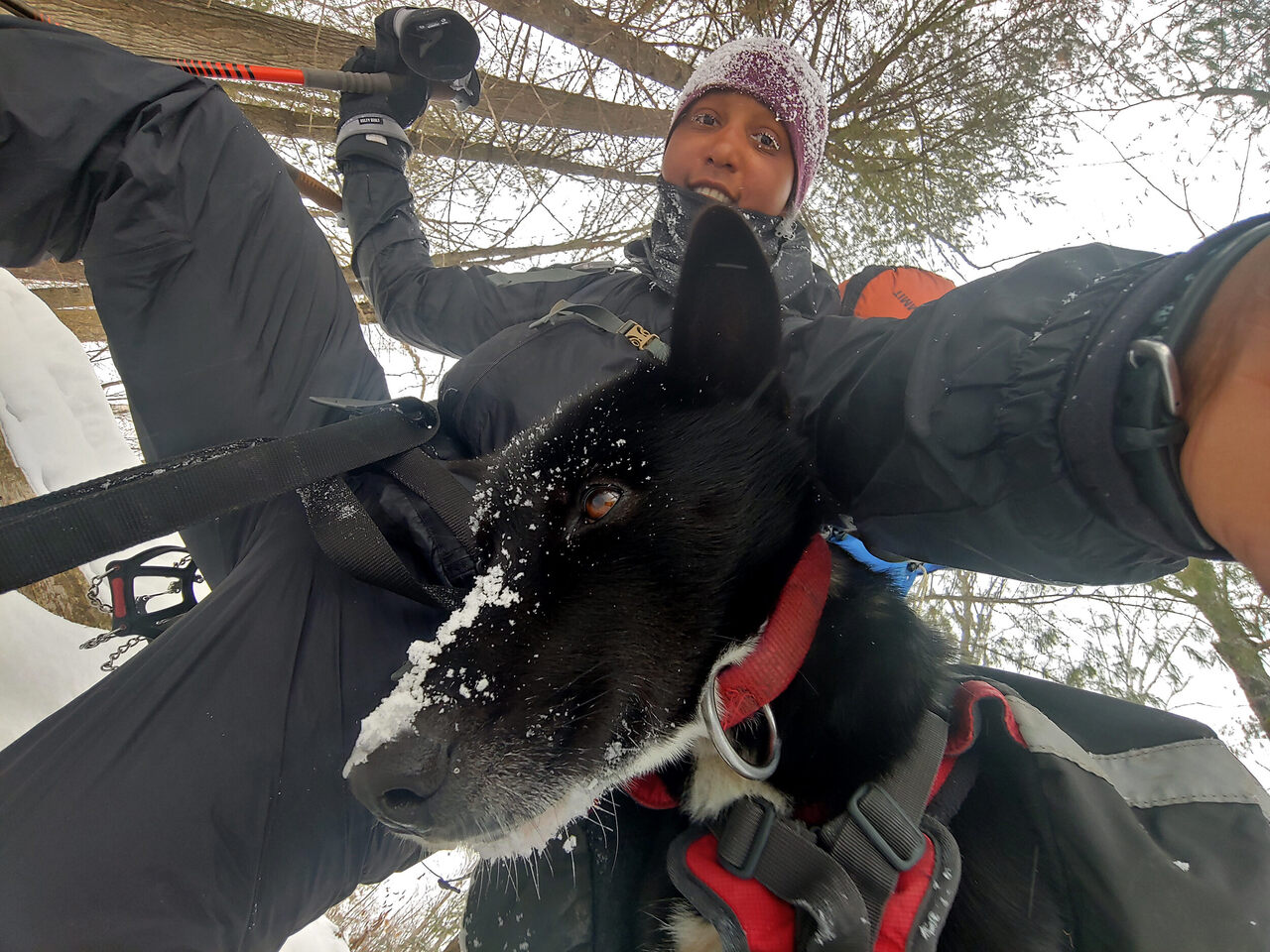 Emily Ford (with Diggins) on the trail. Courtesy Emily Ford
In This Story
Place

This posh mansion began as a family's estate and ended as the site of a murder ripped from the pages of a pulp novel.
Destination Guide

In the depths of a Wisconsin winter, a few days before the end of 2020, Emily Ford went backpacking. Nearly 1,200 miles of snowy trail stretched before her when she set off from Potawatomi State Park in Sturgeon Bay, on the edge of Lake Michigan. Accompanied only by Diggins—a friend’s sled dog, borrowed for the expedition—Ford planned to tackle the Ice Age National Scenic Trail. If she finished, she would be only the second documented person to complete the trail in winter, and the first woman and first person of color.

Following what was once the southern edge of glacial advance into North America, the Ice Age Trail cuts a rough Z across Wisconsin. It crosses bogs and hummocks—hilly terrain sculpted by ancient ice moving across the landscape—and skirts jumbled towers of rock the glaciers left behind. Day-hiking a stretch of it in summer is a popular, low-intensity activity. In winter, however, storms can dump a few feet of snow in a day. Temperatures stay below freezing for weeks, sometimes dipping to -40 degrees Fahrenheit.

For most of the year, Ford, 28, is busy as head gardener at the Glensheen Historic Estate in Duluth, Minnesota. But when the Upper Midwest’s green season ends, she hits the region’s frozen trails. Despite being a seasoned winter hiker, Ford had no idea what awaited her and Diggins on that late December day.

After she crossed the finish line nearly 70 days later, Atlas Obscura spoke with Ford about hiking through the middle of a controversial wolf hunt, feeling her place on “the predatory food chain,” and becoming an influencer with a simple message: “Everyone deserves to be outside.”

While you were on the trail, your Instagram account (@emilyontrail) blew up. How do you feel about being portrayed as a role model?

I just like backpacking. I like being outside, I have a social media platform, so I post about it. If the response is that people feel like they can do it, too—and I believe that anyone can do it, and I believe that everyone deserves to be outside—if that sparks something for somebody else, that’s great. That’s fantastic. Really, my hope for people is that they get to experience the outside, especially people of color. All these people of color have different experiences with the outdoors and, unfortunately, in the United States, with our ancestors, they’re not great. All of those feelings and all of those fears kind of trickle down through generations. So I’m hoping it shifts back to, actually, your ancestors didn’t have to hide inside. They weren’t called “inner city folk.” They were just a tribe, or a clan, or a nation. You totally belong outside. And I think, once you get a platform, there’s kind of that urge to keep speaking. I’m okay with that. I think it’s pretty cool, actually. This is how a lot of things in my life develop. I’m doing something that I like and it develops into something bigger. The way I got my job is because I love gardening, very much, and I showed that in my interview and then I got hired, and now I’m the head gardener at Glensheen.

I don’t like to just sit outside. I like to do outside. I love digging in the dirt, getting my hands dirty and being part of the Earth. That’s really what I love. So, with thru-hiking, especially on those long trips, you really become more like part of the system outside.

Was there a moment that stands out for you from the Ice Age Trail?

Toward the end, we were following this beautiful, meandering river. On the map it looked like maybe there was a flat area, down by the river. And I was like, “That’s where we’re going to stay tonight.” This was like day 67, day 68, maybe. I didn’t have to boil any snow that night and it was fantastic. We’re down in the ravine, the perfect sound of rushing water, the coyotes are howling, the owls are hooting, and that’s what I love about backpacking. When I talk about wanting people to experience the outdoors, and I hope that people will feel comfortable in the outdoors, I understand that not everybody has the capacity to get away for that long. Some people are single parents, some people have to work all the time. But I hope that, in whatever capacity they can get outside, they have a similar feeling.

Did you have any close encounters with wildlife?

One night, we were hiking into the night, and it was dark and we were in the Chequamegon Forest. Diggins’s ears [perked up]. Something was out in the woods, and I’m assuming it’s a predator of some sort. Here’s the thing about predators: They don’t always attack, but they’re really good at watching you, to see what you’re going to do. When you’re hiking into the night like that, and you know the predators are watching you, because they’re everywhere, that feeling is so humbling. I’m not scared. I’m just passing through. I’m not here to take their territory. I’m not here to harm them. I can’t talk to the animals, but sometimes I wonder, do they know that that’s my feeling when I walk through here? I wish I could Snow White this and have the animals pop out and chat with me. Once you’re so immersed in the wilderness, or not even the wilderness but the outdoors, you begin to realize your individual spot on the food chain, on the predatory food chain. You begin to realize that you don’t have sharp claws, you don’t have sharp teeth, and actually, you’re not that strong. Compared to a wild animal? You’re not that strong. I love that feeling.

Speaking of predators, you and Diggins were on the trail when the U.S. Fish and Wildlife Service removed the gray wolf from the federal endangered species list. Under pressure from hunting groups, Wisconsin hastily organized a wolf hunt in late February, including in the area where you were.

The way that wolf hunt came around is shady, number one. Shady business, Wisconsin, shady. Come on. A woman keeping me abreast of anything that I might encounter with Diggins [sent me an email] saying, hey, just to let you know, there’s a wolf hunt, and it’s planned for these days. And [I realized] it’s not just a wolf hunt with guns. It’s a wolf hunt with people using snow machines, it’s a wolf hunt with people using dogs. My biggest concern was Diggins. What if these dogs think Diggins is a wolf, or something happens and we are in wolf territory? If it comes down to that, am I willing to harm another canine to save Diggins? And I came to the conclusion, yes. I would do anything to keep her alive in that situation, because I think that using a canine to hunt another canine is immoral, a weird version of slavery. It’s like using people to hunt people. It’s not how our relationship with canines is supposed to work.

How did it feel when you and Diggins made it safely to the end of the trail on March 6?

It was bittersweet. I think this resonates with other thru-hikers: For so long, on the trail, you want it to be over, you just want to finish. Then when you finally get to the end, you’re like, wait a minute, I wasn’t ready to be done with this quite yet!

I have my sights on a couple things, but nothing is confirmed yet. I have a weird affinity toward trails that don’t get much recognition. I think I might just keep trying to find trails that people don’t do.

Emma Gatewood set out wearing sneakers, with a duffel slung over one shoulder.
nature

Are the Great Outdoors Off-Limits During a Pandemic?

"Obey the f***ing law and do what public health authorities tell you to do."
restaurants

Challenging patriarchy, one eatery at a time.
literature

How potboilers and pin-ups showed gay and bisexual women they were not alone.
Video • AO Docs