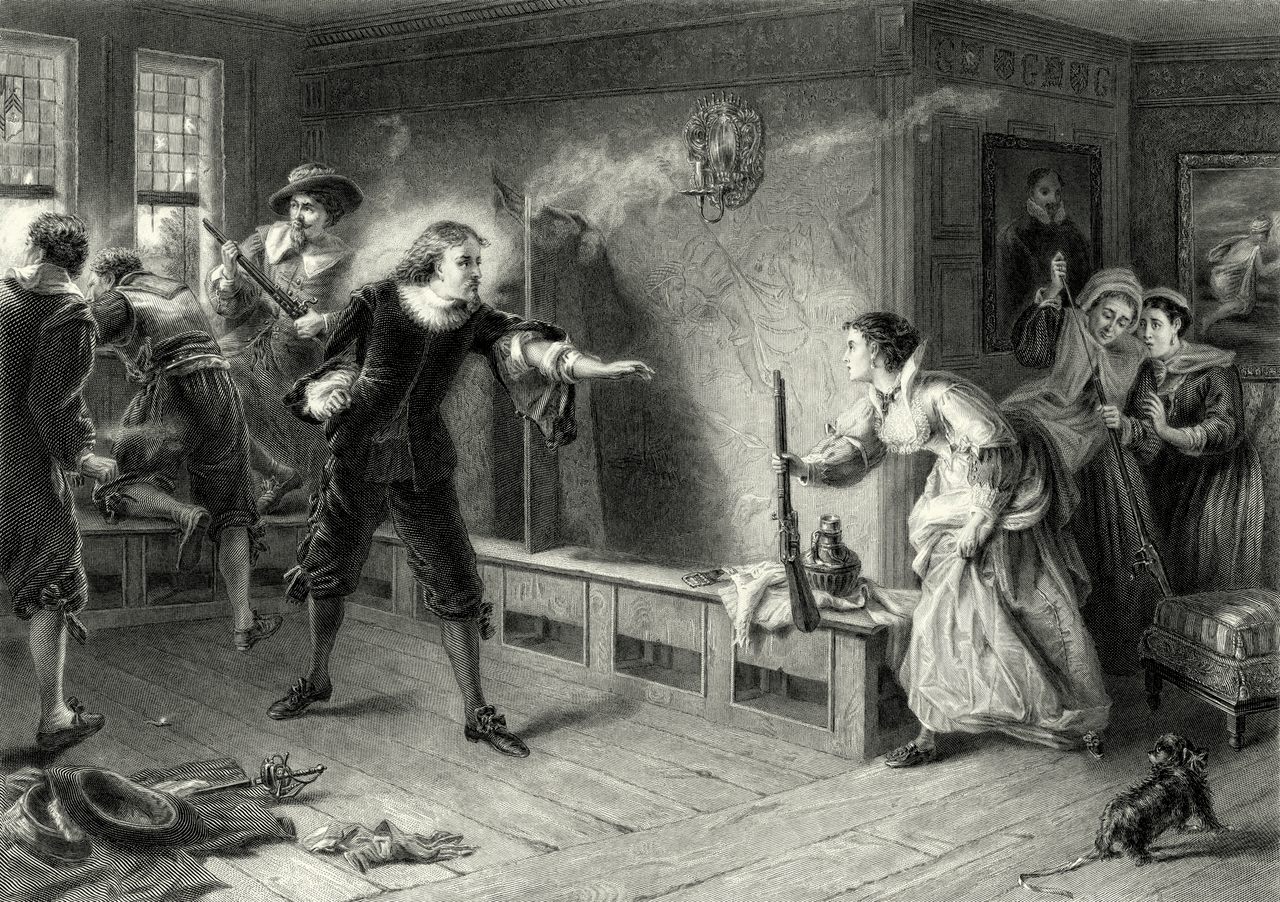 Vintage engraving of a scene from the English Civil War: Men shoot their muskets through a window while the women reload the guns. duncan1890/Getty Images
In This Story
Destination Guide

Pistols at the ready, Jane Ingilby sat in the hush of the castle’s library, careful not to drop her guard. All night she watched her captive: a cavalry commander of growing acclaim named Oliver Cromwell. “I imagine Cromwell, who had just won the greatest military victory of his career, was stunned to find himself effectively held prisoner by a woman,” says Sir Thomas Ingilby, the 27th generation of his family to live at Ripley Castle in Yorkshire, England. For centuries, his family has preserved the story of “Trooper Jane” and the events on the night of July 2, 1644.

Earlier that day on nearby Marston Moor, Cromwell had led a surprise attack, securing the Parliamentarians a decisive victory against the Royalist forces of King Charles I. It was a pivotal moment in the English Civil War. Cromwell and his troops pursued the Royalist forces, arriving in Ripley at nightfall. “It would have been a tense time in the village,” says Ingilby. “And it wouldn’t have been good news for everyone on the wrong side of the battlefield, or for those who were about to get their larders raided.” Musket ball scars, said to be from that night, can still be seen on the east wall of the village church and castle gatehouse.

Ingilby says that when Cromwell’s general came to the castle demanding lodgings for the soldiers, “Trooper Jane told him to take his rebel boss elsewhere.” A gutsy declaration that led to a compromise: Cromwell could stay in the castle while his troops billeted in the church. Jane was permitted to keep her pistols by claiming the need to protect her virtue. In reality, she was more concerned about safeguarding her brother William, hiding in the castle wall’s priest hole, a secret compartment designed to conceal Catholic priests during a time of persecution. Sir William had fought for the king earlier that day at Marston Moor. What Cromwell couldn’t have known is that, according to the Ingilby family’s oral history, the woman holding him at gunpoint in the library had also faced him on the battlefield.

No contemporary sources survive to corroborate the story of Trooper Jane donning breeches and armor to ride into battle for the king, or of her holding Cromwell—the country’s future ruler—prisoner. If true, pistol-toting Trooper Jane challenged not only Cromwell but the very idea of how women behaved in 17th-century England when, according to conventional histories, they had little agency.

However, those histories are incomplete, says Mark Stoyle, professor of early modern history at the University of Southampton. “Men were so much more likely to be literate; they’re the ones who have left records,” says Stoyle. “A lot of historians just weren’t interested in writing about women’s experiences. Of course, they were almost all male.” But, as historians reassess the English Civil War, it’s becoming clear that women were involved in almost all aspects of the conflict.

“If you go back to the 16th and 17th century,” says Stoyle, “almost any army on the move would have very large numbers of women with it.” He disputes the traditional view that women in the camps were either prostitutes or wives carrying out domestic chores for their soldiering husbands. “Women had all sorts of roles in the army,” says Stoyle. “They would be nurses and cooks, but they would also forage and bring back supplies.”

Stoyle notes there are several references to women, dressed as men, fighting in battle. For example, says Stoyle, The Scottish Dove reported in December 1645 that a Parliamentarian had been unmasked as a woman while buying petticoats in Evesham, despite claiming the garments were for a sister. Further investigation uncovered that she’d been fighting alongside three other women, “resolved to serve in the war for the cause of God,” according to the contemporary account. “What’s interesting about this case is the women were there to fight for a cause,” says Stoyle. While the fate of the women is unknown, some historical sources refer to other women who dressed as men during the conflict landing in prison.

A woman taking up arms would have been shocking to the norms of the era, unless it was in defense of her home, says Stoyle. It was such a situation that faced Lady Mary Bankes when her husband was called to join Charles I. Determined to protect her 13 children, Bankes moved her family to the most impenetrable of the family’s properties: Corfe Castle in Dorset, on the southern coast. “She was quite the matriarch,” says Pam White, part of a National Trust team researching new details of Lady Mary’s life.

Aware of the increasing likelihood of a siege, Bankes sent her sons away to safety and began hoarding supplies long before 600 Parliamentarian troops arrived at Corfe in June 1643. A siege ensued. While Corfe’s small garrison of soldiers defended another part of the castle, Bankes rallied her daughters and maids, and the group of women defended the inner bailey against troops scaling the walls. “They threw rocks and hot embers over the wall onto the soldiers,” says White, adding that 100 Parliamentarian troops were killed or injured during the siege. The castle’s inhabitants suffered only two casualties.

Nadine Akkerman, literary historian at Leiden University, says that women were also involved in the war in more covert ways. “The men are on the battlefields, they have fled to the continent, or they are in prison,” says Akkerman. “This is a moment where women take the initiative.” While researching Invisible Agents: Women and Espionage in Seventeenth-Century Britain, Akkerman discovered evidence of scores of women agents. That their histories remained hidden for so long suggests the women’s aptitude for espionage; it also makes Akkerman suspect there were more.

Women were effective spies partly because they were below, rather than beyond, suspicion. “It was believed that women were physically incapable of having political thoughts,” says Akkerman. Spymasters on both sides exploited that stereotype by using women intelligencers to write and pass coded letters, sometimes smuggled within raw eggs or written in artichoke ink. However, by the start of the Restoration in 1660, with England again a monarchy and the upheaval of the wars fading, Akkerman says the number of women agents shrank.

The end of the war appears to mark a return to the status quo for women, including those who had fought and spied, but Stoyle believes women’s roles during the English Civil War may have helped shift societal attitudes towards women, at least a notch. “I think it sets some seeds in the wind that never really disappear,” he says.

As for Trooper Jane, she did not live to see the return of the monarchy she had fought to save. She spent her final years working on a nearby farm, possibly to help pay off Parliament-imposed fines on her Royalist family. She died of unknown causes and was buried at Ripley on December 20, 1651. She was 50 years old. “The Civil War undoubtedly hurt,” says Ingilby, reflecting on the courage he believes Jane showed while helping her brother avoid capture and execution. Says Ingilby: “Of all the virtues you can be born with, the virtue of survivability is worth a hell of a lot.”

A new book tells the tales of the queens of Jerusalem.
women

Women who practiced kalaripayattu were a thing of the past—until Meenakshi Amma.
medical museums

How the country's Indigenous communities are keeping the memory of activist Dolores Cacuango alive.
List