The Job That Will Let You Do Whatever You Want in a Swedish Train Station, Forever - Atlas Obscura
Want to see fewer ads? Become a Member. 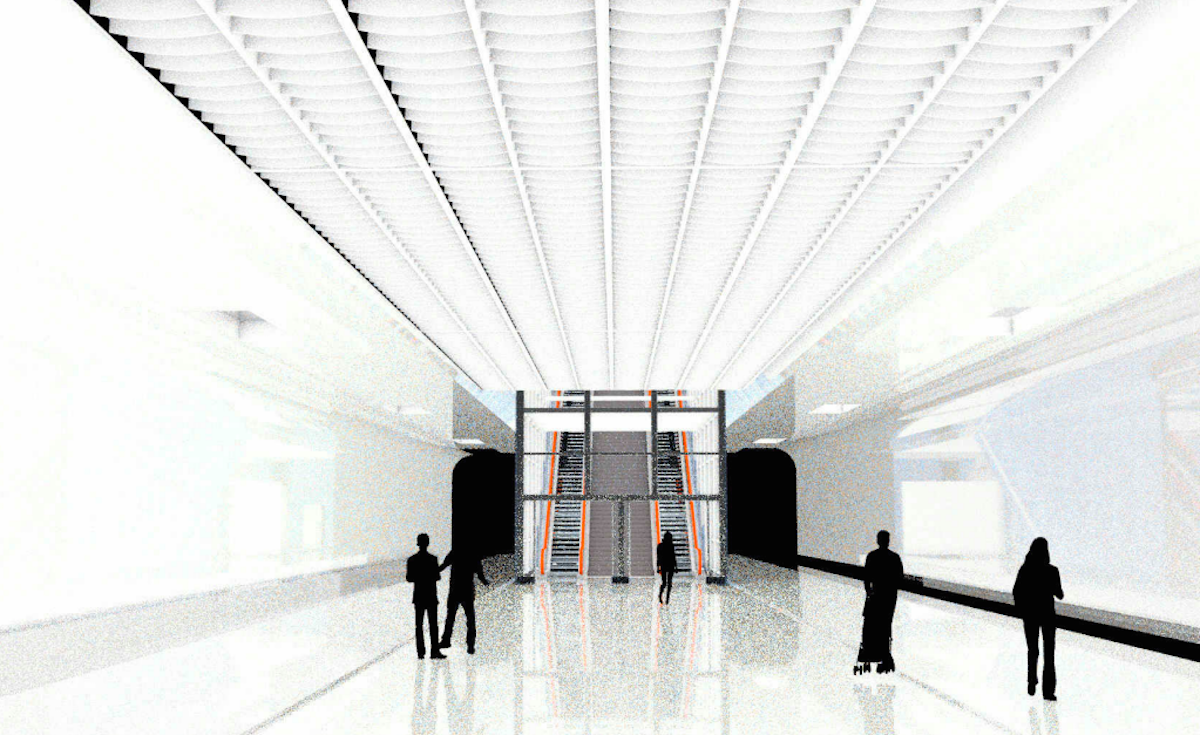 In this concept illustration, the presence of the eternal employee will flood Korsvägen station with light. Visualization: Anna Heymowska
In This Story
Destination Guide

In 2025, applications will be accepted for the job of a lifetime—literally. A fair starting salary, with annual wage increases that match those for Swedish government workers, vacation time, even a pension, and the job is yours for as long as you do it. So what’s the job? Anything you want.

Each morning, the chosen employee will punch a clock in Korsvägen train station, currently under construction in Gothenburg, Sweden, which will turn on a bank of bright fluorescent lights. Other than that, “the position holds no duties or responsibilities besides the fact that the work should be carried out at Korsvägen. Whatever the employee chooses to do constitutes the work,” reads the job description. The employee can also choose how publicly visible or anonymous they would like to be while on the clock.

Eternal Employment is the brainchild of Swedish artistic duo Simon Goldin and Jakob Senneby, who often spin real-world economics into giddy, strange new forms. For this project they are investing a prize from from Public Art Agency Sweden in conjunction with the Swedish Transport Administration—about $650,000. This forms the Eternal Employment foundation, which will grow the initial sum and form a board to select and pay the forever employee. Anyone in the world can apply, and “the foundation will be an equal opportunity employer,” Goldin and Senneby say over email. And when the employee retires or chooses to leave, the board will select another.

Korsvägen is one of three new underground stations being constructed to alleviate traffic pressure and create jobs in Gothenburg. Already Sweden’s second-largest city, its population is to projected to grow by at least 150,000 by 2035. Goldin and Senneby hope that the job will make the station more than a stopover between one place and another. Eternal Employment is also a response to the way Gothenburg is changing. The home of Volvo, it was once a major industrial and shipping center. In recent decades, it has developed into an arts and entertainment hub, boasting museums, concert venues, and a super-sized shrimp sandwich supposedly inspired by American portion sizes. As Gothenburg’s working class finds itself marginalized, Goldin and Senneby see a job that gives total control to the worker as an act of economic imagination.

A mock-up of the job description, composed by Lina Ekdahl, a Gothenburg-based poet, concludes: “We can’t take it anymore. Apply. Take over. Thank you.” The official application isn’t actually up yet, but will be posted a few months before the inauguration of Korsvägen station in 2026.

In this world, as you might expect, an “eternity” isn’t really forever. It is actually about 120 years. “That was the time span for which the station is planned on a physical/architectural scale,” the artists explain over email. Goldin and Senneby hope that, even when this particular version of eternity is over, the position will leave a lasting impression. While they don’t see this kind of undefined job as a vision of the future, they imagine a “point of reference for the future.” Working “as though you were at Korsvägen” might become the stuff of urban legend, they propose, an idiomatic expression in praise of idleness. As for what that means exactly? Who knows, you may get the chance to answer that question yourself.

Look at Everything Beneath Europe’s Clouds

When the infamously cloudy continent got a February reprieve, satellites got a clear view.
jobstrainstransportationart

Omsk was promised a Metro system in 1979. Forty years later, locals salute a subway that never saw the light of day.
food

Ekiben offers a taste of the country's regional delicacies.
infrastructure

He has spent 40 years chronicling overlooked mosaics, plaques, and other decorations. Only 362 stations to go.
Read more
Thanks for sharing!