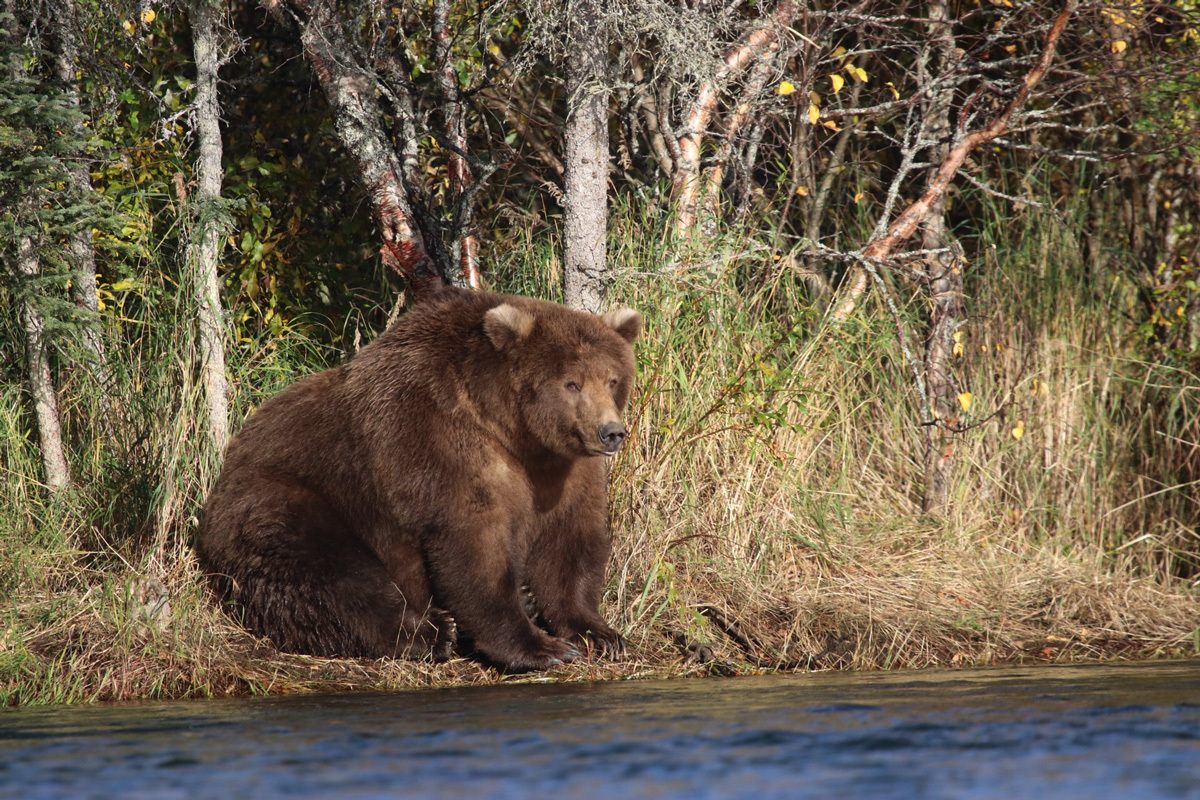 (Update! It’s been 10 years since Alaska’s Katmai National Park and Preserve, in partnership with Explore.org, first switched on live bearcams along the Brooks River to share the park’s most famous residents with a global audience.

For many viewers, after a summer of salmon-catching, bruising brawls, and rather perfunctory courtship, autumn’s highlight is voting in Fat Bear Week. The online contest to crown the most pleasingly plump of the area’s brown bears is not just a popularity contest: The fatter the bear, the better its chances of surviving the long, lean months of an Alaskan winter, nestled snugly in its den.

Last year, Fat Bear Week winner 480 Otis ambled to victory thanks partly to the sentimental vote: The elderly bear, in his late 20s and missing several teeth—and often falling asleep right in the river—appeared late in the 2021 season, looking frail, and had fans fearing the worst. But Otis rallied, and ate his way to his fourth title, the most wins ever for any Brooks bear.

Otis is back (looking positively paunchy) to take on all challengers for Fat Bear Week 2022, which has an expanded format this year. Events kick off on Sept. 28 with a live chat and preview of the Fat Bear Jr. competition (vote for the chubby cubbies Sept. 29-30). Voting for the adult heavyweight division runs Oct. 5-11. Competition brackets, a voting FAQ, and a full list of events will roll out on the official Fat Bear Week 2022 site.)

While the fan-favorite Fat Bear Week competition is all in fun, there is serious science happening behind the scenes. Read on to learn how biologists are testing innovative ways of figuring out just how big these big-deal bears actually get in a piece originally published in 2021 in High Country News. It appears here as part of our Climate Desk collaboration.

Brown bears are fattening up for winter hibernation in Alaska’s Katmai National Park and Preserve. Thousands of viewers from around the world will tune in for Fat Bear Week to watch the bears gobble fish from the Brooks River, estimate how well they’re packing on the pounds, and then vote for the portliest in a single elimination bracket.

But just how fat are those fat bears? A winner will be crowned Oct. 5, but webcam viewers—almost 650,000 cast votes last year—and actual visitors—15,000 came to Brooks Falls to see the bears in 2019—are just guesstimating. But there’s hope for achieving greater accuracy: GIS specialist Joel Cusick is pioneering a new technique for calculating the bears’ weight that has broader implications for noninvasive wildlife research.

The idea came to Cusick, who works for the National Park Service in Alaska, in 2018, while he was working on mapping and surveying at Katmai. A terrestrial lidar scanner, which uses lasers to determine distance and other measurements, was on hand to measure buildings. That’s the device traditional civil engineers use, but when Cusick wandered down to Brooks Falls and stood on a viewing platform 300 feet away from the bears, inspiration hit. He thought: Why not use the scanner to measure a bear’s surface volume instead?

“I got a laser return from the butt of Otis, one of the more famous brown bears up there,” Cusick said. “I thought, ‘Wow, this just might work.’”

Lidar, which stands for “light detection and ranging,” emits beams of light to measure three-dimensional objects or areas. When light waves hit an object, they bounce off and return to the sensor. Computers then use the speed of light to calculate the distance between the sensor and all the points. That figure is then processed using software that can model a three-dimensional object. Scanners have become standard technology that is deployed from the ground, the sky, and satellites to measure vegetation growth. Now, they’re being used to measure bears’ length, height and girth.

And bears like Otis, a legendary past champion of Fat Bear Week, are actually a pretty good fit for lidar scanning. Bears in Katmai are generally weighed in the spring, when they’re lighter, using a pulley system. The process is resource-intensive, however; it usually involves a helicopter and requires tranquilizing the bear. The 4.1 million acre park in southwestern Alaska (home to more than 2,000 bears) is already remote and mostly accessible only by plane. “In the fall, it’s always been a great mystery how heavy these bears get, because they just can’t weigh them,” Cusick said.

The devices only need from 3 to 11 seconds to pass over the animal; since the bears are currently preoccupied—fishing for salmon swimming upstream to return to spawning grounds—they stay relatively still as they wait. “I didn’t expect them to be as still as they were,” Cusick said, who described them as “standing like statues.” It initially seemed like their thick fur might prevent the laser from penetrating enough to be accurate, but the wet environment and mist mats it down enough to get a good reading. If they’re partially submerged, however, it becomes a challenge; the laser cannot scan through water. Besides, Cusick needs to get a good recording of the bears’ bellies, which are plump with fish, berries, and other foods. “If we can get their belly just swinging right above the water, that’s the largest percentage of their volume and that’s what we hope for,” he said. “It’s a lot of patience, standing there like a photographer, waiting for a perfect shot. We’re doing the same with lasers.”

Inspired by his success, Cusick returned in 2019 and 2020 with a more precise and faster scanner. His work confirmed that people did indeed vote for the fattest bear last year: Bear 747. (The bears are numbered by the park for research purposes.) The winner’s volume was 22.6 cubic feet or 1,416 pounds, compared to the runners-up, who trailed the aptly named 747 at 1,250 pounds—Bear 32, or “Chunk”—and 1,212-pound Bear 151, or “Walker.” The internet sensation began humbly in 2015 as a National Park Service effort to educate the public about the bears, who can gain up to four pounds of weight a day preparing for winter, and their surrounding ecosystem.

There’s still work to be done regarding the accurate conversion of volume to mass. “The trick to getting the mass of the bear is knowing the density in pounds per square inch,” Cusick said. “That is the part of the equation that is still not determined.” He used a rough estimate to calculate weight, figuring that bears are 60 percent water and 40 percent fat.

The fat bears aren’t being scanned this year due to COVID-19 and staffing constraints; Cusick is always accompanied by a “bear monitor” who knows the bears. (The voting process remains the same this year, however.) But other researchers are eager to continue the work in their own areas of expertise. “I’m trying to get all the ‘ologists’ I work with to step into the 3D world that is possible with this sort of on-the-ground terrestrial laser scanning,” Cusick said. “It’s a fast-growing technology.”

And the “ologists,” as he calls them—mostly bear biologists so far—are interested. “I’m really excited about his work,” said Lindsey Mangipane, a polar bear biologist with the U.S. Fish and Wildlife Service. “It shows a lot of promise.”

A recent study shows that polar bear mass is an accurate metric for evaluating the links between what the bears eat and how the population is doing. As sea ice melts, bears are spending more time on land, where they lack access to their traditional prey, such as ringed and bearded seals.

Mangipane and others are working on a study using captive polar bears in zoos, which are trained to step on scales and already have a known weight, to gauge the scanning method’s accuracy. Scanning would be done throughout the year to make sure that the bears’ shape—how fat or skinny they are—isn’t throwing off the results. Tests could start within the year.

If the lidar scanning proves accurate for captive polar bears, scientists hope to use it as a noninvasive tool in the wild. Less-reliable sea ice means that the biologists’ job has become more dangerous than it used to be. “We used to go out and catch polar bears on the ice,” Mangipane said. “The last few years, the ice wasn’t good enough for us to go out. It’s important, moving forward, that we have new methods to get the data we need to make more informed management decisions.”