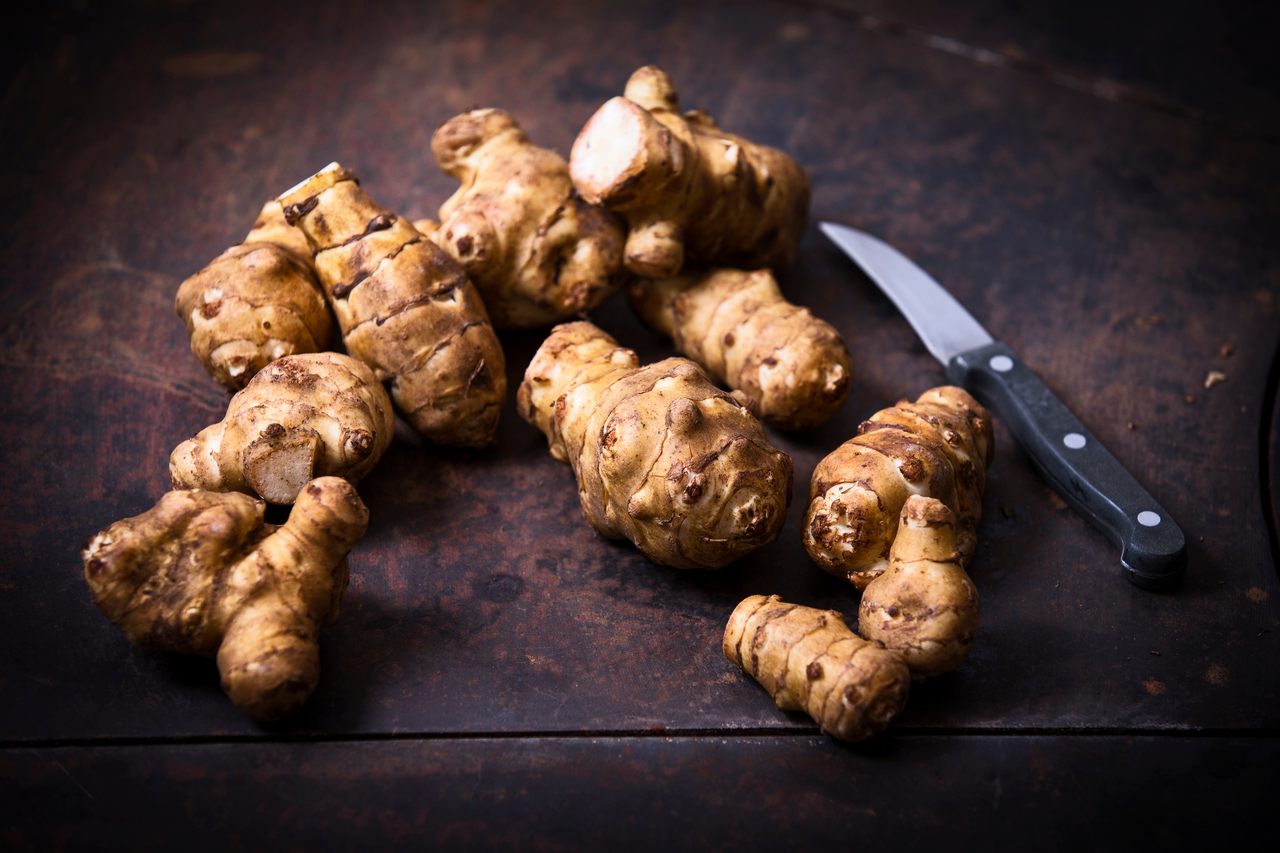 Jerusalem artichokes are easy to grow, but hard to peel and hard to stomach, for those with memories of hardship. Westend61/Getty Images
In This Story
Destination Guide

At the onset of the Occupation in 1940, Nazi troops seized about 80 percent of French food production, including about a quarter of its produce and half of its meat. They focused on choice products like potatoes, leaving the French with scraps. Before World War II, vegetables such as rutabaga and Jerusalem artichoke had been relegated to animal feed, but they soon became the centerpieces of French tables.

It’s no surprise that the French, who survived off of these hardy vegetables for nine years, could no longer bear the sight of them when rationing finally ended in 1949. Eggplants, zucchini, and potatoes returned to market stalls, but many other easy-to-grow root vegetables were palpably absent, so much so that when they finally started to appear on restaurant menus decades later, they were dubbed les légumes oubliés: the forgotten vegetables.

Fred Pouillot, owner of the Parisian culinary school Le Foodist, grew up in central France. To this day, he says, his 86-year-old mother “despises rutabagas.”

“She said that topinambours (Jerusalem artichokes) were the only thing she remembers eating during the war that was good,” he says. “But she has never cooked them again.”

Culinary historian Patrick Rambourg echoes this experience. “In families where grandparents had lived through that difficult period, there was absolutely no question of them appearing on their tables,” he explains. “They just contributed to the idea of everything that was so horrible about the Occupation.”

The war was just the nail in the coffin for many of these vegetables. Jerusalem artichokes, in particular, were small, difficult to peel, and caused digestive distress when eaten in excess, as did kohlrabi, which was usually only consumed by France’s poorest.

Still others had been replaced by tastier stand-ins long before the Occupation. When the potato was first introduced to France in the 17th century, it was rumored to cause leprosy and the plague. Thanks to the marketing genius of Antoine-Augustin Parmentier, potatoes later began to take the place that had been occupied by parsnips on French tables since the Middle Ages. As a result, the white winter root began its long fade into oblivion.

It wasn’t until the early 2000s that many of these vegetables once again took root in the hearts and on the menus of the French. Loïc Martin, owner of wine bar Martin and restaurant Robert, claims their renaissance arrived with the “bistronomy” movement. The term, coined by French journalist and food critic Sébastien Démorand in 2004, refers to a trend away from fussy cuisine towards honest bistro food made with local products. Humble, old-fashioned root vegetables turned out to be “ingredients corresponding with this philosophy,” he explains.

Compounded with the influence of Japanese and Anglo-Saxon chefs, “forgotten” vegetables soon began appearing with startling regularity on French tables. Liran Tal, a chef and restaurant consultant, is a “big fan of forgotten vegetables.”

“My cuisine is based on local, seasonal ingredients combined with Mediterranean influences and cooking techniques from around the world,” he explains. “When it comes to forgotten vegetables, I like charring kohlrabi or rutabaga in a charcoal oven, slicing it thinly like a carpaccio, and serving it with olive oil and date vinegar.”

But part of this trend is also about a return, not just to root vegetables, but to the historical roots of French cuisine. Kristen Beddard, the American founder of the Kale Project, which sought to reintroduce kale to French farms and tables beginning in 2012, recalls how much easier it was to sell locals on kale’s history, rather than the health benefits that so captivated its American proponents. “At the end of the day, the French don’t fall for food fads,” she says.

This attitude, explains Rambourg, is part of a greater trend: one of finding the exotic, not from far-flung lands, but from home. “We hold onto something that’s linked to our own land, to our own agriculture,” he says. “It’s reassuring to eat something like that, because the global environment, in recent history, is not reassuring.”

This culinary nostalgia is far from a uniquely French issue, according to Ken Albala, food historian and professor of history at the University of the Pacific. “My mother’s generation, who grew up in the Depression, ate just unspeakable things,” he says, citing lungs, which are now illegal to sell for consumption* in the U.S. “She kind of looked at those with nostalgia but would never make them for the family,” he says. “Even though she didn’t leave the home to work, she used convenience foods. She was totally into modernity and technology and science and instant everything.” The generation that followed, he explains, “is exactly the opposite,” with their love for everything from sourdough to home-made charcuterie.

But Albala believes that the current subsistence cooking trend is approaching its end. “It’s been at least 15 years or so now that the do-it-yourself, craft, cook-from-home movement has been going,” he says. “Since the first economic downturn.” He believes that we are poised for another period of high-tech cooking, like the convenience foods of the 50s or the molecular gastronomy of the 90s. “Once this is all over and the economy is back, I think people are going to get tired of the do-it-yourself again,” he muses.

In France, the pendulum will likely swing as well, but perhaps not so violently. As is often the case in France, trends are more subtle and tend to leave their mark for longer than in the U.S. “Consumers have found their way back to the farm,” says Martin. He doesn’t think they will leave that behind so easily. And after all, despite being back on the culinary landscape for a few years, Jerusalem artichokes and rutabagas are still only eaten occasionally, Rambourg explains. “They aren’t common vegetables.”

But even if these vegetables remain uncommon, one thing is for certain: They have successfully been dissociated, if not in collective memory, at least in individual memory, from times of hardship.

“Maybe we needed to wait for the second or third generation,” remarks Rambourg. “We’re moving away from this history and this painful past of the Occupation. In time, you know. Not in our memories.”

Teddy Bears Are Taking Over Prince Edward Island in Canada

When you can't throw a vegetable at a rotten official, call them one.
farms

Evelene Spencer was the force behind the wartime campaign that encouraged the country to love fish.
Video • PinDrop