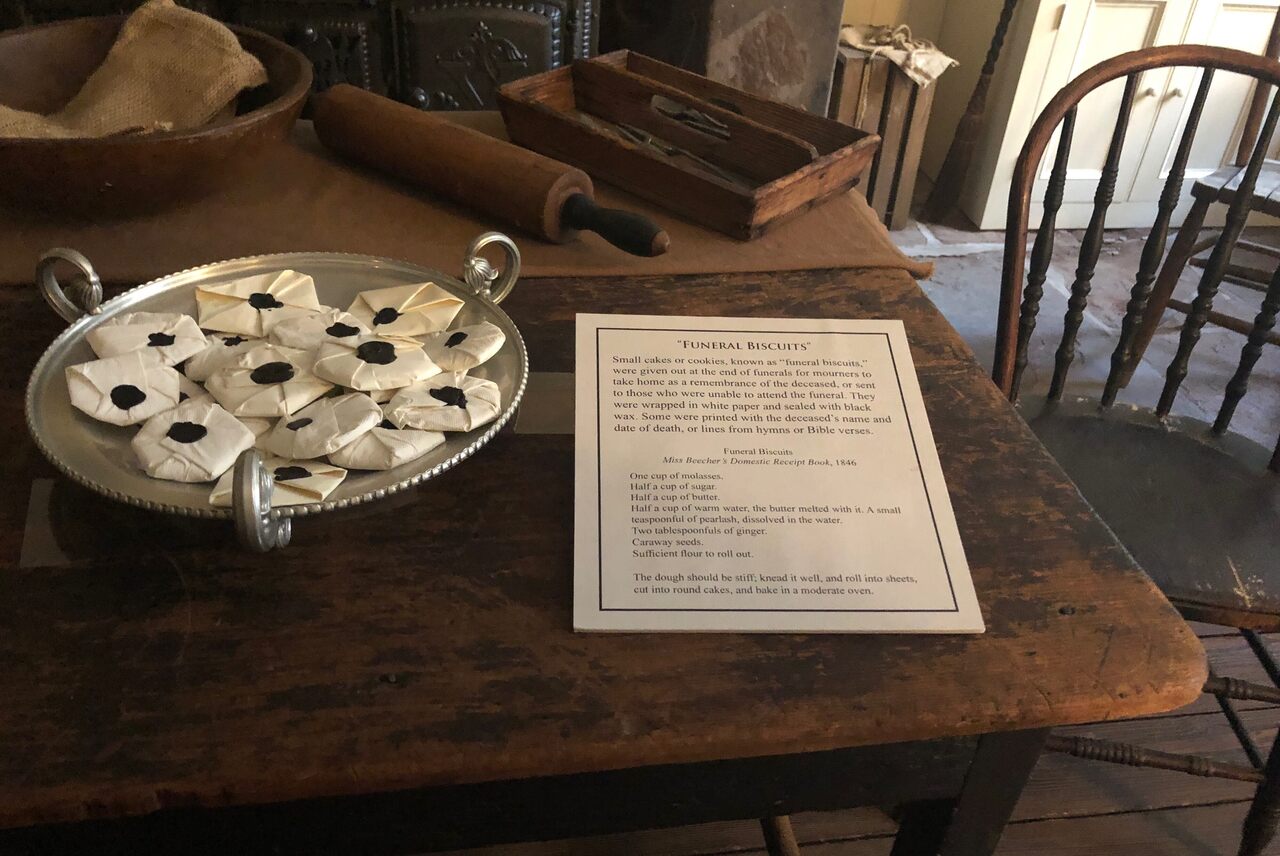 Around Halloween, visitors to the Merchant's House Museum can pick up a funeral biscuit to take home. Jessica Hester/Atlas Obscura

If you visit the Merchant’s House Museum, in New York City, on a Saturday in October, chances are good that you’ll leave with a funeral biscuit. Every autumn, the museum—the 19th-century homestead of the wealthy Tredwell family—mounts an exhibition of mourning garments and rituals. A black wreath hangs on the front door, and the curtains are drawn so the home is dark except for the flare of candlelight. The mirrors are veiled with black crepe, and lilies are arranged as they would have been to cloak the smell of a corpse laid out for a viewing in the parlor. On a table in the downstairs kitchen—province of the servants—there are stacks of slightly savory, ginger-colored cookies shrouded in white wrappers and sealed with black wax. Ann Haddad, the museum’s historian, bakes a fresh batch of these funeral biscuits each weekend, so that visitors can taste what it was like to mourn like a Victorian.

Funeral biscuits predate the Tredwells: They go back at least to the late 18th century, when The Gentleman’s Magazine, a London monthly, ran a short blurb about an advertisement for the cookies glimpsed in a shop window in the North Yorkshire town of Knaresborough. The writer—who signed off with “Syne”—couldn’t quite pinpoint “the origin of this ceremony,” but wrote that it seemed to call for “a kind of sugared biscuit, which are wrapt up, generally two of them together, in a sheet of white paper, sealed with black wax, and thus presented to each person attending the funeral.”

The little parcels were sometimes inscribed with poems, Bible verses, or other memento mori. One wrapper, printed in Yorkshire in 1828, to commemorate the passing of one 52-year-old Mrs. Oliver, lamented, “How feeble is our mortal frame! What dying worms we be.” Occasionally, the dough was pressed into molds that left impressions of skulls, hearts, or other shapes. In 18th- and 19th-century England, it was customary for biscuits like these to accompany a formal, printed funeral invitation, “wrapped in a black-edged paper printed with suitably reflective verses and sealed with black wax” and tied with a black ribbon, writes University of Bristol folklorist and historian Helen Frisby in Traditions of Death and Burial. The more ornate wax seals might depict an hourglass, skull, or cherub flying toward Heaven. The cookies were also sometimes handed to mourners directly, or mailed to those who couldn’t make it.

The cookies often needed to be baked in fairly big quantities in a short period of time, so some bakeries made it clear to their customers that they could handle it if a sad, frazzled family needed help. Edmund Hollingshead, a “confectioner and biscuit baker, &c,” placed an ad in The Derby Mercury, in Derbyshire, England, in August 1837, guaranteeing that he could provide “Bride Cakes and Funeral Biscuits made on the shortest notice.”

The macabre confections are a mashup of various traditions—and possibly anxieties about death and the afterlife. Haddad, the museum historian, wonders if they have roots in “sin eating,” a murky tradition said to have been practiced in Wales and elsewhere in the United Kingdom. It involved recruiting living people—usually the poor or desperate, or, as the Buffalo Commercial crassly put it in 1900, “a long, lean, ugly, lamentable rascal”—to eat and drink over the bodies of the deceased, symbolically consuming their earthly sins so that they could ascend to Heaven. Jane Aaron, an emeritus professor of English at the University of South Wales, traces sin-eating’s knotty path in a 2013 book about the Gothic tradition in Wales. In it, Aaron cites English antiquarian John Aubrey, who described the practice in the late 1680s as “an old Custome at Funeralls” in Wales and England, in which lower-class neighbors would stand over the body, working their way through bread and beer. In exchange for a sixpence, Aubrey wrote, the person “tooke upon him (ipso facto) all the Sinnes of the Defunct, and freed him from Walking after they were dead.” In the Victorian period, biscuits “were an essential element” of British funerals, historian Peter Brears explained in a segment from The Great British Bake Off. According to the show, the biscuits held on in parts of Britain until the 1940s, when they fell out of favor amid wartime rationing.

Whether the cookies evolved from the sin-eating tradition or not, at some point, they made the leap across the pond. In many places in early America, the cookies were so common that they were barely even remarked upon, writes Jacqueline S. Thursby in Funeral Festivals in America: Rituals for the Living. “Mentioning them in a history,” she writes, “would be like mentioning that the sky is often blue.”

Recipes varied, but often called for some mixture of molasses or treacle, ginger, and caraway seeds. Other varieties were more like shortbread, and still others similar to ladyfingers, reported an unnamed Englishwoman in the New-York Daily Tribune in 1893. She was bewildered and a little bummed out when her new American friends kept offering her bites of oblong sponge cookies without realizing that her “associations with them are of the gloomiest sort.”

Thursby reports that funeral biscuits were common among British and German Americans from Virginia to Pennsylvania, and some traditions included the practice—also seen in England and elsewhere in Europe—of consuming them with (or even dunking them into) wine or beer. In Montgomery County, Pennsylvania, Thursby writes, mourners going from the church to the graveyard would first stop by a young woman holding a tray of biscuits, and then again at a young man inviting them to sip spirits. They wound up with a mouthful of each.

The cookies are also the product of the Victorian obsession with household management as both art and science. In the pages of domestic handbooks and etiquette manuals marketed to women, mourning wasn’t just a part of life, but a practice that could be—and ought to be—refined and perfected. The recipe Haddad serves at the Merchant’s House Museum is a modern riff on the gingersnap recipe in Miss Beecher’s Domestic Receipt Book, a mid-19th-century volume that included everything from crumpets and jellies to little pea-sized bits of cod, “an excellent relish for a convalescent.” Beecher’s recipe called for sugar, molasses, ginger, butter (melted in a bit of warm water), and pearl ash, or potassium carbonate, a leavening agent. Somewhat unhelpfully for a modern cook, it omitted baking time and temperature.

“Nowadays we use baking soda for the pearl ash,” Haddad says. And there’s no need to eat the biscuits by candlelight—unless you like your dessert with a sprinkle of spookiness.

These beautiful mementos of mourning have all but disappeared.
mountains

In this remote Swiss town, residents spent a lifetime aging a wheel for their own funeral.
archaeology

The United Kingdom is experiencing a revival of interest in an ancient burial method.
food

In an age of distance, we can still connect in the kitchen to mourn, memorialize, and heal.
Video

This family-owned bakery is one of the last places in Brooklyn to sell the Nation of Islam–inspired bean pie.
Want to see fewer ads? Become a Member.
From Around the Web
Travel With Atlas Obscura
Are you a curious traveler?
Join local experts in 50+ destinations for a once-in-a-lifetime journey.
View Our Trips
Thanks for sharing!