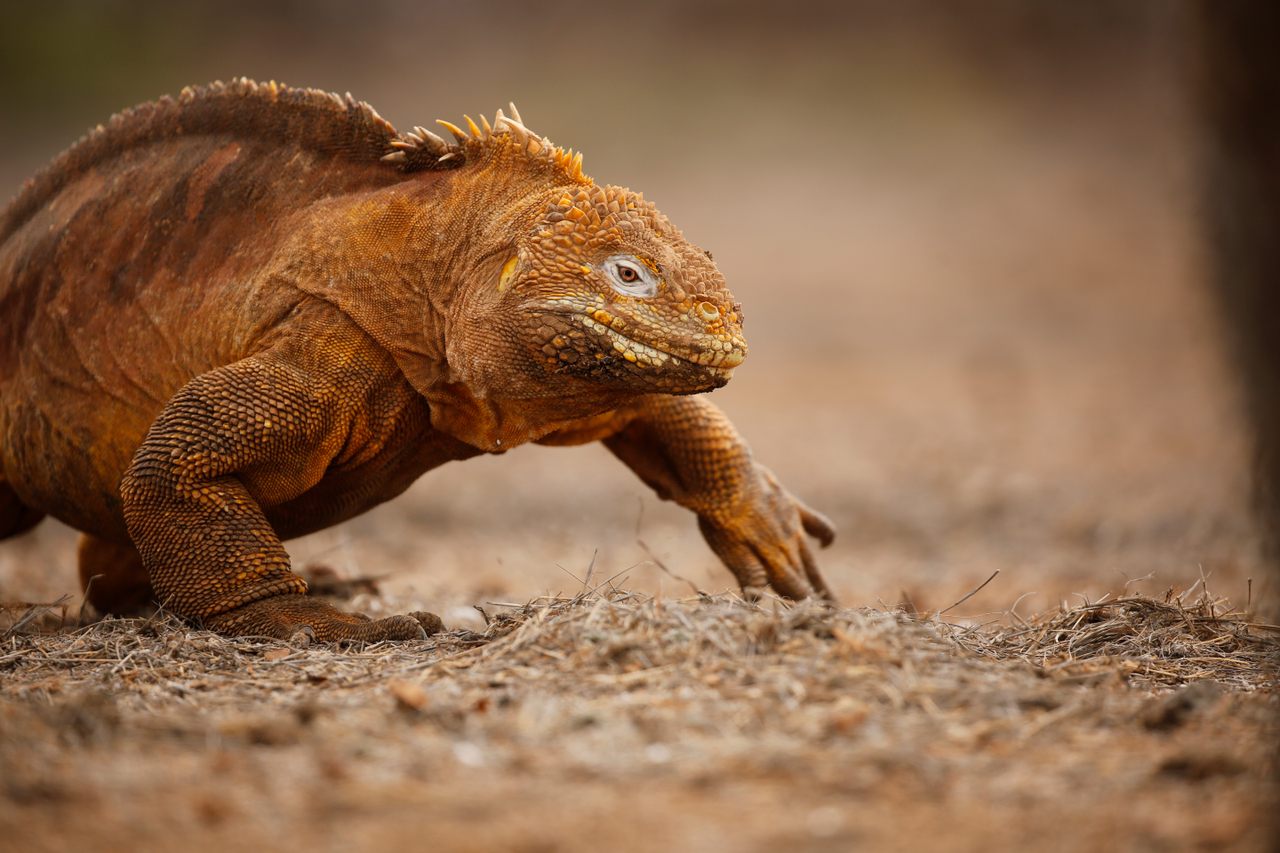 For the first time since the days of Darwin, these iguanas are living on Santiago Island. Courtesy L. Ortiz-Catedral
In This Story
Destination Guide

The Galápagos Islands are often considered the cradle of evolutionary theory, where Charles Darwin developed an inkling of how creatures relate, persist, and change over time. But since the 19th century, a human presence there has reshuffled the archipelago’s faunal cards, introducing invasive species and pushing native ones to extinction.

Perhaps no species has been subject to this existential rigmarole more than the three types of Galápagos land iguana—terrestrial cousins of the famous local marine iguanas. In January 2019, scientists repatriated 2,150 of these three-foot-long lizards to Santiago Island from the overpopulated North Seymour Island, in an effort to re-establish the animals in their native habitat—a place they haven’t been seen since the days of Darwin.

According to researchers, it was a herculean task. “Transferring such a large number of animals required a tremendous coordinated effort,” writes Luis Ortiz-Catedral, a conservation biologist at Massey University in New Zealand and a scientific adviser for the operation, via email.

But even the idea of such a transfer—in this case, a collaboration between the Galápagos National Park Directorate and the Galápagos Conservation Trust—may not have been possible without a man named George Allan Hancock. In January 1932, nearly a century after Darwin’s time in the islands, Hancock, a ship captain and industrialist, was sent by the San Diego Zoo to collect live iguanas from the Galápagos.

But when he arrived on Baltra Island, where the greatest abundance of lizards were then living, Hancock found iguanas that looked malnourished and gaunt—probably thanks to the non-native goats there that had been chewing up the lizards’ habitat. Worse still, he couldn’t find a single iguana on neighboring North Seymour Island.

Putting two and two together, Hancock did what any ad hoc conservationist would do: He shipped iguanas from the former island to the latter. Though he’d been sent to the Galapagos only to retrieve the lizards, he may have figured his job would be for naught if he took some of them home and let others die off.

“A good idea I believe,” wrote Cy Perkins, a scientist aboard the expedition. “No harm anyhow, as far as I can see.”

Not long after the Hancock expedition, cats, rats, dogs, and the construction of an American military base killed off the Baltra Island iguana population—the only place today where humans and land iguanas overlap. (The reptiles were repatriated to Baltra in 1991, taken from the North Seymour population that Hancock had first propagated.)

Thankfully, the logistics of moving big lizards have evolved since Hancock’s gung-ho efforts nearly a century ago. After being kept in quarantine for 30 days, these iguanas were put in crates and boated nearly 90 miles to the coastal regions of Bucanero and Puerto Nuevo, on Santiago Island (where Darwin once complained that there were so many iguana burrows that his team couldn’t pitch their tents).

One thing Santiago Island’s newest residents won’t have to worry about is dangerous neighbors: Invasive species like donkeys and goats, which chew up the habitat, and cats and dogs and feral pigs, which prey on the lizards’ eggs, were eradicated in a separate conservation effort in the early 2000s.

With those destructive invaders gone the way of the dodo, land iguanas in the Galapagos may find that this new chapter of life is a little smoother—and will last a little longer—than they’re accustomed to.

The Glittery Legacy of Lead at a Historic Native American Site

Lizards Are Evolving in Response to Fierce Hurricane Seasons

They need to get a grip.
preserved specimens

From squeaky beans to arsenic scares, conservation is full of surprises.
animals

Discovering the trait may help scientists protect the tuatara, which has been around since the dinosaurs.
islands

On a Remote Island, Locals Protect Seabird Eggs They Once Hunted

A century-plus tradition on the Italian island of Linosa evolves from sustenance to conservation science.
Video • Object of Intrigue

3:32
Want to see fewer ads? Become a Member.
From Around the Web
Atlas Obscura Trips
Expedition Galápagos: Island Wildlife & Ecology
View This Trip
Thanks for sharing!