How Giant, Intelligent Snails Became a Marker of Our Age - Atlas Obscura 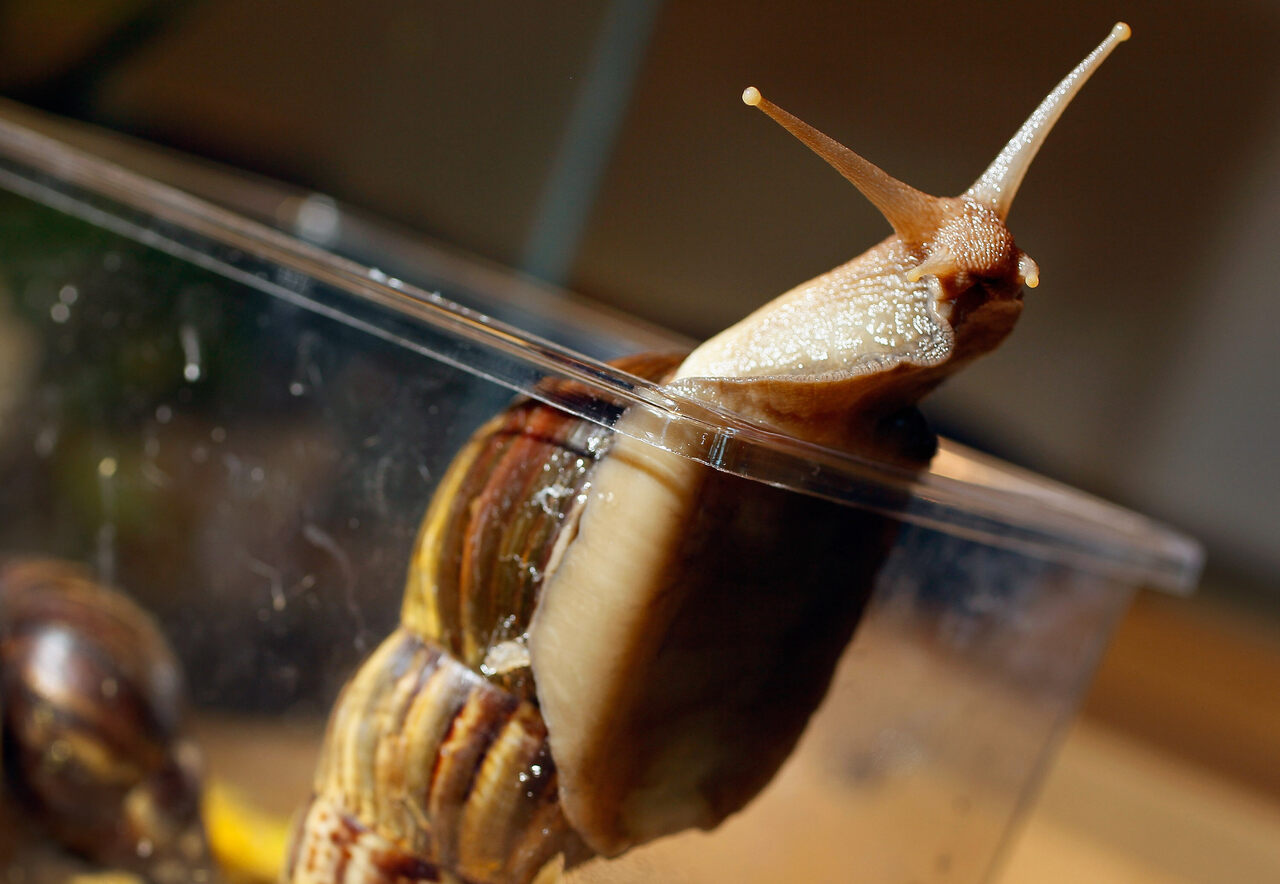 Giant African land snails are among the largest land snails in the world. Joe Raedle/Getty Images

Giant African land snails are survivors. Big as a fist, their cone-shaped shells can reach six and a half inches in length. If the place where the snails are living becomes too dry, they can secrete a special mucus over their shell and retreat inside—where they can survive in a resting state for months. They often live on the ground, but they can also climb trees. For invertebrates, they live a long time—five to seven years—which means they’re smart. They might sneak into a trap, eat the bait, and then back out, unapprehended.

They also excel at reproduction. Each giant African land snail has both male and female parts, so any time one dashing snail meets another, they can mate. In a pinch, a single snail can produce more snails on its own. The number of eggs that survive will be low, but each one of those snails, if kept in isolation, can produce another small generation of snails on its own. And as soon as two of those lonely snails get back together—boom, they’ll start producing hundreds of robust eggs again.

“It makes eradication hard, because you have to get every last snail,” says Amy Roda, an entomologist for the U.S. Animal and Plant Health Inspection Service (APHIS). “They have amazing survival mechanisms.”

All these talents—and our own migrations—have helped the giant snails rapidly colonize the globe over the past two centuries. They have spread so far, so fast that they may be one defining sign of our times. The shells they leave behind can enter the geologic record, and survive for ages to come as a marker (“we were here”) in deep time. In the journal Anthropocene, malacologist Hausdorf Bernhard, of the University of Hamburg, writes that Lissachatina fulica, the giant African snail, reveals humans’ impact on the world and will create fossils that are “robust and frequent … large enough to be rapidly detectable, and characteristic enough to be easily identified.” These snails are part of our lasting legacy on Earth.

Many of the scientists who think about geologic time and the influence of humans on the planet think that the Earth has now left the Holocene, which began around 11,650 years ago with the end of the last glacial age, and entered a new one—the Anthropocene. Geologic eras are defined by the signals they leave in the crust of the Earth, layers that can still be observed millions of years later. A boundary in geologic time might be marked by an important change in the fossil record or a geochemical anomaly. If this is a new era, then, scientists need to identify the markers that define it and that will linger in the ground for eons.

There are all sorts of weird changes currently being recorded in the ground that could signal a new slice of geologic time—changes in carbon isotopes or nitrates, the presence of plastics or fly ash. The most promising candidate, worldwide, is the scattering of plutonium-239 and other radioactive isotopes that spread across the world and settled into the ground at the dawn of the nuclear age. Anywhere on the planet, this chemical signature marks a very specific point in time, and it will linger.

So far in this conversation, animals and plants have played a less prominent role. In the geologic record, sudden appearances and disappearances of certain abundant species are needed to mark a time boundary. “There has perhaps been an assumption that the biological markers are less promising, as they take time to progress around the planet,” says Colin Waters, of the University of Leicester and the British Geological Survey, who studies the stratigraphy of the Anthropocene. “It is difficult to think of examples where there is an almost instantaneous extinction of a species worldwide, or sudden widespread migration of a species that would coincide with the mid-20th century.”

But biological markers may still signal the boundary of profound human influence on the planet, and they have some advantages. Fossils can often be recognized at a glance, which makes them easier to see in the field than a radioisotope. There are a few key criteria that make for strong biological markers. “I want an organism that has a skeleton—the more robust the better,” says Mark Williams, a paleobiologist at the University of Leicester. The animal or plant, whatever it is, also needs to have proliferated (or disappeared) quickly, all around the planet. Certain bivalve mollusks are good candidates. They have thick, easily preserved shells, and were rapidly transported around the world as ships started moving from port to port with living invaders clinging to their hulls or tumbling in their bilge. Giant African land snails could be another.

Two hundred years ago these snails—known as both L. fulica and Achatina fulica in the scientific literature—lived only on the coast of East Africa. Starting in the mid-19th century they began to appear much further afield. In 1847, William Benson, a British civil servant and mollusk enthusiast, picked up a few in Mauritius and brought them to India. Gifted to a friend, the snails ended up in a garden near the Asiatic Society Museum in Calcutta, where they began to thrive. Around the turn of the century, they made it to Sri Lanka, and over the next few decades started to spread across Asia—down to the Malay Peninsula, across Thailand, Vietnam, South China, and Taiwan. During World War II, Japanese soldiers brought the snails to Pacific Islands, including the Philippines and New Guinea, with the intention of cultivating them as a food. (They’re often boiled, and are said to have a unique texture.) By the 1980s, the snails were in West Africa and made the jump across the Atlantic to the Caribbean and Brazil. In this century, they have taken hold in Central America, Argentina, and Cuba. They are counted as one of the 100 most invasive species on the planet by the Global Invasive Species Database. A recent eradication campaign in Florida eliminated 168,000 of them.

Part of the snails’ global triumph comes from the lifts that humans have given them around the world, but their reproductive resiliency is really behind their success. Fair warning, this can get gross. On one Philippine Island, an eradication campaign involved destroying 45 million snails in just seven months. Roda, the APHIS entomologist, once visited a field in Trinidad—a perfect snail environment, she says—where giant African land snails had made themselves at home. “They were crawling up on trees and on the buildings—literally thousands of snails within an acre or so, a small property. They can explode.”

All that, writes Bernhard in the Anthropocene paper, helps make these snails a good candidate for marking this moment in time. “Compared to many other species that needed millennia or longer to spread, the spread of L. fulica around the globe within 200 years with the help of humans can be considered geologically almost instantaneous,” he writes.

“It is a very good potential marker,” says Williams, the paleobiologist, in part because the snail’s arrival in different parts of the world can be dated with a good bit of precision. “In deep time, you can talk about a million years,” he says, and the resolution at which we can date the past grows fuzzier over time. “But in the Anthropocene, in the historical context, we want to be able to talk on an annual basis—we want to recognize 1952.” With snails, in many places, we can do that. Hundreds of years from now, thousands of years from now, and even further into the future, giant snail shells will linger in the ground, announcing not just their presence, but ours—and how we changed everything.

It was part of an “enduring rivalry” between African-American and French cooking in the White House.
anthropocenesnailstimegeologyfeatureshistory
Keep Exploring
holidays

Why Calendars Are So Weird, and What Might Be Done About It

Imagine a calendar that is the same every year—sort of.
victorian

To stave off boredom, some people donned sheets and menaced the public.
cemeteries

After an African-American cemetery was bulldozed, families wondered what happened to the graves.
independence day

Before America Got Uncle Sam, It Had to Endure Brother Jonathan

Brash, bold, and bigoted, he made for an uneasy national mascot.
Video • PinDrop

It's hard to find rocks more than 3.6 billion years old.
Read more
Thanks for sharing!