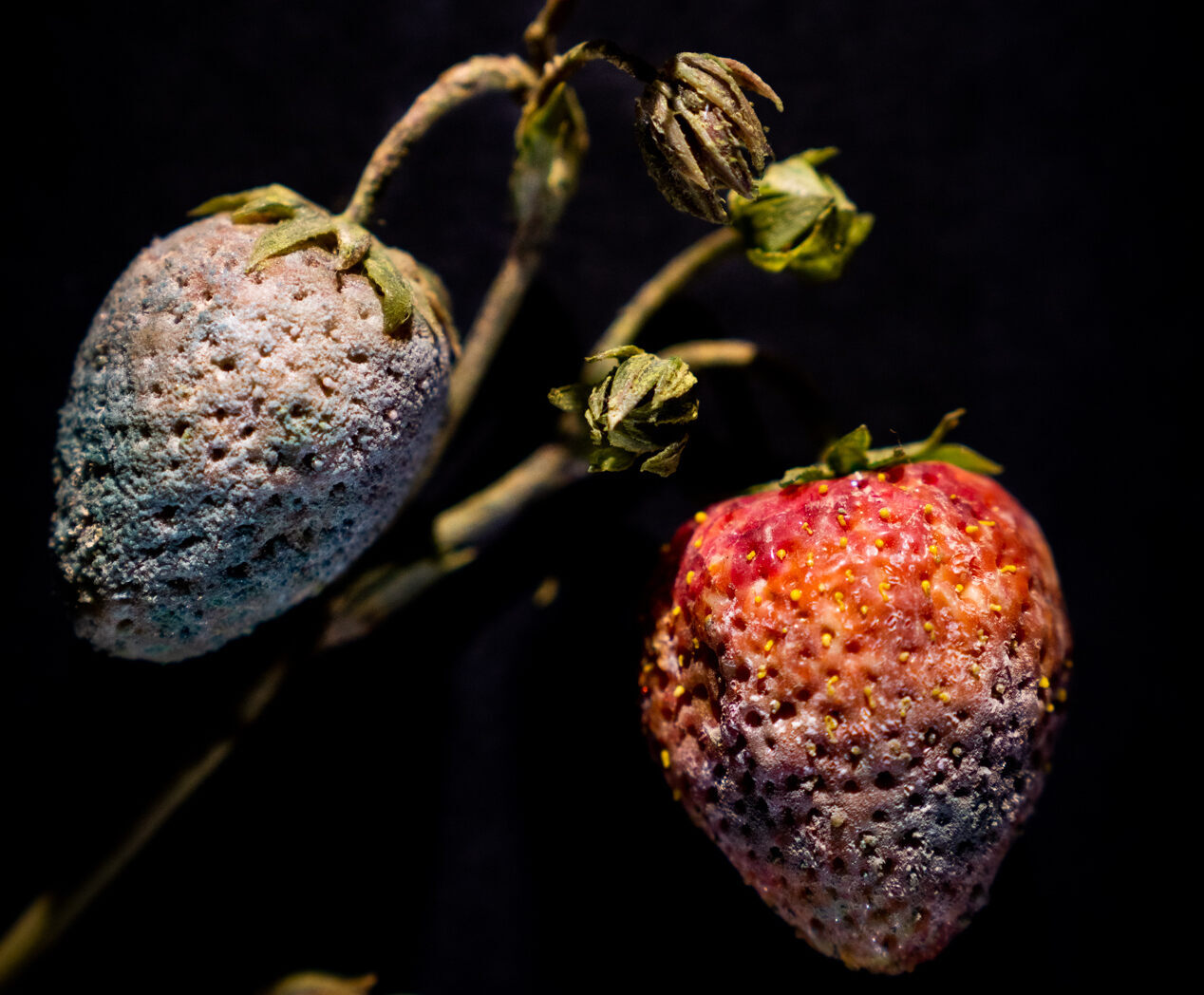 There’s something a bit brain-scrambling about this particular buffet of fruit. If you’ve ever let something languish on the counter or in the fridge a little too long, the white fuzz blanketing the shriveling strawberries or the spots of rot on the surface of a pear might look fairly familiar. But there’s something else that doesn’t feel quite right.

“You almost expect to be able to smell it,” says Scott Fulton, a conservator at the Harvard Museum of Natural History. “We all know what a rotten apple smells like.” But the fruit Fulton has been working on doesn’t smell at all: It’s made of glass. Beginning August 31, 2019, it will all be behind glass, too, back on temporary exhibit at the museum after nearly two decades in storage.

The fruit models are part of the larger oeuvre of Rudolf Blaschka and his father, Leopold, Czech artists who spent five decades making plants out of glass. The museum has 4,300 of these detailed models, depicting 780 species and collectively known as the Ware Collection of Blaschka Glass Models of Plants (more casually and affectionately, the “Glass Flowers”). As the conservator tasked with caring for all of the glass models, Fulton knows them well—and he knows they can be pleasantly disconcerting for visitors. The shriveling berries, the curling leaves, the textured bark—it all looks so true to life that it’s hard to process that they’re really, truly made of glass. “Your mind tells you that if you blow on a blossom or branch,” Fulton says, “it would move.”

The decaying fruits were made by Rudolf Blaschka between 1924 and 1932. Like the rest of the glass plant models, these gnarly specimens were commissioned by the first director of Harvard’s Botanical Museum, George Lincoln Goodale, as teaching tools. These were designed “to show fungi in particular, and also bacteria that infect the plants, and symptoms that they show,” says Don Pfister, a mycologist and curator of the Farlow Library and Herbarium at Harvard. The collection highlights the strains of misfortunes that could befall an orchard, from peach leaf curl and gray mold to pear scab, fire blight, leaf spot, and shot-hole disease, which makes leaves look as though they’d been riddled with bullets. Blaschka sometimes used a single branch to illustrate the devastating progression of some pathologies: One, heavy with six apricots, shows the progression of brown rot, as it takes a fruit from healthy to totally mangled.

The Blaschkas worked from nature, not books. They collected specimens to work from—meaning that, even if the models don’t smell rank, their studio may have. Working from life helped contribute to the fruits’ startling fidelity. “Don brought in a rotten apple for me with brown rot on it, and it looked exactly like what they modeled,” says Jenny Brown, curator and collection manager.

Many of the glass flowers have been on display continuously since 1893, but the decaying fruit all went into storage in 2000, when staff determined that their display, on a landing of the museum (now a gift shop), was too busy and was tricky to keep under climate control, says Brown. The models, which sit on foamboard mounts, spent nearly two decades on cushions or custom pillows in archival boxes on shelves in a climate-controlled room. “From a conservation perspective, it was a good thing they came off exhibit, so they could rest, if you will,” Fulton says.

“Glass seems like it should be impervious to just about anything,” Fulton says. Blaschka even put that hypothesis to the test, Pfister adds, tucking some models under the eaves of his house and checking on them every year to see whether they had changed. But in the museum, they faced light, vibrations from visitor footsteps, and soot on their surfaces from the days when the building was heated by coal. (This is something other older museums have dealt with, too.) Plus the models were subject to “disfiguring mends” from well-meaning conservators, Fulton adds, who sometimes used glue that has discolored with age.

And then there’s the inherent vice of the models themselves. “The glass flowers are made of chemical compounds, not just glass,” he says. To achieve the uncanny realism with the believable coloring and sheen, the Blaschkhas covered the glass surfaces with a proteinaceous glue, and then built up layers of paint from there. “In dry conditions, it shrinks, pulls away, delaminates the paint, and—in worst cases—it pulls apart the glass itself,” Fulton says.

The Blaschkas didn’t leave detailed records about their process, but as shards of glass have fallen off over the last 10 or 15 years, researchers have studied them to see what insight they can gain into how the artists worked. By taking samples to the labs at the Harvard Art Museums and Museum of Fine Arts, Boston they learned that the artists used lead and potassium oxides to lower the melting point of the glass, and give them more latitude for manipulating their enamels.

More than a century later, the lead oxide is behaving in ways that the artists likely didn’t expect. Fulton explains that the compound is hygroscopic, or prone to readily bonding with water. “On summer days, when humidity goes sky high, the lead compound migrates through every capillary and crack it can find, and it comes up,” Fulton says. Over many years, he adds, the lead oxides in a few of the models have migrated to the surface, where they have “recrystallized on exposure to air as a visible white powder,” forming pale splotches.

But such imperfections can be hard to spot on something designed to look mottled or moldy. “Sometimes it’s not that easy to differentiate between what they meant to be there and what’s there now,” Fulton says. “Probably, to the untrained eye, [the white spotting] could easily be confused with the purposeful rendering of a fungal disease adjacent to it.” After eyeballing the model led to the hunch that lead oxide was causing the spotting, X-ray diffraction confirmed the diagnosis. Written descriptions, condition and treatment reports, and photographs will capture the state the models are in now, for future researchers who may have similar questions.

When the exhibition, Fruits in Decay, winds down at the beginning of March 2020, the models will go back to storage. Anyone who sees them before they return to the shelf might find themselves a little more attuned to the gnarliness all around. For example, before she saw the model showing symptoms of peach leaf curl—rolled, reddened leaves caused by the fungus Taphrina deformans—Brown had never heard of the plant disease. Then, “I was walking down the street near the office, and a tree had the peach leaf curl,” she says. “I recognized it from the model, and I spotted it in real life.”

Masks, ventilators, and Zoom recordings may one day be the artifacts of our time.
natural history museums

In Museums, Real Rhino Horns Are an Endangered Species

U.S. Museums Hold the Remains of Thousands of Black People

Cadavers from marginalized communities have been co-opted for collections since the 1700s.
Video

The biggest blow to beer since Prohibition.
Read more
Thanks for sharing!