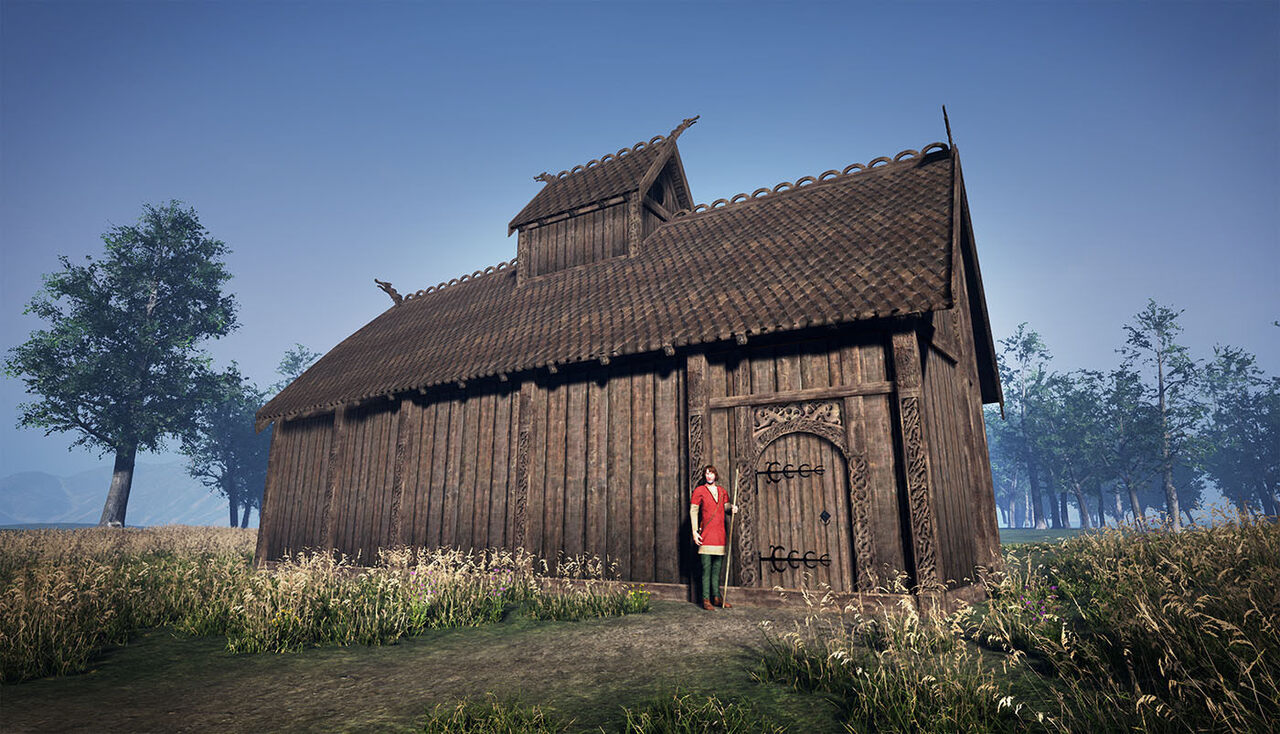 A digital reconstruction of what the godhouse may have looked like. Courtesy University Museum of Bergen
In This Story
Destination Guide

The village of Ose, tucked among Norway’s western fjords, is what one might call prime Scandinavian real estate, if you’re into the misty essence of storybooks and sagas. It’s not surprising then that there’s a market for new housing in the area, or that it once hosted temples to leading figures of the Norse pantheon.

On the site of a forthcoming housing development, archaeologists from Norway’s University Museum of Bergen recently discovered structural remains of a pagan temple, or “godhouse,” thought to date back to the eighth century. Significantly, these remains mark the first known godhouse ever discovered in Norway, LiveScience reported, though other examples have previously emerged in Denmark and Sweden.

Though the building itself is long gone, the foundations say a great deal about the history of pre-Christian Norse religion, and the region as a whole. The postholes identifiable in the ground suggest a building around 45 feet long, 26 feet wide, and up to 40 feet tall. Such large godhouses were an innovation from the sixth century, following centuries of outdoor prayer at smaller, more localized sites. According to Søren Diinhoff, an archaeologist at the University Museum of Bergen and part of the team that uncovered the site, temples like this emerged after Nordic societies began to interact with European communities to the south, where Christianity reigned supreme. Norse prayer sites subsequently began to look more like Christian churches: large, indoor, centralized architectural expressions of devotion that also served as community hubs. Their pitched roofs also propped up towers, which directly referenced the style of the Christian basilicas; four postholes in the center of this godhouse mark where the tower would have been.

The grandeur likely reflected something beyond religion, too. Another way in which Nordic societies embraced southern influences, Diinhoff writes in an email, was to stratify by class and concentrate power among a wealthy elite. Those newly minted power players may have had a role in financing and organizing godhouses as a show not only of faith, but of social clout. The largest farms or manors, Diinhoff writes, became themselves the sights of religious feasts. In this way, he adds, the wealthy and their “manors take control over society ideology.” He adds that this godhouse would likely have been on the grounds of a family farm.

Of course, much of what the site reveals is simply the stuff of good, old fashioned, virile pagan ritual. The godhouse would have hosted ceremonies for the midsummer and midwinter solstices, and, accordingly, a large “phallus stone” also stands nearby, offering a skyward prayer for fertility. (The stone was, in fact, discovered in 1928—a hint to researchers that the area might be hiding more.) The researchers also found cooking pits and animal bones, evidence of meats that were prepared for figurines of gods such as Odin, Thor, and Freyr, and also enjoyed by the worshippers themselves. These figurines were likely left behind on the site, writes Diinhoff, but unknowingly ploughed away at some point over the last millennium.

Tellingly, the cooking pits predate the godhouse, and suggest even earlier religious activity on the same grounds. The researchers have also found remains of two traditional “longhouses” on the site—both older than the godhouse—where farmers would have kept their livestock. At its southern end, one of these longhouses contained a circular area, a shape that Diinhoff says is always associated with religious practice in Nordic archaeology of this period. These older religious sites—the longhouse’s circular area and the outdoor cooking pits—are known as hørg, while the later godhouses, writes Diinhoff, are known in the sagas as hov. With both types of place present in Ose, Diinhoff believes the site captures the partial evolution of Norse religious practice through successive generations of one family: As they rose in the social ranks, they also emerged as the focal point for the community’s religious activities.

Beginning in the 11th century, when Christianity became the official religion in Norway, many old Norse religious structures were destroyed by state forces. Diinhoff and his team do not yet know whether this site was among those violently erased, but luckily, the new housing development will preserve the ritual grounds as green space.

Syrians Won't Give Up on the Great Mosque of Aleppo

In 2013, the mosque's minaret shattered into 2,000 pieces. A restoration team aims to put them back together.
architecture

An undergraduate archaeologist is trying to make sure the prewar city isn't forgotten.
temples

From Kushites to Christians, an old site in Sudan has new stories to tell.
volcanoes

The Red Lion is considered to be the oldest Elizabethan playhouse—and it may have recently seen the light of day.
Read more
Thanks for sharing!