There Is Gold in Seawater, But We Can't Get at It - Atlas Obscura
Want to see fewer ads? Become a Member. 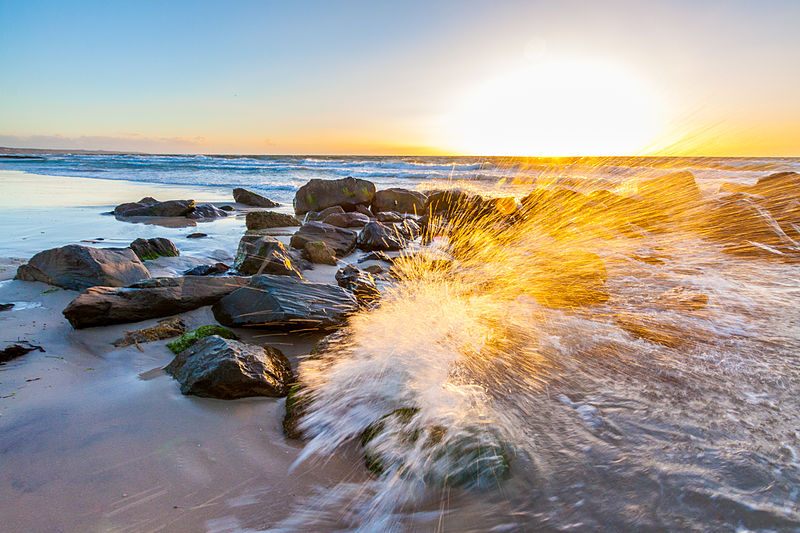 There's gold in the ocean! Ikhwan Zailani yuslim/CC BY 2.0

The oceans are filled with gold, just floating out there for the taking! The trouble is figuring out how to extract the precious metal. For over a century, dreamers, con artists, mad men, and well-intentioned inventors have been trying to find a way to kickstart an oceanic gold rush. So far, the search for all those riches has proved fruitless. But that doesn’t mean people aren’t still trying.

According to the National Ocean Service, our oceans hold some 20 million tons* of gold, suspended in normal seawater. But this gold is spread throughout the normal mineral content of seawater to the tune of “parts per trillion.” As the NOAA puts it, “Each liter of seawater contains, on average, about 13 billionths of a gram of gold.” There are also gold deposits within the seafloor, but profitably mining them is far beyond our current abilities.

Nonetheless, gold is gold, and it has a way of making people believe all sorts of speculative things. Ever since British chemist Edward Sonstadt discovered that there was gold in seawater in 1872, there have been those who have tried to capitalize on it, honestly or not.

The earliest, and largest, attempt to mine the oceans for gold took place in the 1890s. And it was all a hoax. The scam began when New England pastor Prescott Ford Jernegan claimed to have invented a “Gold Accumulator” that could suck gold from seawater via a process involving specially treated mercury and electricity.

Claiming that the inspiration for the contraption had come to him in a heaven-sent fever dream, Jernegan, along with childhood friend Charles Fisher, started the Electrolytic Marine Salts Company. Jernegan performed a seemingly successful demonstration of the accumulator to some potential investors, and they were off and running. An attractive prospectus was drawn up that claimed there was “enough gold in the waters of Long Island Sound to pay off the National Debt and leave a larger gold reserve in the Treasury than the Government has yet possessed.” According to the New England Historical Society, by 1898,Electrolytic Marine Salts had garnered around $1 million in investor cash.

The company opened a gold-extraction plant in remote Lubec, Maine, where their operations would be less likely to be inspected. The operation was to use 1,000 of the accumulators to drag the waters for gold. Excitement about the operation became such that work on a second, larger plant began, with the hopes that Lubec might be turned into a gold-rush boom town.

However, in July of 1898, things fell apart. As the shareholders began wanting a closer look at their investment, both Jernegan and Fisher disappeared. According to The New York Times, Jernegen had recently taken out $80,000 in government bonds. It would come out that during the initial demonstration, Fisher had swum down to the accumulator and replaced the pure mercury with his own gold-laced mixture. The accumulators turned out to be little more than trumped-up soup kettles.

When the hoax was exposed, hundreds who had come to Lubec for work were instantly unemployed, the plant was shut down, and the investors were out of their money. Jernegan fled to Europe with his family, and managed to weasel his way out of jail time, while Fisher was simply never heard from again.

This wide-ranging scam may have dampened the initial enthusiasm about the gold in seawater, but it certainly didn’t stop people from dreaming about it.

In 1900, London inventor Henry Clay Bull filed a patent for a “Method of extracting gold from sea-water,” although it doesn’t seem to have been put to use.

In the 1920s, German chemical-weapons developer and Nobel Prize–winner, Fritz Haber sought to refill Germany’s post-World-War-I coffers by developing a process to take gold from the sea. Haber and a team of scientists spent years trying to perfect a profitable extraction method, involving centrifugal force and electrochemistry, before finally realizing he had made a mistake in his initial calculations that had overestimated the potential yield of gold. The project was abandoned. Haber and his team discovered the one major flaw that has plagued every honest attempt to extract gold from seawater: it costs more to get the gold out than the net gold is even worth.

According to a 1934 article in the Times, an early Dow Chemicals plant on North Carolina’s Kure Beach, which was primarily employed for extracting bromine from seawater, told the American Chemical Society that they would be profitably taking gold from the oceans within a decade. They claimed that, like bromide, which was previously also hard to take from the water, gold (along with silver, radium, and other precious metals) would quickly become an easily separated mineral. In their view, once the “secret” of extracting the gold was discovered, it would be produced as a simple waste product of the bromine extraction process. Unfortunately, the secret was never discovered.

A similar article appeared in the Times in 1941, stating that Columbia professor Colin Fink had developed a method to take gold from seawater as part of the bromide-extraction process. He even filed for a patent for his process in 1942. Once again, this optimism proved unfounded. The article also mentioned that Willard Dow, of Dow Chemicals, had given up his quest for sea gold “after having recovered no more than a pinhead of gold from a ton of seawater.”

As chemical analysis processes improved throughout the 20th century, the minuscule amount of gold in seawater was more accurately determined, and dreams of taking out enough to get rich dwindled. In 1990, New Scientist shared a study that determined that the Atlantic and Pacific oceans contained “1 gram of gold for every 100 million tonnes of sea water.”

Still there are those that are still trying to make the most of this seeming treasure trove. A 2002 article in The Hindu claimed that Indian scientist Joy Prakash Agarwala had developed a new method for extracting gold as a chemical process, although this doesn’t seem to have turned into a font of wealth either.

Maybe the most famous modern case of someone claiming to get gold from the sea is that of biomedical engineer and inventor Mark Sullivan, who developed an engine that claimed to use the planet’s Coriolis Effect to produce energy. As a byproduct, his oceanic turbines would end up filtering gold from the seawater. Sullivan’s invention gained a fair bit of notoriety when he took it on the popular show Shark Tank in 2012 looking for funding. The investors on the show weren’t interested in his generator, but he earned a reputation as a bit of an eccentric inventor, bringing the concept of mining sea gold to modern eyes of a mass audience.

To his credit, Sullivan says that his intention for his generator was never to mine the oceans for gold, but to create clean energy. “My motivation is to help people,” he says. The gold just happens to be an enticing natural side effect. To date an operational Sullivan Generator has yet to be implemented, because as Sullivan told us, “it may be 20 years ahead of its time.” He says his next major energy project will seek to harness the power of gravitons.

Given our modern understanding of the difficulties surrounding taking gold from seawater, there is still a surprisingly high amount of scammers trying to trick people into thinking it’s a reality. Although looking on gold refining forums, you can still find evidence of people trying to suggest that they’ve developed some secret method.

The century-old quest for the ocean’s gold might seem like a fool’s errand, but the fact remains that seawater is laden with one of our most valuable minerals. It’s not impossible that one day in the future, scientists will develop a way to reach into the water and come out holding a handful of gold. It just might take a lot of time and effort.

Sea burial is a way to save space in a dense city, but runs counter to funeral traditions.
maps

The Mysterious Connection Between Solar Storms and Stranded Whales

Could cosmic events be leading sperm whales to their deaths?
Want to see fewer ads? Become a Member.
From Around the Web
THE GASTRO OBSCURA BOOK
Taste the World!
An eye-opening journey through the history, culture, and places of the culinary world. Order Now