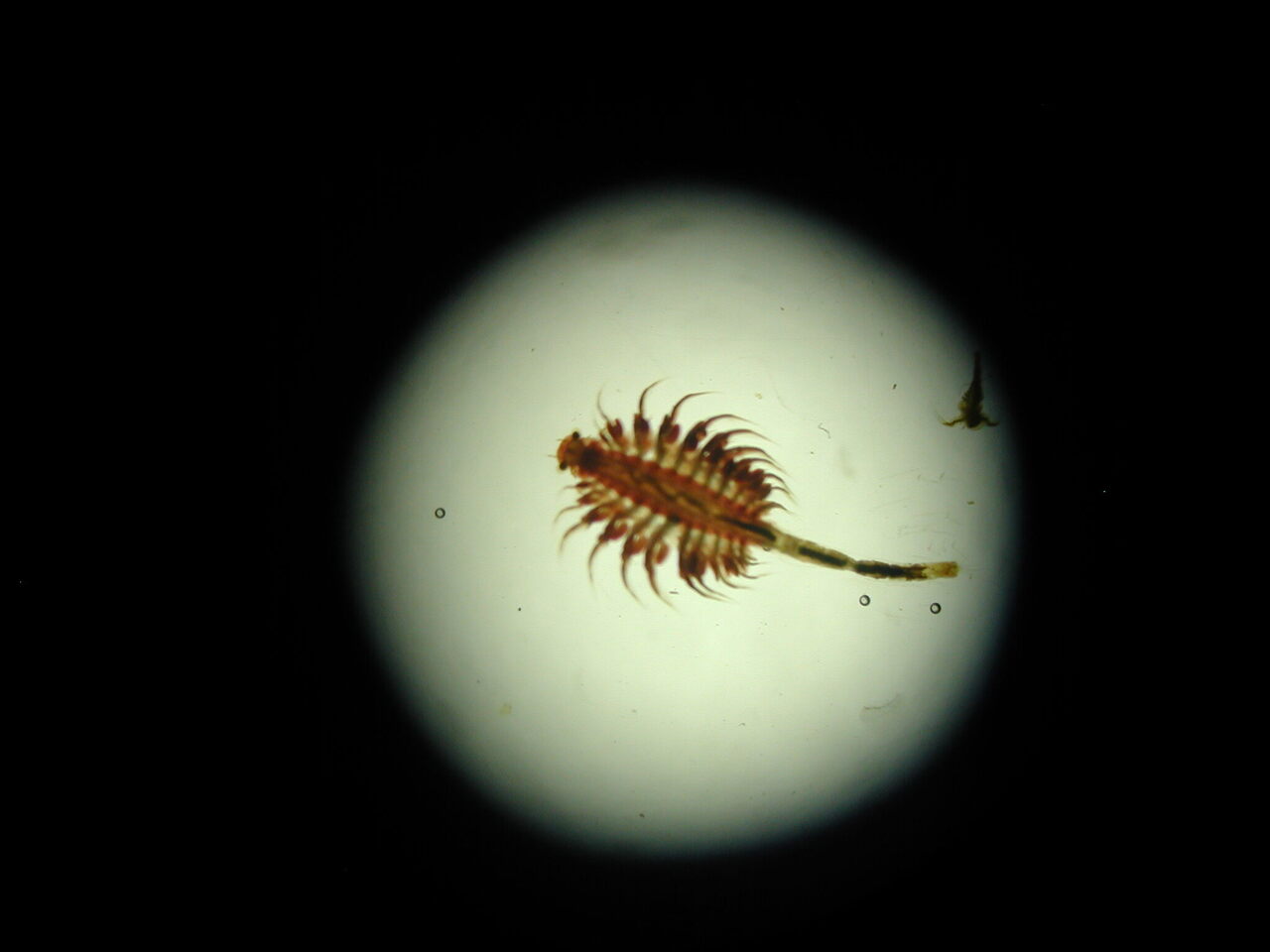 Adult brine shrimp can reach half an inch long when fully grown. Courtesy Utah Division of Wildlife Resources
In This Story
Place

The largest island on the great salt lake is home to curious creatures and strange stories.
Destination Guide

When Kyle Stone tries to explain his work, he sometimes compares it to keeping track of cows in a field. His job is to make sure there are enough cows in the pasture to keep it from getting overgrown, but not too many, so there’s enough grass to go around.

Except his cows are tiny aquatic creatures called brine shrimp, they eat algae instead of grass, and there are about 17 trillion of them.

The brine shrimp are grazing crustaceans, surviving on a diet of algae that grows in Utah’s Great Salt Lake. They reproduce by laying hardy eggs called cysts, which survive over the winter and hatch each spring to restart the population. Brine shrimp cysts have been harvested there for decades—it’s a $67 million-a-year industry that supplies food for fish farms around the world—and since 1992, the brine shrimp population in the lake has been closely monitored and managed by Utah’s Division of Wildlife Resources. Scientists are watching closely, as the future of the brine shrimp, and the lake overall, is uncertain, with climate change and water use threatening the lake’s very existence.

At least every two weeks, and more often during harvesting season, Stone and a few other aquatic biologists pile into their monitoring boat, start up twin outboard motors, pull out from the marina at the south tip of the lake, and spend a day motoring around a 120-mile loop. “We start our run, leave the marina and head out to the first test site. Then we just repeat the same thing 17 times,” says Stone, a wildlife biologist with the Great Salt Lake Ecosystem Program in the state’s Division of Wildlife Resources.

At each sampling site they drop anchor and measure water temperature, visibility, and salt levels. Then they drop a net, a few feet across, all the way down to the bottom of the lake and then haul it back up—a slice of the life. The chosen column of water passes through the net, leaving behind any brine shrimp or cysts floating around.

The scientists filter their finds into a small jar that they’ll examine back in the lab. They use the number of brine shrimp in each slice to estimate the total population across the whole lake, or at least the section where the brine shrimp live.

The Great Salt Lake is the largest natural lake west of the Mississippi River, measuring about 75 miles long by 35 miles wide. As its name suggests, it’s saline. Very saline. Gilbert Bay, the south arm of the lake where most of the brine shrimp live, is about four times saltier than seawater.

In the winter months, from around October through February, it’s too cold for live brine shrimp, so the monitoring team pretty much only sees cysts, when they can make it out to measure at all. Cold air descends into the valley, and the saltwater easily kicks up into whitecaps, making sampling on even slightly windy days a turbulent prospect.

When the team does get out onto the lake in the winter, they wear orange survival suits, like the ones donned by Alaskan crab fishermen, and insulated rubber gloves.

The high salt level keeps the whole lake from freezing over, but sometimes the fresh water flowing into the lake floats on top and creates giant ice sheets, up to several miles across: another hazard to be slowly plowed through or avoided entirely.

The cysts they’re collecting are basically in hibernation for the frigid winter months. This hardy adaptation is key to the species’ survival, as well as the brine shrimp industry’s economic success. Cysts can withstand extreme temperatures, high pressures, and completely drying out. (They’ve even survived trips to space.)

Those who actually harvest brine shrimp also brave the frigid temperatures. They scoop the dormant cysts out of the water, either from a boat or the shore, separate them from other debris, then dry them and package them up. The cysts are destined to for the bellies of farm-raised fish. They’re perfect for that purpose. First, they can survive everything the supply chain throws at them. Then, upon arrival, add water and get live, wriggling fish food. It’s the same magic that made brine shrimp famous as novelty pets—they’ve been sold as Sea Monkeys since the 1950s.

The biologists with the Department of Natural Resources conduct the monitoring year-round to ensure the continued health of the brine shrimp population, with the most important measurements in the winter to keep tabs on the harvest.

The goal is to stop the harvest once levels drop to 21 cysts per liter of water. That number comes from research by biologist Gary Belovsky, who developed a model in the 1990s to estimate how many cysts were needed to restart a thriving brine shrimp population each spring. Based on this metric, the harvest season might shrink or grow. The year 2021 saw an especially high number of cysts, and the harvest was extended through February, according to John Luft, the head of the Great Salt Lake Ecosystem Program.

Come March, once the water warms up enough, the remaining cysts hatch into tiny juvenile brine shrimp. Soon after, adults can be found in huge numbers. Adult brine shrimp top out at about half an inch long. And at the height of the season, there are more than 17 trillion adult brine shrimp in the lake. Luft once calculated that together, all the shrimp in the lake can weigh as much as 13,000 bull African elephants, or about 1.3 million people—slightly more than the population of the Salt Lake City metropolitan region.

Thousands of years ago, Salt Lake City and the surrounding region used to all be underwater. The salt lake is the surviving relic of Lake Bonneville, which encompassed most of the western half of Utah. Over the past 15,000 years it dried up and contracted to its current state.

“You can see the geologic history. It’s so obvious in the area, all the different lake levels are all embedded into the sides of the mountains, you can see how enormous the lake was and is,” says Jim Van Leeuwen, an ecosystem biologist with the Great Salt Lake Ecosystem Program.

And today the lake is still shrinking, precipitously so in the last decade because of water demands in the area. According to a September 2020 report, the water level in the Great Salt Lake has dropped 11 feet in the past decade. Drought conditions have resulted in the diversion of the rivers that feed into the lake to meet the water needs of a growing human population. This is about as low as the lake has ever been, and if the trend continues, the lake could lose another 11 feet in the next decade.

Each foot the lake drops translates to miles of shoreline lost. “Think of it as a giant dinner plate,” says Van Leeuwen. “It’s big and wide, but it’s not very deep.” And there are major consequences in store for the brine shrimp. The 17 sites the team regularly visits to track them was 21 two decades ago. Four of the original sites are now dry land.

The marina the team currently launches the boat from is in jeopardy, too. It was already a concession to the receding lake—30 miles farther from their office than the one they used before 2008. “This is our breaking point, really,” says Van Leeuwen. “If we don’t get a wet spring this year, we’re going to be down to one functional boat harbor.”

The possible future of the Great Salt Lake can be seen in the Aral Sea in Kazakhstan and Uzbekistan (a desert swirling with toxic dust), Lake Urmia in Iran, and California’s Mono Lake. Local officials, hoping to avoid this fate, are devising water management strategies to keep the lake filled and the brine shrimp swimming.

Solutions might lie way upstream, but as long as there’s water in the lake and a way to launch the boat, the biologists and shrimp harvesters will be out, counting brine shrimp and collecting cysts.

In Ancient Georgia, Spring Arrived With Wine, Whips, and Mud

Ships, farms, and hotels were left high and dry when 90 percent of the water disappeared.
lakes

The mineral mirabilite is the key.
mines

Yuncheng Lake is one of the country's oldest salt-production sites.
Video • PinDrop

1:18
Want to see fewer ads? Become a Member.
From Around the Web
Related

Everything looks cool from the International Space Station.
Read more
Thanks for sharing!