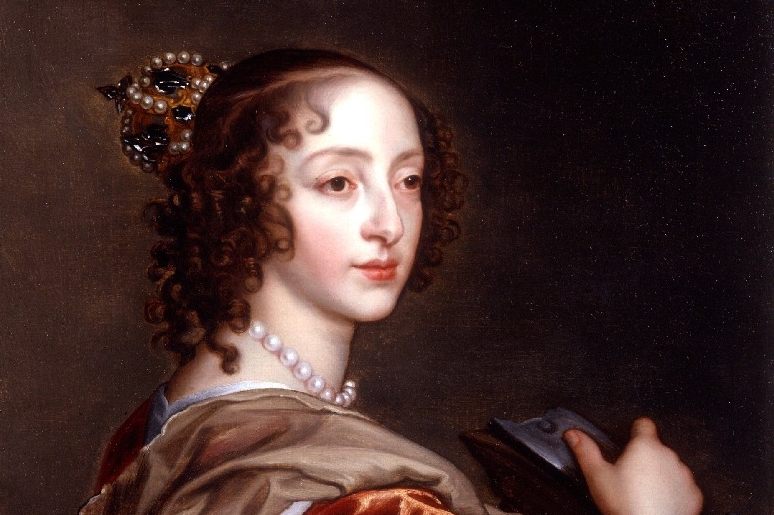 Queen Henrietta Maria of England was shot at, won battles, and raised an army on behalf of her husband, King Charles I. But history has remembered her only as a villain. Portrait circa 1639 by Anthony van Dyck. Public Domain/Flickr
In This Story
Destination Guide

Around midday on July 4, 1643, in the countryside just north of Birmingham, Queen Henrietta Maria was in her battle tent. Outside, shells exploded. Musket balls* zoomed past. Anxiously, the Queen of England waited. Taking Burton-Upon-Trent, a strategic town with a river crossing connecting northern and southern England, was her army’s first real challenge. Defeat was not an option. But the fighting had already raged for five hours—how much longer would it take to deliver a victory? Three hours later, the queen got her answer. Her royalist army had finally broken through the town’s defenses. Victory was secured.

Eighteen years earlier, the queen had arrived on English shores as a 15-year-old French bride. And now, at 34, she was a warrior queen. The queen would jokingly call herself “she-majesty generalissima.” Lines from a contemporary poem, its author unknown, portrayed her as not just defeating but unmanning Parliament’s forces, literally: “Tis here a woman leads; but one would swear, the armies did consist of women there.” Her skill garnered wide respect from diplomatic elites; the Venetian ambassador observed, “Without [the queen’s] encouragement and aid the king would never have put himself into a position to resist.” During the English Civil War, Queen Henrietta Maria was, it seems, all that stood between King Charles’s sure defeat at the hands of Parliament.

But despite all her prowess, history remembers Henrietta Maria as an evil seductress, who inspired Charles to war. Historian Leanda de Lisle’s new biography Henrietta Maria: The Warrior Queen Who Divided a Nation retells the formidable queen’s story. Atlas Obscura spoke with de Lisle about how the queen dodged enemy projectiles*, her self-deprecating sense of humor, and why history has maligned the fierce English monarch.

What was it like to be a lady at court in the 17th century?

Women were peacemakers, unifiers, helpers to their husbands. But women have never entirely held to the rules expected of them. And at Charles’s court and certainly in France, there were powerful women who were networkers and who could facilitate introductions and so forth with powerful men. And so, they did wield considerable power.

How has history remembered Henrietta Maria?

All the usual tropes directed against women that date back to the story of Eve have been used against her. She is silly and frivolous. She’s weak. She’s superficially attractive, like Eve was, and so able to seduce King Charles I into evil. And that evil supposedly is two levels—one that she makes him Catholic, which is completely untrue, and also that she encourages his authoritarianism, which is also completely untrue.

Henrietta loved amusing company. She liked witty people. She was very funny. She had a great sense of humor and was full of joie de vivre. She would have been very amusing company, self-deprecating. She could tease people, and she didn’t lose her sense of humor. Even under the most terrible of circumstances, she would crack jokes.

For example, there was one occasion during the English Civil War when she set out from Holland on a ship with her ladies. And this terrible storm went on for days and days. Ships sank. People died. She and her ladies-in-waiting confessed their sins out loud because they thought they were going to die. But they didn’t die. Other ships did sink. Theirs didn’t. They staggered back to Holland, covered in vomit. Their dresses had to be burned. But Henrietta Maria then began to tease her ladies about what they’d confessed. She said, “Oh, do you remember you said this!?” She had a sort of naughty sense of humor like that.

How did she become a warrior queen? What was her role in the English Civil War?

She didn’t really get involved in English politics initially. But, as things got nearer to the Civil War, she realized that her husband was managing things incredibly badly. Parliament had most of the men, most of the money, and most of the weapons in England. And so, she had to step up to the plate to help him.

​​So she went to Holland, ostensibly to accompany her daughter who was marrying Holland’s heir, and she raised money. She raised arms. She raised men. And when everyone expected Charles to lose the first great battle of the Civil War, he didn’t. And the reason he didn’t was largely because of the work that she had done in Holland.

How involved in the war was she?

Parliament tried very hard to kill her because they realized that she was a great help to Charles. When she landed in Yorkshire after leaving Holland, parliamentary spies discovered the cottage that she was staying in overnight. They got their ship into the harbor and shelled her cottage. She fled with her little toy dog under her arm, Mitte, to a ditch with her ladies and others. There are very vivid descriptions of musket balls* pinging the Earth. You can just see the dirt getting into their hair as the shells hit. A sergeant was blown to pieces just yards from her.

But she and her army had tremendous success. When Charles ordered her south, she took Burton-on-Trent on her way. She was directly involved in negotiating with parliamentary commanders who turned coat. She gained the Port of Scarborough that way. She sat on the councils of war in the North and expressed her views. She rode with her army. She came very close to helping Charles win the Civil War.

Why is it important to tell Henrietta’s story?

Well it’s a cracking good story for one and it’s also an important story. It shows how history can be twisted and perverted, and how easy it is to do.

How did you unravel Henrietta Maria’s story?

You do need to go back to what was written at the time. You need to try to understand the culture of the time. And you need to know what axe people had to grind so that you can separate truth from fiction. Many historians will just write what has already been written. They will follow the person before. And they will literally goldplate their prejudices. They will look for things that reinforce ideas they already hold. Take quotes out of context.

How does unraveling female stories, like Henrietta Maria’s, help tell a better history?

It’s a matter of looking for the truth. By including women in the story, one can get something nearer to a true picture of what happened.

From California’s mythic warrior queen to the swole women of Sparta to female hunters in ancient Peru.
politics

Perhaps fiercest of all was Manuela Sáenz—spy, archivist, prankster, and companion of Simón Bolívar.
Video