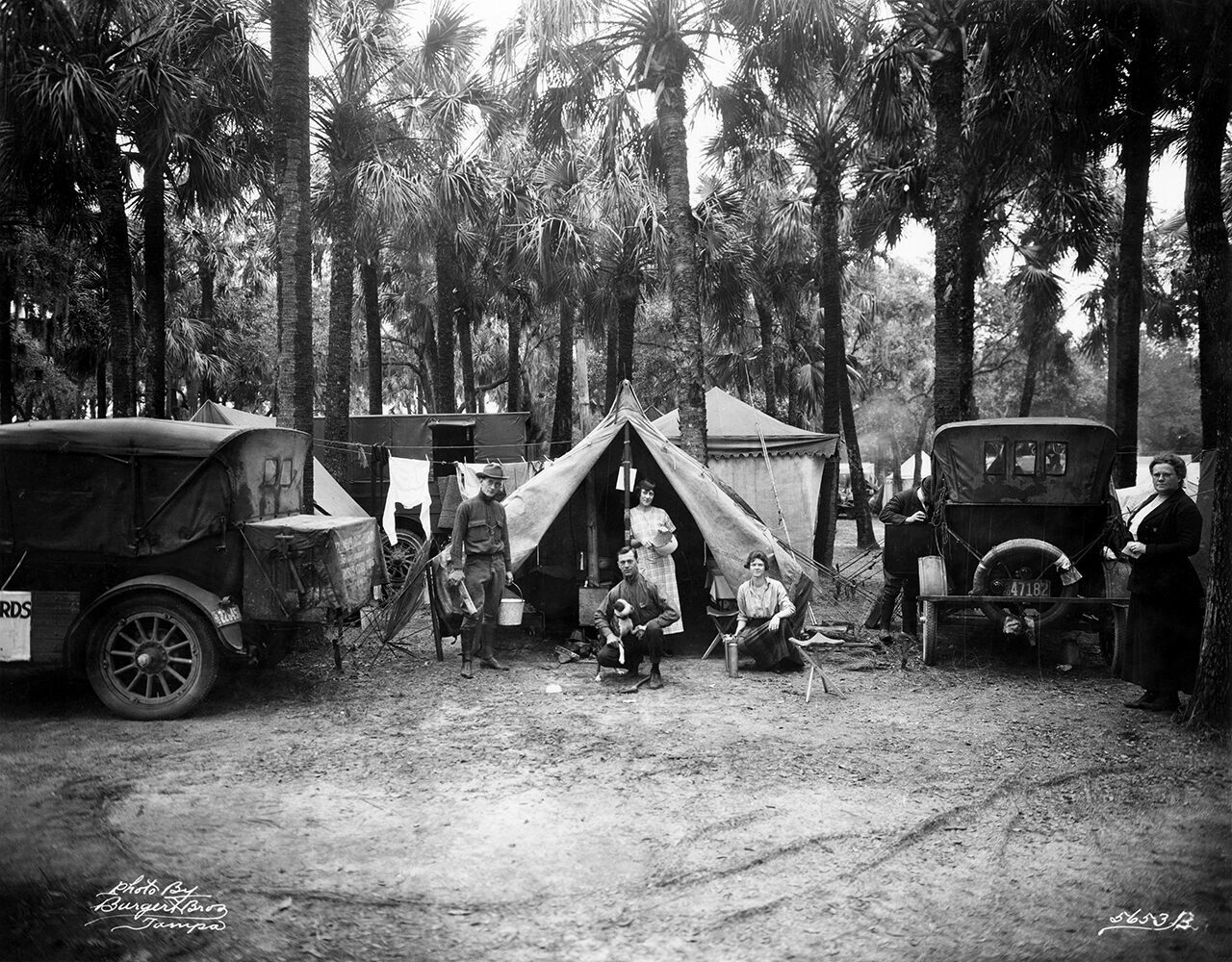 Early RV campers pose for a photo on Christmas Day, 1920, in Desoto Park, Florida—about a year after the first Tin Can Tourists’ assembly. The group’s ethos—an incongruous mixture of escapism and orderliness—inspired American auto campers to load up their Model Ts and drive along freshly paved roads, searching for scenic spots to camp. State Archives of Florida, Florida Memory

MR. LANDLORD HAS NOTHING ON US” begins a poem printed on a small Curt Teich postcard from 1921. Above the passage’s 13 lines—which call for “Alligator shooting” and “Razor-backs rooting”—a colorized photograph shows a shaggy outdoorsman posing in an overgrown Florida campsite, surrounded by oak trees dripping with Spanish moss.

It’s a dead-on depiction of the card’s subject: the Tin Can Tourists, a group whose DIY naturalist spirit paved the way for today’s RV campers.

Equal parts car club and camping collective, the Tin Can Tourists of the early 20th century were a membership organization based around camper travel in its incipiency—a sort of fraternity for nomads looking for a life in permanent transit. Their earliest organized meeting was in 1919 in Tampa’s Desoto Park (unintentionally establishing Florida as the perennial RV vacation spot for years to come). That’s where 22 campers driving their “tin lizzies” worked to establish a culture of order and high moral values while retaining a sense of freedom behind the wheels of their tricked-out Model Ts.

The group’s goal was to “unite fraternally all autocampers,” and its word-of-mouth marketing led to a rapid growth in membership and annual events in the 1920s and ’30s. Gatherings were held in state and local parks from Florida to Michigan (and occasionally at the base of the Washington Monument in D.C.). Attendees numbered in the thousands, and as more American workers lost their jobs during the Great Depression, there was more time to attend Tin Can Tourist conventions around the eastern U.S. According to news reports, the club counted 150,000 members by the mid-1930s.

The Tin Can Tourists hit their stride during this period thanks to highway improvements across the U.S.—a precursor to the Interstate Highway System, authorized in 1956 by President Eisenhower—and affordable, mass-produced vehicles (between 1908 and 1927, Ford built some 15 million Model Ts). Families found an affordable new way to travel and camp overnight, while other enthusiasts found a new hobby: redesigning cars to suit campers’ needs. Many of the group’s annual conventions—most took place in Florida, though Michigan and other states played host as well—doubled as expositions for displaying cars modified to carry kitchen equipment, barrels of water, and, in some cases, all the luxuries of a family home.

With the onset of World War II, however, the group’s decline seemed inevitable. As a national war-first mentality took hold and rationing began in earnest, Tin Can Tourist membership dwindled. (According to a LIFE magazine article, attendance at an annual meeting in 1936 was over 1,500. By 1939, a mere 645 campers showed up for the same event.) At the same time, campers’ tastes were migrating toward spiffier mobile offerings, factory-designed for car camping.

Yet the Tin Can Tourists remain influential today—a group whose humble beginnings as a gathering of virtuous vagabonds managed to pioneer recreational mainstays such as group camping, summer trips to Florida, and modern-day RVing.

The archival photographs below capture the group’s heyday in encampments throughout the U.S.—barbecues, campground games, and all—and attest to their long-lasting influence on America’s holiday roads.

The World's First Piranha Ramen Is No Joke

It did start as one, though.
automotive historyamericanahistory

Half a century of menus, matchboxes, and postcards finds a home.
military history

On the Hunt for National Treasures With America’s Archive Detective

Mitch Yockelson scours the country for its missing heritage.
food

Often, they traveled by rail and were built that way too.
food

The Rise and Fall of the Hormel Girls, Who Sold America on SPAM