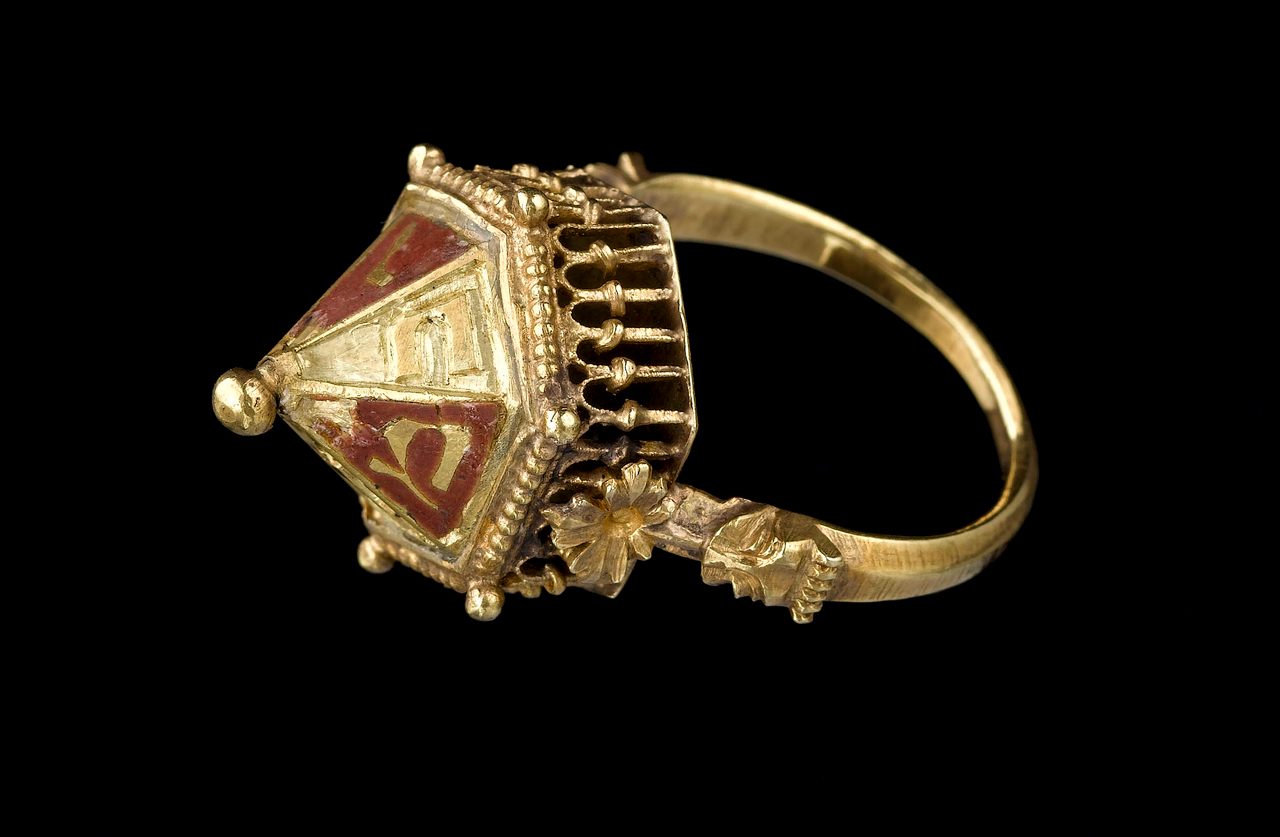 The ceremonial wedding ring found in the wall of a confectionary shop in Alsace. Courtesy The Metropolitan Museum of Art

In 1863, a mysterious terracotta pot was discovered in the wall of a French sweet shop. Handymen stumbled upon it while renovating the building in Colmar, a commune in the riparian region of Alsace. Upon closer inspection, this proved to be no ordinary piece of pottery. The pot held a collection of medieval treasures: 384 silver coins and 14 gold and gem-encrusted rings, to be exact.

Now these precious items, which date to around the year 1300, are on display at The Met Cloisters in New York City, on loan from Paris’s Musée de Cluny. One artifact in particular—a ceremonial wedding ring—is giving art historians insight into who owned the treasure chest and why it was concealed.

Made of gold and decorated with colored enamel, the wedding ring is the most ornate and skillfully constructed piece in the collection. When it was discovered in the 19th century, after having been hidden for 500 years, it was still in good condition.

“Even when buried, gold retains its luster—unlike silver or copper, for example,” says Barbara Drake Boehm, curator of the exhibition. However, “it has lost its green translucent enamel, which [was paired]with the red enamel that remains.”

A clue found in the goldsmith’s handiwork reveals that this ring was made specifically to celebrate a Jewish union. Its centerpiece is a structure that looks similar to the lost temple of Jerusalem, and it features Hebrew letters that spell out “Mazel Tov,” or “Congratulations.”

“Fourteenth-century Jews in Colmar were citizens of the Holy Roman Empire,” says Boehm, “and until the Black Death broke out, theirs was a thriving community. The treasure was found on the ‘Rue des juifs,’ or ‘Street of the Jews’—an area where Jews and Christians had lived alongside one another for close to a century.”

At the time, Colmar’s Jewish and Christian populations not only lived in harmony; they also shared the same class status and held similar tastes. Boehm says that jewelry similar to the pieces found in this Jewish family’s treasure chest is described in the wills of Christian families too.

“Judging from the size and contents, I believe the treasure belonged to one Jewish family of the merchant class,” says Boehm. “There’s the tiniest whisper as to who the owner was [hidden in the ring]: A belt in the treasure bears a small inscription that reads ‘ANCH,’ which might be the medieval equivalent of ‘Annie.’ So maybe this is ‘Annie’s’ family’s treasure.”

The bubonic plague devastated Europe in the middle of the 14th century, and more than half of the Holy Roman Empire’s Jewish population died between 1348 and 1351. Colmar’s Jewish community’s synagogue, mikveh (ritual bath), and school were demolished.

“It had long been thought that the treasure was the only legacy of the medieval Jewish community of Colmar,” says Boehm. The family in possession of these coins and jewels may have hidden the pot in a wall as racial tensions rose with the onset of the pandemic. Or simply because that was the wisest place to sequester family valuables.

Recently, Judith Kogel of the French National Centre for Scientific Research in Paris has begun reconstructing the library that belonged to the Jews of Colmar, after discovering illustrated Hebrew manuscripts and prayer books in the region. Centuries after they were written, these pieces of literature—now coupled with one medieval family’s personal jewels—are finally starting to tell the story of Colmar’s Jewish community and its long-obscured history.

The pandemic layover and their eventual return home is a new chapter in a long history.
paintings

Glimpses of a master revising, changing, and editing.
paintings

Rugged mountains and peaceful streams were hidden under layers of brown paint.
Want to see fewer ads? Become a Member.
From Around the Web
THE GASTRO OBSCURA BOOK
Taste the World!
An eye-opening journey through the history, culture, and places of the culinary world. Order Now