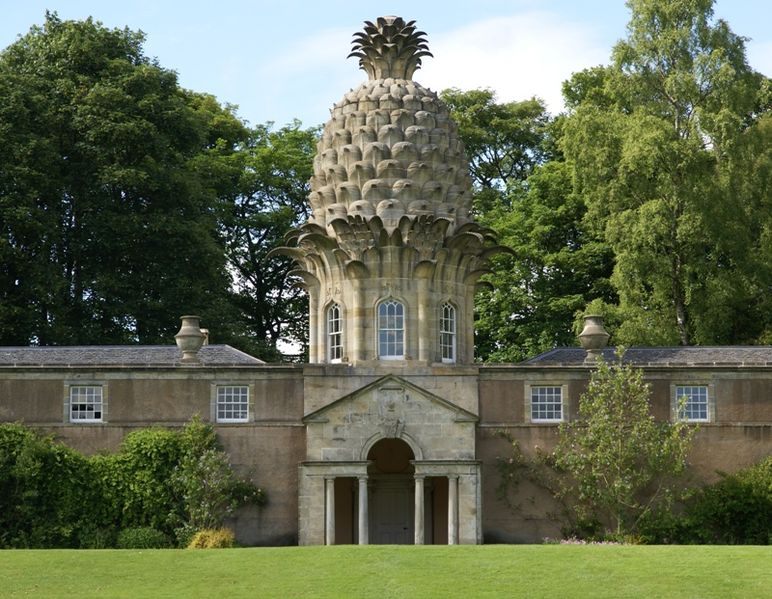 One of the grander uses of a pineapple motif, at Dunmore House in Scotland. Otter / Wikimedia Commons (CC BY-SA 3.0)

If you were a rich 1700s nobleman, had a dinner table, and wanted to impress your fellow gentry, a pineapple would sure as hell be the way to go.

Indeed, if you find yourself at an old inn or perhaps even a new, trendy hotel today, there will likely be a picture of a pineapple somewhere near you. It is a near-universal symbol of hospitality. But why? Thanks to centuries of pillaging and colonizing, the pineapple has traveled far and wide and come to represent something more than tasty fruit. But beyond merely being a symbol of welcoming, it has dark imperial roots to show.

Up until the 15th century, pineapples were unknown in the Western world. In South American countries like Brazil, they were grown and enjoyed by the locals, but few others outside these countries were aware of the pineapple’s existence. Historical accounts claim that Christopher Columbus was the first European to come face to face with the fruit during his second voyage in 1493, when he and his crew found a Caribbean village that ate pineapple. They tried it and reportedly liked it quite a bit, deciding to bring it back to their European home.

The very concept of pineapples equating to hospitality, in fact, comes from these Caribbean trips, according to the World Encyclopedia of Food. Imperial travelers who went to these remote islands discovered that natives who hung the fruit in front of their entrances were welcoming to strangers.

Thanks to their presence in front of villages and local huts, pineapples became widely considered a symbol of hospitality among the gentry in Europe. The concept traveled to America, too, where colonial houses often had the pineapple’s image in common areas. Southern plantations took up the trend and started carving pineapple-like shapes into columns at their entrances. This, in fact, became a well-known addition to entrance architecture.

The European bastardization of the pineapple symbol, however, meant more than just hospitality—it meant prestige. The richest of the rich bought these fruits—however expensive—to show off. Since the fruit was delivered by rare shipments between the continents, supply would often be scarce. This led to a brand new pineapple rental market taking the European gentry by storm, writes historian Mary V. Thompson. Until, by the 1700s, Europeans started growing them in their own hothouses.

Still, pineapples were considered an extravagance. In America, one pineapple could be sold for as much as $8,000 in today’s dollars, according to Mental Floss. Back in Europe a pineapple’s value could reach £5,000 in today’s pounds. It’s no surprise that during the Napoleonic Era, political cartoonists would put pineapples in to represent extravagance.

Pineapples remain a mainstay in the hospitality industry. The very first words of the hospitality handbook Welcome to Hospitality: An Introduction published in 2009 claims that the “universal symbol for hospitality is the pineapple.” But pineapple is no longer a rarity.

When the supply of the fruit became more abundant, more people began adopting its aesthetic. Sailors, for instance, would bring the fruit home from their travels and place them on their home’s gate posts as a sign of welcoming. This, writes historian Nicola Cornick, led to the pineapple signifying not the wealth and extravagance it long did, bot that original “sense of welcome, good cheer, warmth and celebration.”

The next time you take a bite out of the fruit, think of its imperial past. Once a treat for the rich—one which a Royal botanist described as “being so sweete in smell… tasting… as if Wine, Rosewater and Sugar were mixed together” in 1640—has become something more common and truly hospitable.

Restoring the grounds and its rare, heirloom crops recreated what was effectively the country's first seed bank.
architecture

Ancient sites such as Nan Madol, the "Venice of the Pacific," may need to be reconsidered thanks to new evidence about sea level change.
culture

“I see the collection as a tool for uncovering what is already there."
Video • Object of Intrigue