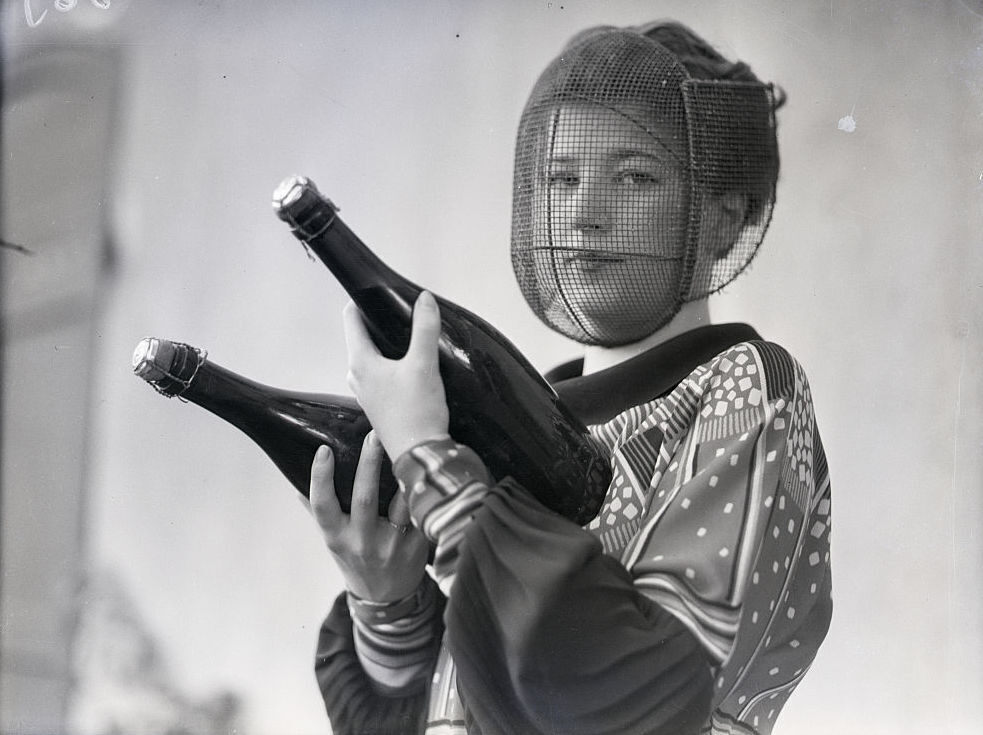 This Champagne inspector wears a mask to protect her face from shattering bottles. Bettmann/Getty Images
In This Story
Destination Guide

In the early 17th century, the kingdom of England was in the grip of the world’s first energy crisis. Decades of population growth, rapid urbanization, countless foreign wars, and myriad voyages of discovery to the New World under the capricious Tudors decimated the country’s forests and its timber supply.

King James I was terrified. No trees for timber meant no ships for the navy, and no navy meant leaving the country wide open and undefended against England’s enemies—which, at this time, was pretty much all of the rest of Europe. This lack of timber was nothing short of an existential threat to England itself.

A panicked Royal proclamation was swiftly issued in 1615 to stem the tide. It bemoaned the increasing dearth of good old English wood, “great and large in height and bulk” with “toughness and heart,” which is “of excellent use for shipping,” and it set out a series of drastic restrictions for its use for anything but absolutely essential purposes. In particular, the proclamation explicitly forbade that anyone should be so wasteful as to “melt, make or causeth to be melted or made, any kind, form or fashion of Glass or Glasses whatsoever, with Timber, or wood, or any Fewell made of Timber of wood.”

No timber as fuel to make glass? The country’s glass-makers were outraged. They had been burning timber for centuries to make their product: an almost alchemical process of using fearsome heat to melt a mixture of potash and sand. What on earth were they to do now?

While craftsmen around the country were up in arms about this new prohibition, the attentions of the London upper class were engrossed with a decadent new product.

English wine has long been maligned. The ancient historian Tacitus wrote that Britain was “hostile and unsuitable for the growing of grapes,” but it was his fellow Romans who brought their vines to Britain two millennia ago to sustain them in their drafty villas. A thousand years later, the Domesday Book listed 45 working vineyards in the country. And, in the 1600s, a new type of wine was being produced on the shores of England: refined and unique in character, to cater to the tastes of the affluent and upwardly mobile individuals who had flocked to the capital. And, for that, we turn to Christopher Merrett.

Sir Christopher Merrett was possessed by an insatiable curiosity. A librarian, gentleman scholar, physician, and, in the terminology of the time, a “natural philosopher,” Merrett was one of the founding members of the Royal Society: the “invisible college” where the greatest minds of the age investigated the minutiae of the known world. His output was extraordinary. He even produced an exhaustively comprehensive book attempting to list all the fauna, flora, and minerals of England.

But it’s his 1662 paper, Some Observations Concerning the Ordering of Wines, that has had the longest legacy. “Our Wine-coopers of latter times use vast quantities of Sugar and Melosses to all sorts of Wines,” he wrote, “to make them drink brisk and sparkling and to give them Spirits.”

What Merrett was describing was the méthode champenoise, the act of secondary fermentation where still table wines are loaded up with sugar and molasses to get the yeast going again, then sealed in a bottle to produce an effervescent, bubbling concoction. It is a method made famous, as the name suggests, by the French in the Champagne region. But here is the first known description of making “sparkling” wine⁠—and Merrett writing that British vintners had been doing this for years.

The problem with this new liquid, “brisk with spirits,” was that it generated an incredible amount of pressure. In a standard bottle of sparkling wine today, the internal pressure is at around six times that of atmospheric pressure—three times that of a car tire. That’s the equivalent to more than five kilograms of weight pushing hard against every square centimeter of glass. Only an especially strong bottle could withstand this sort of pressure. Thankfully, England’s glass-makers were prepared.

After the royal proclamation a few years before, English glass-makers had reluctantly turned to coal. While wood was thought of as a noble fuel, across Europe coal was historically considered undesirable and dirty, and the act itself of mining it had been likened to vandalism or burglary from the earth ever since Roman times. Even though it was well known that rich seams of coal ran across England, these were left largely untouched for centuries.

Nonetheless, once laborers started begrudgingly using this coal to heat their furnaces, they overcame their reservations. Sure, coal gave off fumes and toxins, but it also reached a much higher temperature than timber, creating stronger, more durable, and thicker glass. Over time, artisans honed new industrial methods to take advantage of this discovery. While European counterparts were still using wood, the Champagne bottle as we know it was born in the furnaces of England.

Not only did these new bottles help spawn an embryonic wine industry, but they became status objects themselves. Samuel Pepys, in his Diaries, writes excitedly about visiting his local vintner to see “some of my new bottles made, with my crest upon them, filled with wine, about five or six dozen.” The introduction of lead oxide later in the century made the bottles even stronger, and catapulted England’s craftsman to the pinnacle of European glass-makers.

But what of Dom Pérignon⁠—the French Benedictine monk who, as the story goes, first created this beverage that would become known around the world as Champagne? “Come quickly, I am tasting the stars!” he is said to have cried out. One can imagine the other monks rushing over to make merry with this novel and effervescent liquid that had just burst from its bottle.

But that thick, stout bottle⁠—the one memorialized in a grand statue of Dom Pérignon that now stands on the lawn at the House of Moet & Chandon on the Avenue de Champagne⁠—could not have existed anywhere but Britain at the time. And, what’s more, Merrett’s paper on the secondary fermentation of wine was submitted to the Royal Academy in 1663, five years before Dom Pérignon even arrived at the abbey in which his famous invention was said to have been born. And decades before the famous saying could have been uttered.

The founding myth of Dom Pérignon has played a vital part in transforming Champagne into one of the richest and most fiercely protected global food and drink regions. It is a convenient, if apocryphal, first-to-market story that has successfully given authority to the Champagne region over every other wine producing area. It was actually the infamous English sweet-tooth and the Londoner’s predilection for bubbles that first gave the wine-makers of Champagne inspiration; they just needed to work out how to create the right sort of bottle, like that of their cross-Channel cousins, in order to capitalize on the new potential market.

This, however, took some time. Replacing wood with coal in the bottle-making process was not adopted in France until after 1700, to imitate and reproduce bottles à la façon d’Angleterre (“in the English fashion”). But change was so gradual that, as late as 1784, French entrepreneurs were after the industrial “secret” of English bottle-making. And still, in 1833, when Cyrus Redding published his A History and Description of Modern Wines, anywhere between four to 40 percent of the Champagne region’s wine was lost to exploding bottles every year. The bodily danger was so great, Redding wrote, that “workmen [were] obliged to enter the cellars with wire masks, to guard against the fragments of glass when the breakage is frequent.”

It was not until the Industrial Revolution reached France that bottles could be produced with enough precision and standardization to withstand the pressure. By then, Champagne’s reputation was assured. For that, we have to thank both the English bottle and the world’s first energy crisis.

The wealthy once labeled their ketchup, soy sauce, and champagne with style.
food

Every Year, This Italian Town Hand-Delivers Salt to the Pope

Browned and splattered, a set of recipe cards owned by the Pulitzer Prize-winning poet raised a lot of dough.
Video

Historic cuisine meets fine dining in a hotel-restaurant overlooking Hyde Park.
Want to see fewer ads? Become a Member.
From Around the Web
Atlas Obscura Trips
Legends and Lore of Dartmoor, England
View This Trip
Thanks for sharing!