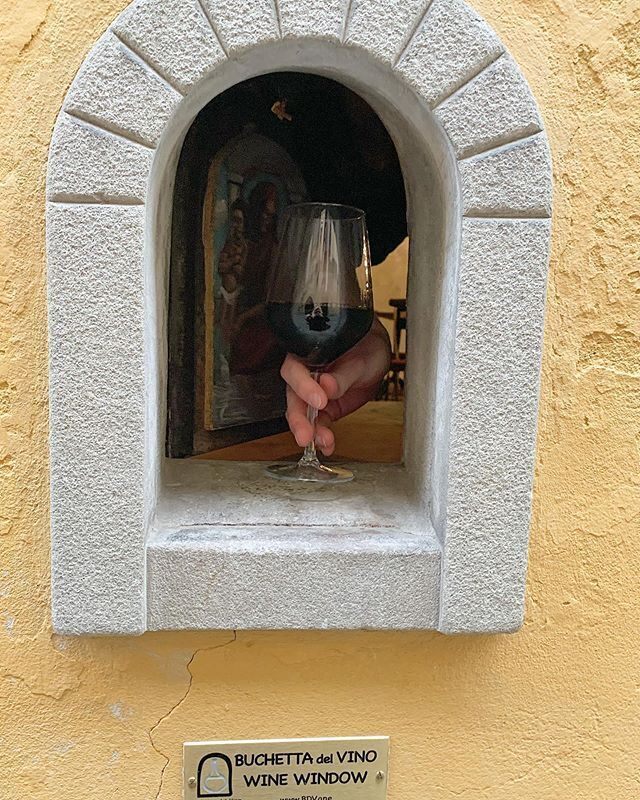 Babae’s wine window was the first of Florence's put into use—even before the pandemic. Courtesy of avalon.sawer
In This Story
Place

Drink wine handed out through a window as part of an age-old tradition.
Destination Guide

We’ve learned over the past months that a global pandemic can halt even the most mundane routines. A handful of restaurateurs in Florence, however, are determined to satisfy locals’ taste for wine unimpeded, and they’re turning to a long-forgotten method to do so.

Around the Italian city, several historic “wine windows,” or buchette del vino, have reopened in order to serve wine in a safe, socially distanced manner. The concept is simple: Rather than step inside an osteria, or a bar, you simply grab your glass from a window specifically built for the efficient dispersal of wine. It sounds like a venture that could have been conceived by enterprising hipsters today. But it is, in fact, a testament to the lasting savvy and creativity of the city’s Renaissance residents, who weren’t going to let a wave of Bubonic Plague get in the way of a nice glass of red.

Between 1630 and 1633, the disease that had been wreaking havoc on and off since the 14th century made its way through Florence once more; it’s believed that, in the first year alone, the city lost some 9,000 residents, or nearly 12 percent of its population. Vendors understood that face-to-face and hand-to-hand commerce had to be curbed as much as possible. So they took to selling wine out of these windows, and collecting payments on metal plates that were then disinfected with vinegar. In an email, Mary Forrest, an American who lives in Florence and is a founding member of the Wine Windows Association, adds that wine was also appreciated at the time for its medicinal value, especially because much of the available drinking water was impure and carried disease.

According to Forrest, five or six restaurants in Florence have reactivated their wine windows in light of the COVID-19 pandemic. In addition to (or, in some cases, instead of) selling wine, they’re also purveying gelato and coffee. Though no official document catalogues all of the wine windows in existence (though not necessarily in business), the Wine Windows Association has counted more than 200 in total throughout the region of Tuscany. Most of those are in Florence, and the Association has created an interactive map that shows how they’re dispersed. Forrest estimates that, on average, there’s about one wine window for every block in the city.

Though the windows proved uniquely useful during the 17th century disease wave, they actually emerged for different reasons during the 16th century. Forrest writes that “they were like an early farmers market,” in which producers could sell directly to customers without a middleman or the associated taxes. The windows remained popular places of business for centuries, gradually falling out of use during the 20th century. One reopened last year, before the pandemic.

The Wine Windows Association was launched, writes Forrest, with the goal of drawing renewed attention to these Florentine relics. “Many of them had been painted over, lost, plastered over, graffitied,” she writes, “so it was time to make the public interested in them and their history. We hope to put plaques on the walls near them,” as a means of solidifying their heritage status. They help us remember, she writes, “what life was like once upon a time”—knowledge we sometimes need to apply to the present moment.

Cerro Gordo has been abandoned since 1957. Now one man is social distancing there by himself.
Video • Wonder From Home

The secret to this sandwich is the cow’s fourth stomach.
Gastro Obscura

The aging process of this formaggio begins in a barrel of wine.
Want to see fewer ads? Become a Member.
Related

A contemporary debate would feel familiar to Europeans alive when the Bubonic plague arrived.
Read more
Thanks for sharing!