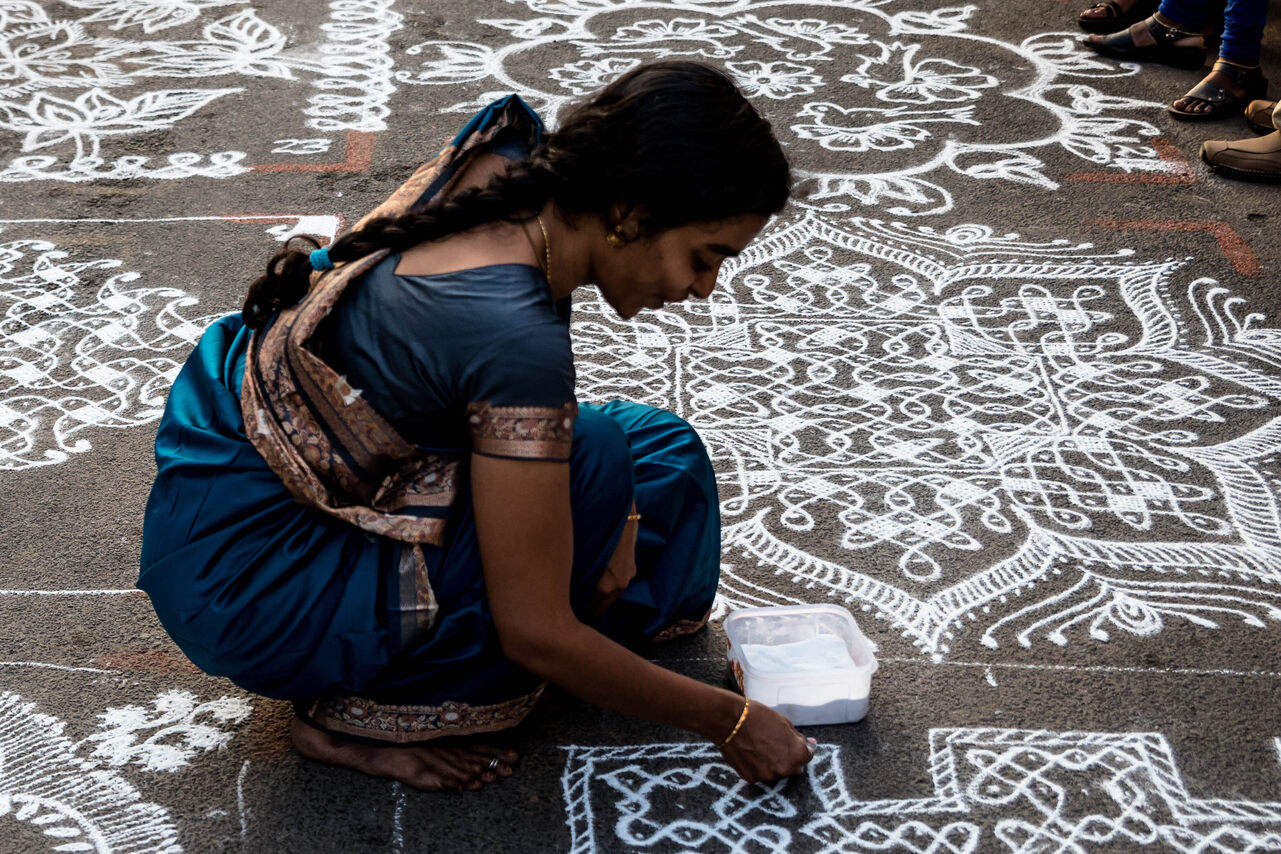 Kōlam festivals are one of the few remaining opportunities to showcase this slowly fading tradition. Paddy Photography/Getty Images
In This Story
Destination Guide

Before the first rays of sunlight stream across the rice fields and mud roads in the Nilgiri Mountains, before they force their way through the high-rises in the urban jungle of Chennai and Madurai, the women of Tamil Nadu are up for the day. In the dark, they clean the threshold to their home, and, following a centuries-long tradition, painstakingly draw beautiful, ritualistic designs called kōlam, using rice flour.

Taking a clump of rice flour in a bowl (or a coconut shell), the kōlam artist steps onto her freshly washed canvas: the ground at the entrance of her house, or any patch of floor marking an entrypoint. Working swiftly, she takes pinches of rice flour and draws geometric patterns: curved lines, labyrinthine loops around red or white dots, hexagonal fractals, or floral patterns resembling the lotus, a symbol of the goddess of prosperity, Lakshmi, for whom the kōlam is drawn as a prayer in illustration. The making of the kōlam itself is a performance of supplication. The artist folds her body in half, bending at the waist, stooping to the ground as she fills out her patterns. Many kōlam artists see the kōlam as an offering to the earth goddess, Bhūdevi, as well.

But the kōlam is not just a prayer; it is also a metaphor for coexistence with nature. In her 2018 book, Feeding a Thousand Souls: Women, Ritual and Ecology in India, an Exploration of the Kōlam, Vijaya Nagarajan, a professor in the Department of Theology and Religious Studies at the University of San Francisco, refers to the belief in Hindu mythology that Hindus have a “karmic obligation” to “feed a thousand souls,” or offer food to those that live among us. By providing a meal of rice flour to bugs, ants, birds, and insects, she writes, the Hindu householder begins the day with “a ritual of generosity,” with a dual offering to divinity and to nature.

The word kōlam means beauty. What it also embodies is a perfect symmetry of straight or curved lines built around or through a grid of dots. Nearly always, the grid of dots comes first, requiring spatial precision to achieve symmetry. The dot in Hindu philosophy represents the point at which creation begins—it is a symbol of the cosmos. No tools other than the maker’s deft fingers, and the rice flour, are used. Sometimes the designs are one continuous line that loops over itself, snaking to infinity. Intersecting into infinite figure eights, in a style known as pulli kōlam, the kōlam is also believed to be a representation of infinity, of the infinite cycle of birth and rebirth that forms a foundational concept in Hindu mythology.

Mathematicians and computer scientists have keenly studied the kōlam. The kōlam is “an unusual example of the expression of mathematical ideas in a cultural setting,” writes Marcia Ascher, a professor emerita of Mathematics at Ithaca College. Citing her ethnomathematical research (a field of study combining anthropology and mathematics), Nagarajan adds that “The kōlam is one of the few embedded indigenous traditions that have contributed to the western mathematical tradition.”

While the kōlam-makers themselves may not be thinking in terms of mathematical theorems, many kōlam designs have a recursive nature—they start out small, but can be built out by continuing to enlarge the same subpattern, creating a complex overall design. This has fascinated mathematicians, because the patterns elucidate fundamental mathematical principles. Nagarajan writes about how the symmetry of kōlam art, such as the recurring fractals in the design, have been likened to mathematical models such as the Sierpinski triangle, a fractal of recursive equilateral triangles.

Despite the deep mathematical principles exhibited in kōlam designs, practitioners describe the process as intuitive and enjoyable. “It’s easy, especially once you start with a proper grid of dots,” says Godavari Krishnamurthy, who lives in Chennai and has been making kōlams for more than half a century. Krishnamurthy speaks to me over the phone as her daughter-in-law, Kaveri Purandhar, who lives in Ahmedabad, translates.

Today, the tradition of making kōlam is wrestling with time, short attention spans, and porch-less apartment living. It is grappling with changing affiliations to divinity, and changing displays of community among women. Kōlam competitions during festivals are now one of the few opportunities to showcase this artistic ritual. Although fewer Tamils are making the kōlam today, the competitions allow for more inclusivity, welcoming all who are interested to participate in this traditionally Hindu ritual.

During the festival month of Margazhi on the Tamil calendar, which falls between December and January, Krishnamurthy takes to the street in front of her Chennai home, drawing elaborate kōlams on the main thoroughfare, defiantly taking up the road and stooping low for hours. There is almost an urgency to her work, her need to preserve a disappearing tradition, even as passing cars cover her in the dust of a city pulsating with modernity, with little space for such painstaking, back-breaking pursuits. “It’s a great exercise in concentration,” she says, via Purandhar, “and good for health and for nurturing one’s creativity.”

Krishnamurthy learned from her mother, and mothers have been teaching daughters for centuries. “The kōlam is a powerful vehicle for Tamil women’s self-expression, a central metaphor and symbol for creativity,” writes Nagarajan. “It evokes an entire way of being in the world; it articulates desires, concerns, sensibilities, and suffering, and ultimately it affirms the power of women’s blessings to create a desired reality: a healthy, happy household.” Although some men make kōlams, it is historically the domain of women.

Krishnamurthy’s immediate family offers wholehearted support, but little inclination to participate. She gives copies of her designs to anyone who shows interest. Little design books for kōlam have been around since at least 1884, writes Nagarajan. Skilled kōlam makers will maintain a ledger of their own designs that becomes a family heirloom.

Kōlam is meant to be ephemeral: the rice flour pattern gradually fades as day turns to dusk, trodden upon by visitors, family members, the odd bicycle, mailman, or stray animals. Holes appear in the design from tiny ants or nibbling bugs. But as the ritual of making kōlam itself is fading away, perhaps as a counter to this loss, more and more kōlam makers are turning to powders and acrylic paints that will hold the design for longer. The traditional kōlam continues to be made with rice flour and kavi, red ochre considered sacred. This is the kōlam drawn within the temple sanctum sanctorum, for the eyes of the gods, says Purandhar. But the elaborate kōlam displays entered in competitions and drawn on the streets of Tamil Nadu during the Pongal festival use a variety of colored powders, to the consternation of traditionalists who rue that kōlam is becoming more like the rangoli of North India—similar floor art made with colored rice flour, stone powders, or flower petals that follows a different set of design principles. (Ritual designs, made with colored rice flour or flower petals, are offered to gods all over India. The ālpanā in West Bengal, jhoti or chita in Odisha, muggulu in Andhra Pradesh, and aripanā in Bihar are only some of the design traditions that liven up thresholds across the country.*)

Tomorrow, while Chennai sleeps the tired slumber of a fast-paced, tech-driven life, Mrs. Krishnamurthy will rise before dawn, clean a patch of verandah in her home, and begin illustrating her obeisance to nature, and to the divine mothers that inspire a lifelong devotion to this ritualistic art. “It’s easy,” she says, again.

*Update 8/16/19: This post has been updated to note the diversity of regional, rice-based art forms in India.

The Food Stylist Who Creates Hollywood's Unreal Dishes and Drinks

Hearts made out of brioche and braised human legs are on the menu.
farms

Don’t be fooled by the name of this Bengali relish.
Want to see fewer ads? Become a Member.
Related

Guorui Chen brought a hometown tradition back from extinction.
Read more
Thanks for sharing!