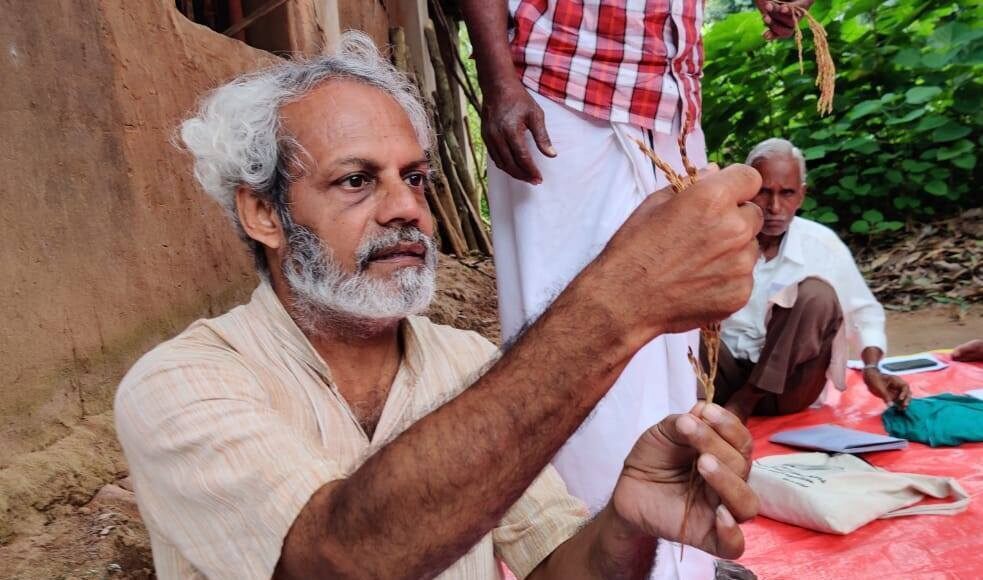 From Kolkata’s Howrah Junction, the oldest train station in India, the Howrah-Koraput Express noisily sputters past fields of rice and steel plants pumping plumes of smoke into the sky. It crosses above silt-rich rivers, past pastel-colored houses and water buffaloes grazing pondside, and, after a 16-hour journey, enters the lush green township of Muniguda, in the state of Odisha. From here, at the edge of the untouched forests of the Niyamgiri Hills, it’s another 10 miles by auto rickshaw or motorbike to a 1.7-acre plot of land that holds the last specimens of India’s bountiful rice diversity.

Basudha is a rice conservation farm that grows 1,420 traditional rice varieties, including some that are no longer found anywhere else in the world. Here, one can find such rare cultivars as Garib-sal (“garib” meaning poor in Bengali), an ironically named folk rice with nanoparticles of silver in each grain. Or Sateen, meaning “co-wife,” a rice that contains three grains in each hull.

Much of this fascinating diversity is at risk of erosion, says Debal Deb, the founder of Basudha. “It is very difficult to make people understand what they’ve lost, especially with varieties they have never tasted before,” he says. A former Fulbright scholar at the University of California, Berkeley, Deb is an ecologist-turned-agricultural scientist who, for the better part of the last 25 years, has traveled to the remotest corners of India—by train, by bicycle, and on foot—to collect and document the country’s multifarious and rich assortment of rice.

During his initial survey, Deb found that until the 1970s, farmers grew more than 110,000 varieties of rice across India. But he contends that the advent of the technology-driven Green Revolution led to a rapid decline of traditional landraces in favor of new, high-yielding varieties. The Indian government and the International Rice Research Institute advanced the cultivation of these imported landraces, while indigenous varieties disappeared from the fields. “They promoted the idea that the traditional varieties of rice are unscientific, backward, and that’s why people growing them were going hungry,” says Deb. “And that there would be a scare of another famine unless we grow more food, grow these high-yielding modern varieties.” In 1943, a famine in Bengal killed between two and three million people.

Nearly 90 percent of traditional rice varieties were lost in the aftermath of the Green Revolution. Deb estimates that only around 6,000 are extant today. As it turns out, extremely poor farmers, those who were farming on drought-prone, remote, or coastal saline land, continued to grow the indigenous varieties. As did farmers who could not afford to buy the fertilizers, pesticides, or expensive irrigation technology required to grow high-yielding varieties. “So far there has been no high-yielding variety that can grow on marginal lands,” says Deb. “So these farmers are still relying on traditional varieties, and they are the source of my collection.”

In 1996, Deb left his job with the World Wide Fund for Nature to begin his country-wide search for traditional rice. Fed up with the focus on conservation of what he calls “charismatic mega-fauna,” such as the tiger and elephant, he wanted to document the catastrophic genetic diversity loss of India’s staple crop. He started on home soil, setting up in a village in West Bengal. In 1997, he established Vrihi (Sanskrit for “rice”), a folk rice seed bank, where farmers can take seeds from Deb’s collections to plant on their own farms. Farmers from across the country bring traditional landraces from their own fields, and exchange these for other landraces in the seed bank.

Deb doesn’t charge any money, and doesn’t require a seed barter, but he encourages the farmers to distribute the seeds among neighboring farmers. “You are free to sell the rice produce,” he tells them. “But not the seeds.” 7,000 farmers from all over India have since collected or exchanged rice varieties directly with Vrihi. They then distributed this rice to other farmers, and Deb says around 17,000 farmers to date have benefited from Vrihi’s indigenous rice collection. Vrihi is now South Asia’s largest open-access rice seed bank, with 1,420 landraces in its collection.

In 2001, Deb established his conservation farm in West Bengal, naming it Basudha, “Earth mother” in Bengali. There, he grew the folk rice in his rapidly expanding collections. But he was beginning to tire of the skepticism from local farmers who could not fathom why a man with no farming background was asking them to return to the indigenous rice planting they had abandoned years ago. In 2010, farmers from Odisha invited Deb to set up operations in the Niyamgiri foothills, where the tiny farm now stands.

To grow over 1,400 distinct rice cultivars on a 1.7-acre plot of land while maintaining their genetic purity is no mean feat. Experts recommend an isolation distance of at least 360 feet on all sides for each variety of rice that is planted, since rice pollen can travel that far. It would be impossible to grow all the landraces on his small farm while still maintaining the recommended isolation distance, so Deb has devised an ingenious planting method. He times his planting so that each rice variety is surrounded by others with different flowering dates, to avoid cross-pollination. To maintain the genetic purity of each variety, every year Deb examines 56 morphological characteristics of each landrace. These characteristics include such aspects as leaf color, angle of the leaf, length and width of the rice grain, and aroma.

Deb offers striking examples of the rice he’s encountered on his mission to halt the genetic loss of one of the world’s staple food crops. He speaks of Lalu, a variety so fragrant that he could smell it wafting out of a distant household while on a walk in the fields in Odisha one day. “The smell was so strong, and reminiscent of rice pudding,” he says. Basudha has a collection of nearly 200 aromatic varieties. Other varieties on the farm have nutrient-rich, or even medicinal properties. He also mentions Nyavara, a variety grown primarily in Tamil Nadu and considered to hold neurotherapeutic value, that locals traditionally fed to epileptic patients.

About 70 landraces on the farm are flood-tolerant, including some that are capable of growing in 12-feet-deep water. There are landraces capable of growing not just in highly saline soil, but in the seawater that sometimes flows into coastal farms during cyclones. There are other flood-tolerant varieties that can remain submerged for weeks. “As if they hold their breath,” says Deb. “And when the water level subsides, they can breathe again.”

Even cultural traditions are lost with the fading of these rice landraces. Deb speaks of Jamai-sal, “son-in-law” rice, a cultivar grown specifically for the Bengali celebration of jamai shashti, when a jamai, or son-in-law, is invited for a feast. To serve the new son-in-law fresh-tasting rice, Jamai-sal was harvested mere days ahead of jamai shashti. Deb believes Basudha might now be the only farm where this rice is grown. “Without becoming a jamai, I have these seeds,” he laughs.

Establishing Basudha in the backdrop of the Niyamgiri Hills proved appropriate. For the past two decades, the region has been the site of a people’s movement to protect indigenous and tribal lands from the hands of government-backed multinational mining interests. The land on which Deb farms is in a tribal village, offered to him by farmers who understood the value of his mission, even as he was being rebuffed by India’s state and national institutes of agriculture.

But the long arm of industry frequently intrudes into his conservation efforts, both to his chagrin and amusement. A week after he published his findings on Garib-sal, the silver rice, a representative from a national mining company contacted him, asking how much money he’d want for 50 kilos (about 110 pounds) of the rice. They wanted to grow and extract silver from it. On learning that the company’s annual revenue was 27 million rupees a year, Deb named his price. “Multiply your 27 million rupees by 25, which is the number of years I have been growing and collecting this rice,” he told the representative. “Then pay me that for each kilo of rice.”

Deb has good reason to believe that his rice is invaluable. With a rapidly changing climate, crop diversity is a necessity. An increasing number of climate refugees can no longer subsist on the land that nurtured their forebears, and the preservation of indigenous rice, especially types suited to growing in adverse conditions, is more important than ever.

But in India, rice is more than food. It is the bearer of the country’s rich heritage. In Bengal, when someone wants to know if you’ve eaten, they ask “Bhaat kheyechho?” or “Did you eat rice?” The Hindu goddess of food is Annapurna, whose name can be translated as “full of rice.” Rice is both daily sustenance and sacred offering, celebrated as a rite of passage in the annaprashana, a ceremony marking an infant’s very first spoonful of rice. To let this cultural and culinary heritage perish is unconscionable. To save it, says Deb, imperative.

In the Great Lakes region, what some consider a weed is actually a sacred seed.
libraries

The Artist Trying to Explain Kentucky's 'Meat Shower' of 1876

Don’t be fooled by the name of this Bengali relish.
Related

Ancient Chinese Buildings Are Held Together With Rice, Sugar, and Blood

Edible additives in mortar served both practical and philosophical purposes.
Read more
Thanks for sharing!