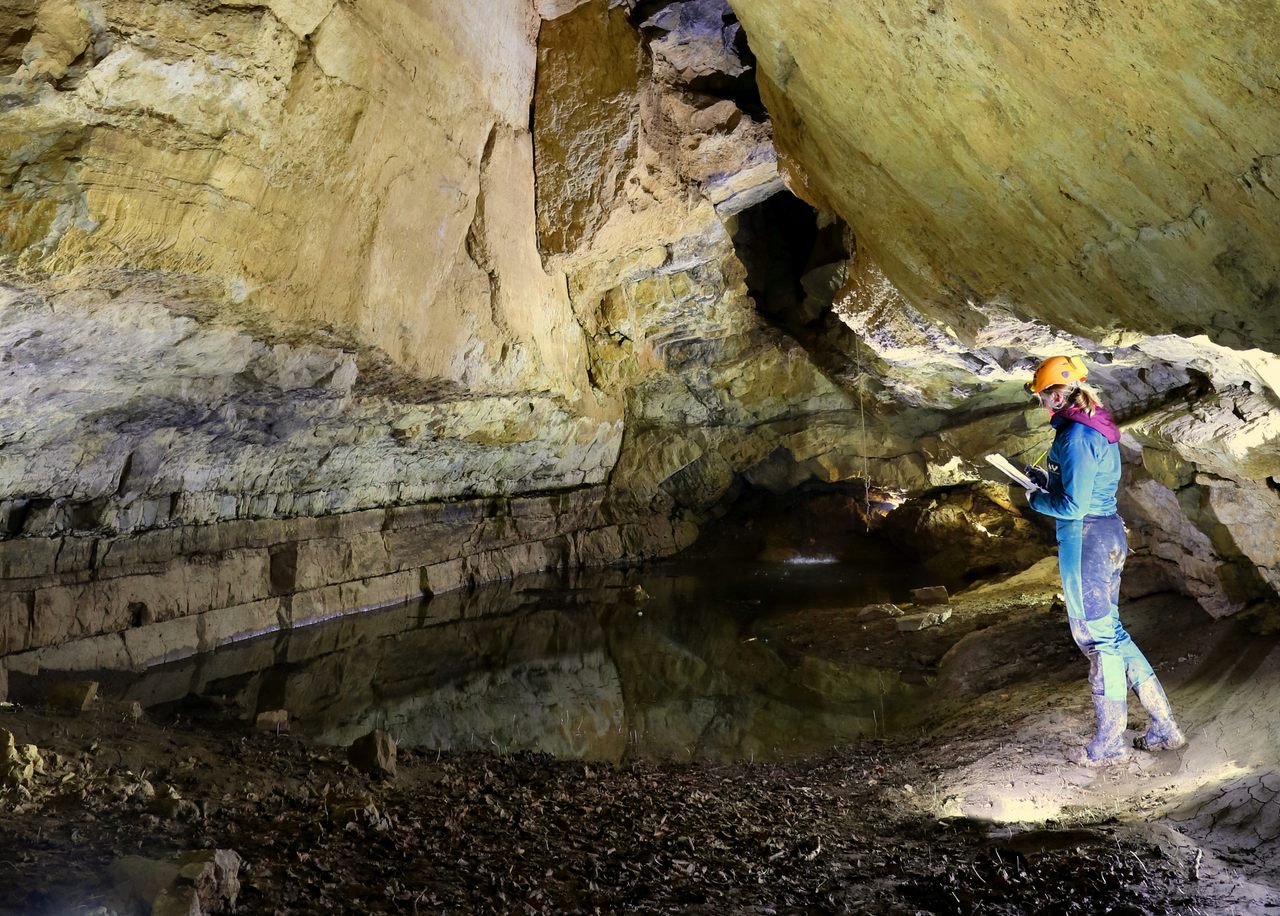 The restored pool in Bùs del Budrio in February 2018. Luana Aimar
In This Story
Destination Guide

Wildlife conservation gets the most attention when it’s focused on the big and exciting—polar bears, condors, sea turtles, elephants. They are our iconic mascots of nature, and ensuring they can survive and thrive requires a massive effort.

But nature and wilderness and loss don’t just exist on that scale. Take a cave in northern Italy called Bùs del Budrio, one among many worn out of the limestone in the foothills of the Alps. In it there was a waterfall, and below that a pool about the size of a one-car garage. And in that natural pool were tiny, white freshwater worms thought to exist nowhere else in the world.

The worms were flatworms called planarians—think back to high school biology class, where their simplicity and ability to regenerate make them useful model organisms for study. Back in 1936, entomologist Mario Pavan discovered some unusual planarians swimming in the cave pool. He sent specimens of the flat, eyeless worms, each about the length of two grains of rice laid end to end, to the University of Pavia, where anatomist Maffo Vialli deemed them members of a unique species. He named the species, known from this single pool, Dendrocoelum italicum. And then no one thought about them at all for eight decades or so.

In 2016, biologists from the University of Milan came across what looked to be another unique planarian species in another cave, about 80 miles away. They wondered how these new flatworms compare to the only other described species in northern Italy, D. italicum. So they made their way to Bùs del Budrio. Upon entering the cave via an old, winding staircase and a long passageway, they were struck not by what they saw, but by what was missing. “The original description of the cave mentioned a pool, but it wasn’t there,” says Raoul Manenti, a wetland ecologist who led the project.

A concrete barrier was diverting the water that once filled the pool. It had been installed back in the 1980s, along with a pipe, to feed the water to a nearby farm. By the time Manenti and his team arrived, the pool had long dried up, and the waterfall was reduced to trickle that fed a narrow rivulet on the cave floor.

The research team scoured the water for signs of the white flatworms, which had been largely forgotten since their discovery eight decades earlier. They weren’t hopeful at first, as conditions were far from ideal—planarians prefer still water, and the rivulet was turbulent and contained little food.

Yet, against all odds, D. italicum had hung on, just barely. In various surveys, the team counted between eight and 109 individuals. It’s amazing that they weren’t yet gone, but Manenti was keenly aware that it wouldn’t take much for the only known population of the worms to vanish for good. And it wouldn’t just be the loss of an odd white worm—in the nutrient-starved cave environment, they might as well be lions. “These planarians are at the top of the small trophic web of the cave water … they likely play an important role in regulating the other aquatic invertebrate fauna of the cave,” he says.

It was an opportunity, not only to save a species and its ecosystem, but also to return the cave to its natural condition—a feat in its own right. So, Manenti orchestrated what he believes was the first-ever habitat restoration project designed specifically to save a worm. At flatworm scale, at least, it was a massive effort.

First, the team needed the appropriate permissions. Since the cave is located in the Cariadeghe Plateau, a protected region, Manenti sought approval from area’s administrators to restore it. That was easy enough, but the local community was a harder sell. The idea of outsiders coming in and tinkering with their cave was initially met with suspicion, says Manenti.

To get the locals on board, Manenti organized a series of cave tours in which his team educated them on the unique species within. “We really focused on the fact that this worm is their worm because it’s endemic,” he says. They also piggy-backed on popular excursions to the bùs del lat, which roughly translates to “milk holes”—small caves in the region historically used for milk storage and cheese processing.

Next they had to convince the farmer, Giuseppe Bodei. Luckily, he was no longer reliant on the water to irrigate his land. The cave was as a kind of institution for his family—for generations, his ancestors had taken advantage of its low temperatures to store ice for use in the warmer months. Bodei found returning it to its natural condition an appealing prospect; his family mused about running tour groups between the cave and their farm, perhaps selling some of their produce in the bargain.

With all of the permissions and approvals out of the way—which took around six months in total—on December 4, 2016, the plan went into effect. The team carefully drew 73 planarians out of the rivulet with pipettes and temporarily housed them in tanks. Local cavers assisted in taking down the concrete barrier. “It was on the ceiling of the cave, so we had to climb it,” says Manenti. “It was very, very difficult to remove.” Despite the physical challenge, the job was done in just three hours, and the natural pool began to refill. By the next day, the worms were again swimming around in their original habitat, which had been gone for 30 years.

“It’s a pretty remarkable achievement,” says Pedro Cardoso, an entomologist and curator at the Finnish Museum of Natural History in Helsinki, “to have gotten all of these stakeholders involved and [performed] all of these conservation actions for a planarian.” In a 2011 paper, Cardoso pinpointed a general disregard for invertebrates as a major stumbling block to their conservation.

Had the team been working to conserve a big, furry mammal—a panda or a tiger, say—the public might have been keen to support the project from the get-go, without the public relations effort, says Scott Black, executive director of the Xerces Society for Invertebrate Conservation in Portland, Oregon. “We tend to see mammals in a better light than invertebrates because they look like us,” he says, while creatures such as planarians are more alien. “The neat thing about this [project] is that they were able to get the community on board—it just took that special effort.”

Manenti and his team have made regular visits to the cave since its restoration to see how the flatworms are doing. A year later, there hadn’t been any notable surge in their numbers, they reported recently in the journal Oryx, but that may still come. Closely related planarian species, especially those that dwell in caves, are slow to reproduce. Even when they do, baby planarians are so small that they’re nearly impossible to detect. Manenti plans to keep returning the cave to keep tabs on the population’s growth. But then again, success isn’t only measured in numbers.

“Just the fact that it was possible to work with this many people, and that the local community now has knowledge of this unique species,” says Cardoso, “it’s really a victory for the project, irrespective of what happens with the population.”

Plus, there’s something comforting in knowing that this unique species is back where it belongs.

The Long History of the Mind-Bending ‘Tiny Planet’ Panorama

Spherical landscapes helped an 18th-century scientist convey the enormity of the Alps.
invertebratesconservationcavesecosystemswater

For one biologist studying the rock frogs' behavior, safeguarding their habitat is personal.
caves

A Visual Guide to the Creatures That Could Disappear From Each U.S. State

If you're endangered, it helps to be famous and cute.
caves

Its entrance was decorated with engraved figures.
abandoned