How a Japanese Family Jumpstarted Rice Farming, Deep in the Heart of Texas - Gastro Obscura 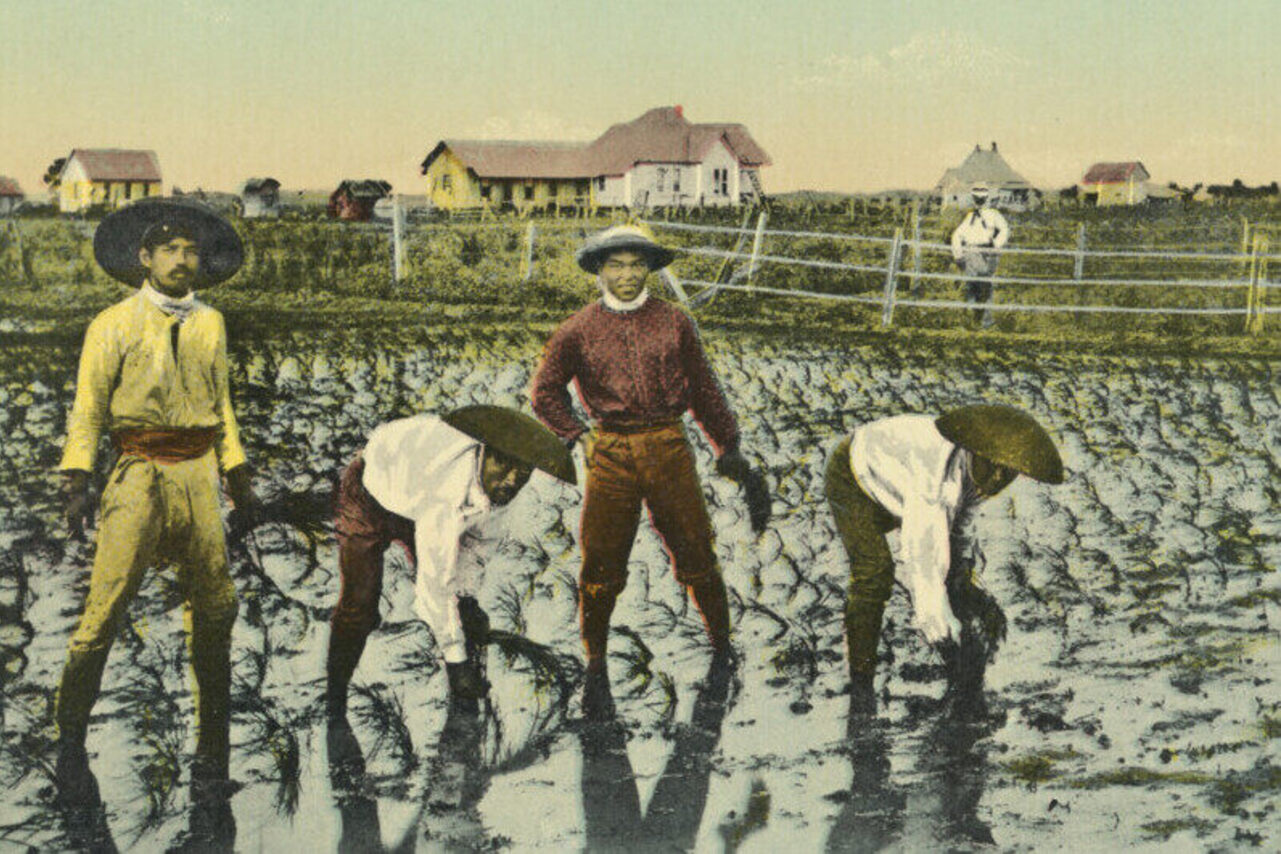 The Japanese presence near Houston was commemorated in postcards. Courtesy Megan White
In This Story
Destination Guide

Half a century before they were home to the Johnson Space Center, the low-lying gulf prairies southeast of Houston, Texas, were fertile with opportunity. Specifically, it was wide open country for Japanese migrants, invited by the Houston Chamber of Commerce, who brought their ingenuity and effort to boost the American rice crop. And the state might have become America’s rice bowl (an honor that now belongs to Arkansas), if not for waves of nativism—full of sentiments that echo in today’s border politics.

In 1900, there were only 13 Japanese citizens living in the entire state of Texas. That number grew rapidly in the first decade of the new century, as immigration increased. Few states could offer as much space to grow as Texas. “Like other immigrant groups, Japanese migrants wanted to better their economic situation,” according to Scott Pett, a PhD candidate at Rice University and author of “Japanese Texas: On The Border of Belonging,” published in the interdisciplinary journal Transnational Asia. “Texas represented a chance for them to own and work land in a part of the country that was more welcoming toward them.” At least for a while.

One of the arrivals was Seito Saibara, who first came to Texas in 1904. Saibara, a former university president and the first Christian member of Japanese parliament, had been invited specifically by the city of Houston to improve the state’s rice industry. He immediately sent word to his wife, Taiko, and oldest son, Kiyoaki, and asked them to bring from Japan 300 pounds of shinriki rice, a strain never before seen in the United States.

“For the early rice colonies in Texas, this was a strategic migration on the part of the Japanese government and in collaboration with very prominent white rice farmers and the U.S. Department of Agriculture,” says Megan White, a PhD candidate at the University of Illinois Urbana-Champaign who is an expert on rice cultivation in Texas at the turn of the 20th century. “These first farmers aren’t farmers at all in their background.”

Japanese enclaves began springing up all over the state, Pett writes, some with the support of the United States government. In December 1905, a “Mr. Akioki” visited the Department of Agriculture in Washington, D.C., for information in advance of launching a tea and silk farm on a 10,000-acre tract outside of San Antonio. In 1906, a man named Takayama or Tayayama began a rice colony in Deepwater. Saibara’s support from Houston was offered in the hopes that he could show them how to rear rice in a region with a hurricane season—an analog to the Japanese typhoon season.

“The Great Galveston hurricane of 1900 had just destroyed one of the busiest ports in the U.S., and the Spindletop oil field began gushing in 1901,” Pett writes in an email. “So the Gulf Coast needed help rebuilding and Texan officials saw Japanese horticultural knowledge, practices, and capital as a way to improve their rice production, especially.”

The Gulf Coast rice industry had a unique situation, White writes in her dissertation, “Rice Empires: Japan, the USDA, and the Inter-Imperial Development of the Gulf Coast Rice Industry 1890–1924.” It was mechanized, the first in the world, but the rice that Texan farmers were growing wasn’t robust enough for the technology built to refine it. “They noticed the rice was crumbling in the milling process,” White says. “They were losing half their crop. But Japanese rice was proven to be much more resilient.”

Saibara’s precise intention wasn’t just to help the people of Texas. In an oral history documented as part of Rice University’s Houston Asian American Archive in 2012, Nancy Saibara-Naritomi, Seito Saibara’s great-granddaughter, says that her ancestor had another motive.

“The reason why he came to Texas was because he believed there was going to be a population explosion in Japan and there would be no food to eat,” she says. “And so he decided to come, with his family, and help protect the Texas rice industry while at the same time making surplus food for Japan in case they were going to be starving.”

Saibara delivered. According to Houston’s chapter of the Japanese American Citizens League, rice yields jumped from about 19 barrels an acre using Honduran or American seed to 34 barrels per acre over the three years since the first harvest. Despite this success—or perhaps in part because of it—nationwide nativist sentiment was gaining traction. Two years after the Saibaras arrived, the Naturalization Act of 1906 greatly curtailed immigration. Later, frustrated by the lack of a path to citizenship, Saibara left the country to begin a rice colony in Brazil. His son, Kiyoaki, wouldn’t become an American citizen until 1953, after the Immigration and Nationality Act abolished racial restrictions on naturalization.

Other factors undermined Japanese rice cultivation in Texas as well. The rice market crashed following World War I, leading other Japanese growers to abandon the crop in favor of growing cotton or dealing in silk. The Saibaras, however, stuck with it. Saibara-Naritomi recalls eating Blue Rose rice, and the family business continuing throughout her upbringing. Blue Rose rice was a genetic riff on several successful Japanese rice strains, developed by Sol Wright, a white rice farmer. It was branded as the first American rice, despite its East Asian origins.

“Blue Rose was what I was raised on,” she says. “Blue Rose was rice that was stronger against disease and harsh conditions. I don’t think I learned any other kind of rice but Blue Rose.”

The Saibara farm continued while other Japanese farms in the area petered out, but what might have developed into a larger agricultural project across the state was cut short by fear-mongering, some of which actually came from the southern border. Japanese immigrants had arrived as labor in Mexico, and even then “border crossings from Mexico hit a nerve in the public imagination of the time,” says Pett. A 1907 article in Cleveland’s Plain Dealer was titled “Japs Gather in Border States / Thousands of War Veterans Are Rapidly Coming Into Mexico / Could Quickly Seize Texas and California in Event of War.”

“The parallels between 20th- and 21st-century U.S. nativisms are astounding,” says Pett. “In the 1940s, we reused fencing from Japanese internment camps to enhance barriers at the Mexico-U.S. border. In 2019, the current [U.S. President] made plans to reuse former internment camps to detain migrants from Central and South America. There’s something about the border—a desire to militarize it—that allows the same discriminatory panics to reinvent themselves over and over again in American culture.”

A possible agricultural revolution in Texas was cut short, and rice didn’t regain its footing in the country until after the Great Depression. Today, the Gulf Coast rice industry jumpstarted by Saibara spans Texas, Louisiana, and Mississippi, but is relatively modest in scale. The Saibara legacy continued in other ways as well. During the 1904 World’s Fair in St. Louis, Masanoho Matsudaira, vice president of the Japanese Commission, traveled all the way to the Saibara farm in Webster to promote its success to the world. Half a century later, the family’s close proximity to the Johnson Space Center presented Kiyoaki Saibara with an opportunity to meet John Glenn before the astronaut (and later senator) visited Japan in 1963. Saibara asked Glenn to give the emperor his regards, if he had the chance.

As the story goes, according to the Houston chapter of the Japanese American Citizens League, Glenn chanced it, and passed the message along to Hirohito. The emperor is said to have replied, “How is my dear friend, Mr. Saibara?”

After an African-American cemetery was bulldozed, families wondered what happened to the graves.
neolithic

Chinese farmers domesticated the common carp as early as 6200 BC, researchers say.
infrastructure

“Drancy is like the French bad conscience.”
Video • AO Docs

Cooks in the Southern United States still whip up this spicy, seductively sweet condiment from the 1950s.
Gastro Obscura

A tiny plot of land in eastern India safeguards 1,420 kinds of rare indigenous rice.
Read more
Thanks for sharing!