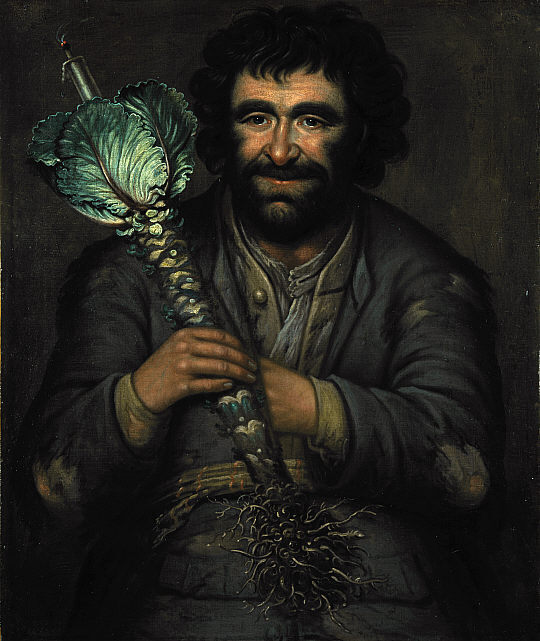 This work by painter Richard Waitt depicts a Scottish jester or fool holding a kale lantern (note the candle at the top)—a practice that was part of 1800s Halloween parades. Public Domain

On the eve of Halloween, the old lore goes, the veil between worlds grows thin. Spirits walk the earth; magical forces are particularly potent. And to mark and make the most of this spooky-special time of year, Scottish youths sneak onto local farms or into their neighbors’ gardens at midnight, blindfold each other, pull stalks of kale from the ground, then read them, analyzing their length and girth, the quality of their cores and taste, and the amount of dirt caked onto them, to divine what kind of partner they’ll marry. Or at least many did until around the early 1900s.

This was just one of several magical, kale-based Halloween rituals practiced across the British Isles. According to folklorists, some individuals hung kale over their door overnight, then placed it under their pillow the next to prompt prophetic dreams. Children who wanted a sibling could place a stalk of kale outside their parents’ door to nudge a sibling into being. Irish families in particular stuck charms into the colcannon, a potato, cabbage, kale, and onion mash they served on Halloween. Whoever found a ring charm would marry within the year, while whoever found a thimble charm would be a spinster. A woman could also scoop the first and last spoonful into a stocking and hang it over her door—the first man to walk beneath it the following day was destined to be her husband.

The nature and popularity of kale-based rituals likely varied over time and space, notes Celtic studies professor and folklorist Juliette Wood. Regardless, it seems clear that until relatively recently, at least in this one corner of the world, kale was not so much a superfood, as it has been branded in the United States, but an occasionally supernatural food.

No one is sure when people in the Isles started using kale for Halloween divination games. Popular accounts describe these rituals as ancient Celtic practices, but Wood argues this idea doesn’t hold water. For starters, academics have long accepted that there never was a cohesive, enduring Celtic identity or set of rituals and that we don’t know much about ancient regional rituals. More practically, most historians hold that kale did not spread to the British Isles, or become part of regional diets, until the Middle Ages.

The first clear evidence of blindfolded midnight kale picking in Scotland seems to crop up in a 1769 travelogue. The ritual also features prominently in Scottish literary hero Robert Burns’s 1785 poem “Hallowe’en,” an extensively researched and notated work that drew on older poems and firsthand accounts of festivities. From there, it pops up frequently in regional folklore collections. “If it was already established … by the end of the 18th century,” says Peter Maxwell-Stuart, an expert on early modern European magical practices, “it is a reasonable inference that it was older,” albeit by an unclear margin.

We do have a good idea as to why people practiced kale-based divination on Halloween. As the Halloween historian Lesley Bannatyne points out, from the time Irish monks, almost 1,000 years ago, started writing about the festivals that later served as inspirations for Halloween, they consistently noted that they were a time for divination. (Woods adds that similar rituals occur across cultures, and during other transitional times of year, too.) Regional divination practices didn’t require anything fancy or specific, explains Julian Goodare, a historian of folk beliefs at the University of Edinburgh, just something accessible that would yield a truly random, hard to manipulate reading.

Kale fit that bill. A uniquely hearty crop, it and its cousin cabbage were two of the few crops even the poorest residents of Ireland, Scotland, and Wales could reliably grow. In Scotland, kale was so ubiquitous that home gardens are still often called kaleyards. “Even the bells of St. Giles Cathedral in Edinburgh tolling at 2 p.m. were known as the kail bell,” says food historian Christopher Trotter, “as they called workers without watches in for their midday meal.” Halloween falls right in the traditional cabbage and kale harvest season.

The same logic also explains a host of other Halloween divination traditions based on common foods, such as cracking egg whites into water or dropping apple peels onto the ground (to supposedly form your hidden beloved’s initials).

Most historians believe Halloween divination games were less about serious magical beliefs and more about fun and matchmaking. Much like how bobbing for apples used to be about getting potential suitors up close and personal, you might guide a blindfolded friend to the perfect stalk of kale, or twist the reading, to match the stalk to someone you wanted to set them up with.

Kale divination survived into the 20th century, crossing the ocean with immigrants and appearing in American guides to celebrating Halloween. In the early 1900s, though, cultural makers and shakers sought to make Halloween a systematized and respectable Victorian tradition. Divination and the potential for teenage necking baked into them fell out of fashion in favor of family-friendly community parties and other old traditions, such as costumed mumming for food. Gradually, Halloween became a children’s holiday, focused on juvenile pranks and, eventually, candy. Halloween was left, incidentally, loveless and kale-less.

Of course, between our modern-day obsessions with kale and with reviving pre-modern rituals, it might seem as if there’s space for a kale divination revival. “I’ve heard of a few uses in retro Halloween parties,” says Halloween historian Lisa Morton. But since so few people have kale farms or gardens, the modern version might not be much fun.

“I don’t think the urge to peer into the future will ever leave us,” says Bannatyne. But “maybe kale has seen its day as the vehicle [for that sort of amorous prognostication] come and go.”

How Vodka Became a Currency in Russia

Bake the recipe remnant of a potato doughnut empire that once stretched from the United States to Japan.
food

Can a "dumb cake" help you discover your fate?
islands

The vegetable is a reminder of the legacy of dispossession.
Video

One of Edinburgh's oldest pubs hides a 19th-century skittles alley in the back.
Johnstone, Scotland

Learn local history while picking up groceries at this museum tucked inside a supermarket.
Want to see fewer ads? Become a Member.
From Around the Web
Atlas Obscura Trips
Scotland: Highland Clans and the Trail of Tartan
View This Trip
Thanks for sharing!