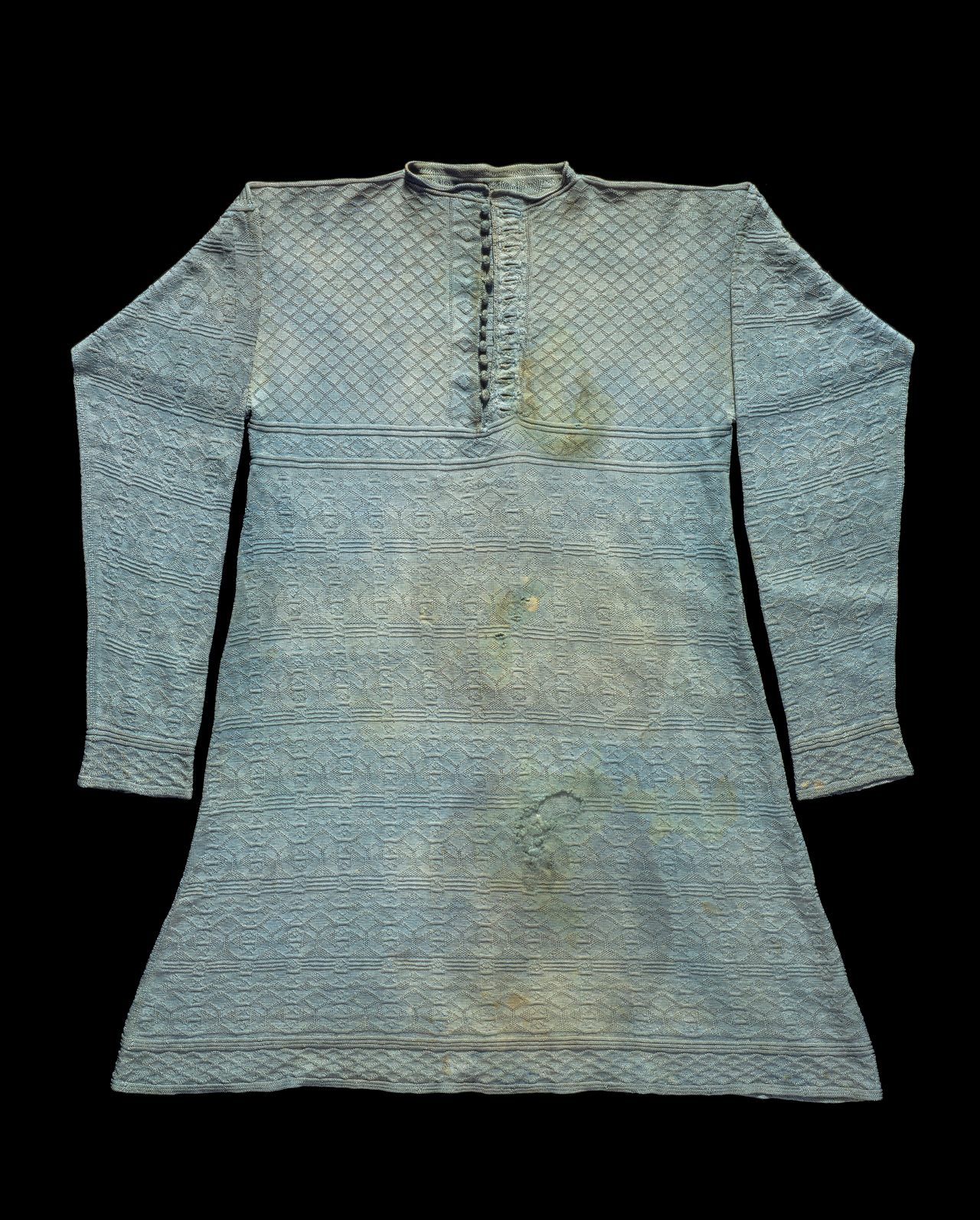 Scientific testing is underway to determine if King Charles I wore this garment at his execution. Courtesy of Museum of London
In This Story
Place

A museum that chronicles the interesting and often dark history of the London docklands, once one of the major trading ports of the world.
Destination Guide

It was cold in London on the morning of January 30, 1649—the day King Charles I was scheduled to be beheaded on a scaffold in front of the Palace of Whitehall, following a conviction for high treason during the English Civil War. Dressing before before sunrise, the king reportedly donned an elaborately patterned “sky-coloured satten wastecoat” beneath his black garb. He didn’t want to shiver in the winter air, it’s been said. “He didn’t want people to think that he was frightened,” says Meriel Jeater, a curator at the Museum of London Docklands.

Jeater knows a lot about the king’s layers. For almost a century, the museum has had in its collection a faded and stained knitted silk waistcoat, with sleeves, that came with a note of authenticity, claiming that the doctor who attended to the king that day had taken possession of it on the scaffold after the monarch’s death. The item is now on display at the museum as part of Executions, an exhibit that explores 700 years of public executions in the British capital—from the first documented one, the hanging death of William Longbeard for sedition in 1196, through the hanging of Michael Barret for his part in a bombing in 1868. These executions were so common that physical reminders of them were long a part of the London landscape. “Ordinary prints of London happen to have in them pictures of gallows because they were landmarks in the city,” Jeater says. Pictured in another seemingly benign image of the River Thames in the museum’s collection is a gibbet, a dead body hanging in a cage as a reminder to others of the fate that awaited those who committed any one of 200 offenses, from theft to treason.

The museum can’t yet guarantee that this pale blue garment—meant to be worn over a shirt but under a jacket—was the one the king actually wore on the day of his death, but the exhibit includes other items said to belong to Charles I, including a handkerchief, a pair of gloves, some fragments of silk clothing. These royal raiments are displayed alongside personal items from ordinary people who were put to death in the public square as evidence of the intimacy and far-reaching legacy of this history of public, state-sanctioned punishment.

Among the other artifacts on display are letters written by condemned prisoners at Newgate Prison. One was penned by a 19-year-old named Henry Conway, who was sentenced to death for forgery. He includes a short list of friends and family that he hoped would be allowed to visit him before his execution on July 27, 1829. It is likely he got to see them, Jeater says. In Executions, visitors can also hear these letters read aloud by people who are currently incarcerated at Pentonville Prison in London, an invitation to consider the connection between public executions, now considered to be a barbaric practice, and the modern carceral system.

Another item that the curatorial staff found especially moving is a bedsheet that belonged to James Radclyffe, the third Earl of Derwentwater, who was beheaded in 1716 for treason. Before his death he was jailed in the Tower of London and, as was common for prominent prisoners, his wife, Ann, was allowed to live with him. Ann took the sheet from their marital bed and embroidered it with flowers, a heart, and a kind of epitaph: “The sheet off my dear, dear lord’s bed in the wretched Tower of London.” Upon examination, the museum discovered that Ann’s lament is sewn in human hair. Jeater believes it includes the hair from both wife and husband, but additional study would be necessary to show that conclusively.

Further testing is already underway on that vest believed to have belonged to Charles I. The museum has concluded that the quality and craftsmanship are generally what one would expect for a wealthy man in the 17th century. Now curators are trying to get more specific. A tiny fragment will undergo radiocarbon dating, and the cloth will undergo dye analysis to determine what color the waistcoat would have been before decades of light damage. (To prevent further degradation, in the exhibit, the waistcoat is kept in darkness until a visitor presses a button to briefly illuminate it.) The museum is also consulting experts to understand how it was constructed.

The results will likely never be 100 percent conclusive, but for Jeater, the more important truth is the one the artifacts together tell about the public reaction to these gruesome spectacles, then and now. “You could focus on numbers—the thousands executed for this crime, the hundreds executed for that crime—but then people become statistics,” she says. “We want to pull out the ordinary human stories, so people can think a bit about how it might have felt to have been in that situation.”

The Hanging Cage That Held an Infamous Québec Murderess

It had been all but forgotten for most of the 20th century.
museums