Letters from the Loneliest Post Office in the World - Atlas Obscura
Want to see fewer ads? Become a Member. 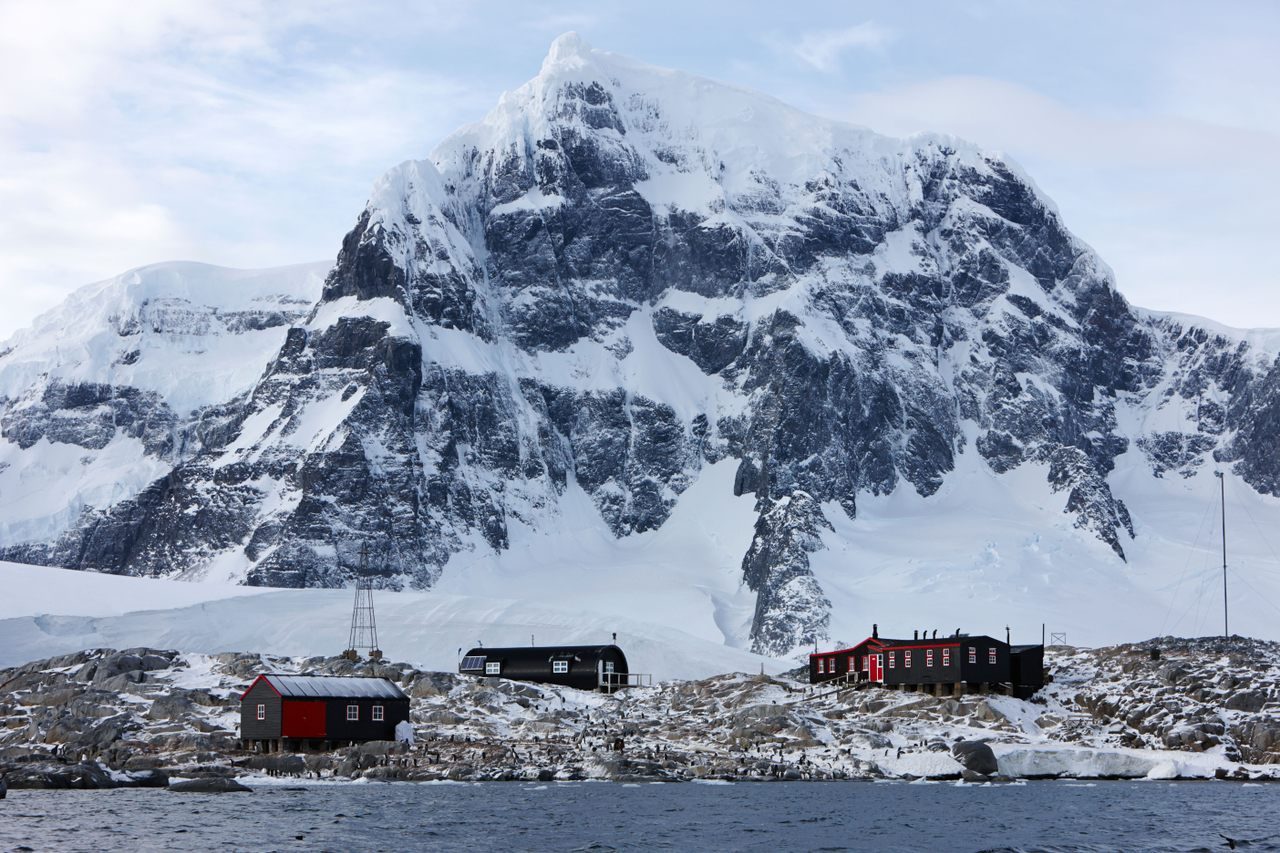 Goudier Island, off the northwest coast of the Antarctic Peninsula. is home to what one stamp collector from England described in 1946 as “the loneliest post office in the world.” JoeFoxBerlin / Radharc Images / Alamy Stock Photo
In This Story
Place

The best place to send your postcards home from Antarctica.

Goudier Island is a windswept speck of dark rock located off the northwest coast of the Antarctic Peninsula. Two prefabricated wooden buildings and a metal Nissen hut, all painted black with red trim, stand near the waters of Port Lockroy. A Union Jack snaps on a flagpole and casts a shadow over dozens of squat gentoo penguins idling around the hut.

In addition to the penguins, Port Lockroy, as the tiny settlement on Goudier Island is known, is home to the world’s most southerly functioning post office. In pre-pandemic times, approximately 18,000 tourists visited the remote location annually. But for some, a short tour of the world’s most isolated mail drop isn’t enough. Each year hundreds compete for four jobs at the post office, for a chance to live on an island the size of a football field for five months at a time, without internet, cell service, or even running water.

The island has always had this mysterious draw; in the 1940s and ‘50s, small bands of British men formed the first generation of Port Lockroy postmasters. “Four things I recall when eventually I arrived at Base ‘A’ in Port Lockroy,” Allan Carroll said of his arrival in 1954. “The outstanding scenery, hideous piles of ashes and empty tin cans a few feet from the door, and the rather odd attitude shown by the people we had come to relieve.” “It wasn’t quite the welcome I’d anticipated,” he told an oral history interviewer. Several men who worked in Port Lockroy shared their experiences of life’s triumphs and tribulations while working on the edge of the world in oral history interviews conducted by the UK Antarctic Heritage Trust and the British Antarctic Survey Club. Almost to a man, they said their time in the Antarctic was the one of the best of their lives.

Men like Carroll, who had served in the Royal Air Force, often found their way to Antarctica because they’d grown up reading about Robert Scott’s journey to the South Pole in the early 1900s and they viewed Antarctic service as a gateway to adventure. Jim Fellows, who worked at bases in the 1950s, said he applied for the job to escape a routine 9-to-5 life. After serving in Asia with the British military for five years, Fellows had found a good government job, but didn’t find it fulfilling. He told an oral history interviewer, “I thought there must be something different to this.”

As it is today, the staff at Port Lockroy was small during the 1940s and 1950s, just four or five men. Typically, all the men were in their twenties, veterans of compulsory military service from every economic class, and all had volunteered to work two-year tours with the Falkland Islands Dependency Survey (FIDS), the British government organization occupying Antarctica. They dressed in a grab-bag assortment of military gear, army trousers, submarine sweaters, flannel shirts, and big army boots. Many of them grew beards and others tried to with various levels of success. They were as far from home and any vestige of formal discipline they experienced in civilian life or in the military.

In 1946, G.F.M Hardy was the base leader at Port Lockroy, one of five bases the United Kingdom operated in Antarctica at the time. The bases were built as part of Operation Tabarin, the British government’s attempt to cement sovereign claims to the territory coveted by Argentina and Chile. Hardy and the other base leaders served as bureaucratic Swiss army knives: magistrate, coroner, customs collector, receiver of wrecks, and postmaster.

Postmaster was one of the most important jobs a base leader would fill in their time on the continent. Carroll, who eventually worked as base leader at Port Lockroy, described the postal duties as “just one more aspect of the political scene,” and Fellows recalled postmasters as an important part of enforcing “almost fictitious” territorial claims over the peninsula. Mail was also a lifeline for the men on the island. A resupply ship would bring new men, fresh food, and letters from home; it could be up to a year before the next delivery arrived.

When the mail arrived, the men savored the letters, but in addition to any personal correspondence he received, Hardy had to sort through bags of official correspondence. Here was the tedious part about running what a stamp collector from England described in 1946 as “the loneliest post office in the world.”

Amateur collectors wrote from across the globe. One letter traveled all the way from Bombay. Others came from Brazil, Czechoslovakia, and West Germany. They were sent from big cities and small towns, and all of them asked for a one-square-inch stamp bearing a profile of King George VI and a map of British Antarctic Territory printed in green ink. Though these collectors’ items were produced in England, they were distributed only to FIDS base leaders, and Hardy and his far-flung colleagues (post offices were operated at least two other bases, including Hope Bay) were the gatekeepers.

Today, some of these letters survive and are kept in the British Antarctic Survey Archive in Cambridge. Reading over them, one is moved deeply by those who sought not just a stamp but a connection with the person reading the letter, whoever that might be.

The most touching letters were written by people experiencing hardships. In February 1947, Glenn W. Anderson of Tacoma, Washington, wrote to Port Lockroy. He was a disabled veteran of the Second World War and was unable to work, so he had taken up his old hobby of stamp collecting to pass the time. In May of the same year, 63-year-old widower Paul Buneman of Schleswig-Holstein, West Germany, wrote asking for “an interesting correspondence…with either gentlemen or ladies, anywhere in Antarctica.”

The men sorting the mail had mixed reactions to their task, though they were vaguely aware of its political value. Fellows expressed some annoyance about the specificity of the collector’s requests; how many stamps they wanted, whether the stamps should be franked or canceled, and how to process their money orders.

Eventually the postmasters typed up a boilerplate response telling collectors they would no longer be able to fulfill requests solely for stamps. They didn’t have the time or resources to send every collector a stamp, let alone multiple stamps in mint condition. All the letter writers would get was the stamp affixed to the return envelope, likely in poor condition after its long journey and not ideal for a collection. Still, the letters continued arriving.

Individual sovereign claims to Antarctica were effectively suspended by the Antarctic Treaty in 1959, and Port Lockroy closed in 1962, its post office now superfluous. The wooden buildings were left to the elements. Across the world, some lucky philatelists displayed stamps from a deserted, faraway island without mail service.

Eventually, the base was refurbished and reopened by the UK Antarctic Heritage Trust in 1996. The buildings, the weather conditions, and the isolation are constants in Port Lockroy, as are the penguins. The political role of the post office continues as well; the British Antarctic Territory is today the largest of the British Overseas Territories. The most enduring legacy of Port Lockroy, though, is the desire of some to seek out the loneliest corner of the earth—and the world’s unceasing curiosity about those who choose to do so.

Join us for a daily celebration of the world’s most wondrous, unexpected, even strange places.
boats

Jill and Jim Koch have been delivering mail by boat to Hells Canyon for decades, following a century-old route.
nature

A gift guide from the Atlas Obscura team.
islands