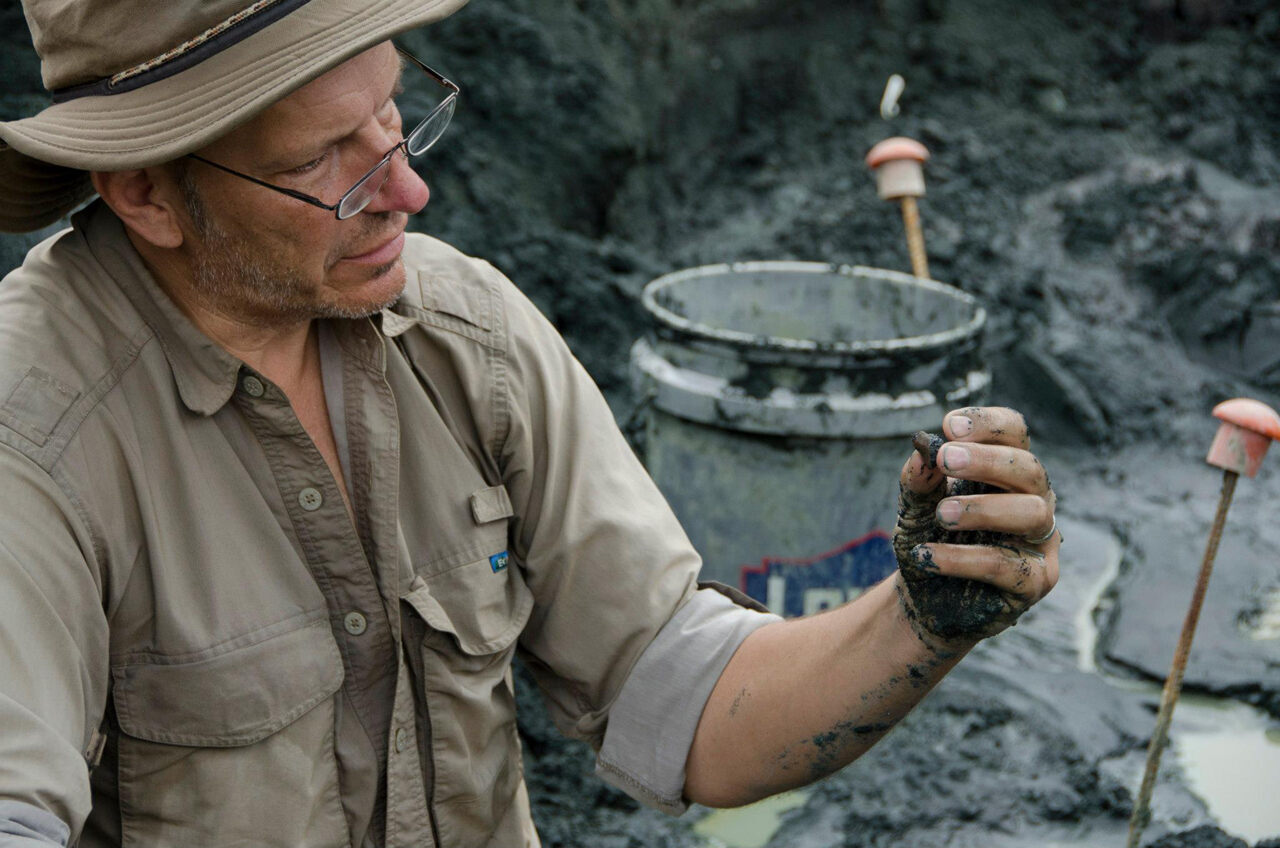 Mantua Township is like a lot of South Jersey—15,000 people, the look of sleepy crossroads village combined with the chain stores and restaurants of a typical American suburb. One seemingly unremarkable spot in Mantua Township is a Lowe’s hardware store on Woodbury Glassboro Road. But it hides something extraordinary. Out back, there’s a an old quarry that’s now a giant mud pit. Descending into it, every step takes you back in time 400,000 years. All around are the lines in rock, called striations, that mark phases in geologic history. And among them, tons of fossils have been found. Despite appearances, it’s not unusual for the area. About 12 miles to the north, in Haddonfield, some farmers dug up the world’s first nearly complete dinosaur skeleton in 1858, a duck-billed dinosaur named Hadrosaurus. A few minutes away in what is now Ceres Park, the first fossils of a meat-eating dinosaur called Dryptosaurus were found back in 1866.

On this spot, 66 million years ago, everything was under about 70 feet of water. Swimming around the site of the Lowe’s were mosasaurs—dragon-like marine reptiles as long as a school bus, with paddles for limbs and a six-foot jaw. There were also crocodiles and turtles, and scores of smaller species.

That’s where Rowan University paleontologist and geologist Ken Lacovara comes in. Lacovara, who grew up about an hour away from Mantua Township, was behind the 2005 discovery in Argentina of Dreadnoughtus (Latin for “fears nothing”), one of the largest dinosaurs ever discovered. Lacovara first learned about the site behind the Lowe’s from a friend in 2003. So he started bringing his students there to practice excavating. It was a great site for that, but it also held a surprise—a layer with fossils that were still articulated, suggesting that the creatures in that layer had died suddenly, all at once, and settled to the bottom. Lacovara suspects that the layer could come from the moment, a little more than 66 million years ago, when an asteroid or comet struck the Earth, setting off a cascade that helped wipe out the dinosaurs and many other species. Evidence of that moment has long eluded paleontologists, and has not been without controversy.

Lacovara and his team were faced with a lot of research and testing. Might they have an unprecedented window into the moment of mass extinction? Can they see whether dinosaurs truly went out with a bang or a whimper?

But just as he was getting excited about the site’s potential, he learned that it was about to be turned into an apartment complex. So he turned to Michelle Bruner, the Leslie Knope of South Jersey, an enthusiastic government worker who cares deeply about her township. She jumped in on the race to save the site by setting up community dig days that anyone could attend. People soon began traveling from all over the world to dig for fossils behind the hardware store. It grew so popular that their vision expanded, and now all that work is coming to fruition: In three years, thanks to a recent big donation, they hope to open the Jean & Ric Edelman Fossil Park: a beautiful, world-class 45,000-square-foot natural history museum. They now expect thousands more to visit, and support finding a potential answer to one of the biggest questions in paleontology.

To hear from Lacovara and Bruner, listen to Far Flung with Saleem Reshamwala (formally called Pindrop), a podcast produced by TED that travels around the world in search of surprising and imaginative ideas. You can find it on Apple Podcasts, Spotify, or wherever you listen to podcasts.

Drink your way through the history of life on Earth.
dinosaurs

And why the scars left by meteoritic impacts tell us about life, the universe, and everything.
Video

Meet Podokesaurus holyokensis, a prehistoric resident of the Commonwealth.
Read more
Thanks for sharing!