The Keeper of Sacred Bees Who Took on a Giant - Atlas Obscura
Want to see fewer ads? Become a Member. 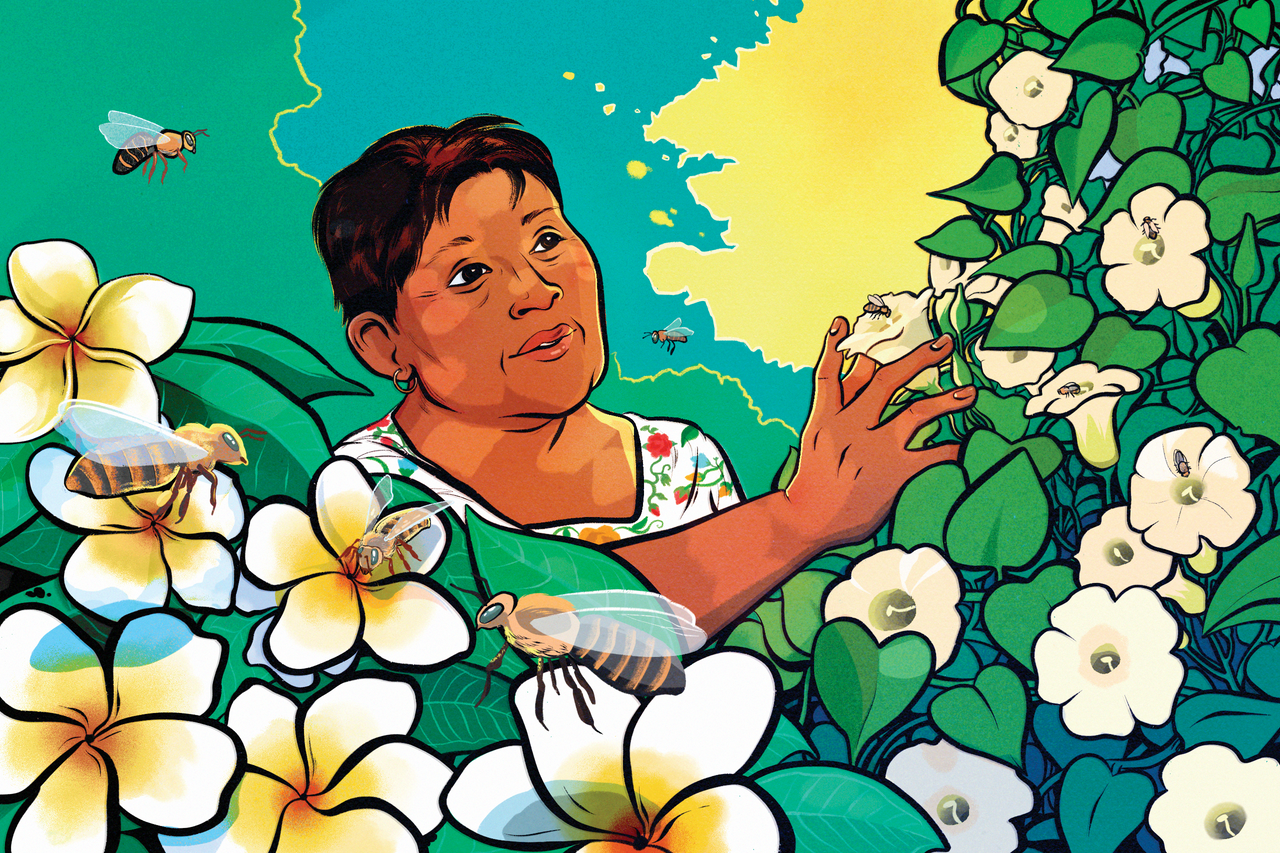 For Women’s History Month, Atlas Obscura’s Women in Conservation series celebrates women of science who are protecting our planet’s biodiversity in innovative ways.

For the Maya, the honey bee is more than an insect. For millennia, the tiny, stingless species Melipona beecheii—much smaller than Apis mellifera, the European honey bee—has been revered in the Maya homeland in what is now Central America. Honey made by the animal the Maya call Xunan kab has long been used in a sacred drink, and as medicine to treat a whole host of ailments, from fevers to animal bites. The god of bees appears in relief on the walls of the imposing seacliff fortress of Tulum, the sprawling inland complex of Cobá, and at other ancient sites.

Today, in small, open-sided, thatched-roof structures deep in the tropical forests of Mexico’s Yucatán Peninsula, traditional beekeepers still tend to Xunan kab colonies. The bees emerge from narrow openings in their hollow log homes each morning to forage for pollen and nectar among the lush forest flowers and, increasingly, the cultivated crops beyond the forests’ shrinking borders. And that is where the sacred bee of the Maya gets into trouble.

In 2012, the Mexican government granted permission to Monsanto to plant genetically modified soybeans in Campeche and other states on the peninsula without first consulting local communities. The soybeans are engineered to withstand high doses of the controversial weedkiller Roundup; multiple studies have shown exposure to its main ingredient, glyphosate, negatively impacts bees, including by impairing behavior and changing the composition of the animals’ gut microbiome. Though soy is self-pollinating and doesn’t rely on insects, bees do visit the plants while foraging, collecting nectar and pollen as they go. Soon, Maya beekeepers found their bees disoriented and dying in high numbers. And Leydy Pech found her voice.

A traditional Maya beekeeper from the small Campeche city of Hopelchén, Pech had long advocated for sustainable agriculture and the integration of Indigenous knowledge into modern practice. But the new threat to her Xunan kab stirred her to action as never before. She led an assault on the Monsanto program on multiple fronts: legal, academic, and public outrage, including staging protests at ancient Maya sites. The crux of the legal argument by Pech and her allies was that the government had violated its own law by failing to consult with Indigenous communities before granting the permit to Monsanto. In 2015, Mexico’s Supreme Court unanimously agreed. Two years later, the government revoked the permit to plant the crops.

As Pech saw it, the fight was not simply about protecting the sacred bee. The campaign was to protect entire ecosystems, the communities that rely on them, and a way of life increasingly threatened by the rise of industrial agriculture, climate change, and deforestation.

“Bees depend on the plants in the forest to produce honey,” she told the public radio program Living on Earth in 2021. “So, less forest means less honey, which means less money for families who keep bees. The killing of our bees has led to more poverty in our communities.”

The legal argument Pech and her allies used to take on Monsanto has already become a playbook for other Indigenous communities facing similar challenges. In 2020, Pech received the Goldman Environmental Prize—sometimes called the “Green Nobel”—for her fierce protection of the bees and the health of her community and its land. She now uses her voice to advocate for environmental causes throughout the Americas, and stresses that the fight is not over, even in the dense forests where her bees forage: Despite her group’s legal victories, she says the so-called “Roundup-ready” soy continues to be planted illegally in the region.

Pech, who described her calling as a beekeeper as “ancestral,” told Living on Earth: “Struggles like these are long and generational. And it’s our responsibility to involve our children and our grandchildren in our fight for justice. Because in the end, having land to call your own is having a sense of belonging.”

Lauded for her research on gentle giants of the sea, Andrea Marshall is using her fame to find hope for our troubled oceans.
bears

On the Coast of British Columbia, Ancient Stewardship Gets a Modern Spin

The world’s largest array of greenhouses has transformed the region economically, and in other, unforeseen ways.
Video • AO Docs

6:50
Want to see fewer ads? Become a Member.
From Around the Web
Atlas Obscura Trips
Layer by Layer: A Mexico City Culinary Adventure
View This Trip
Thanks for sharing!