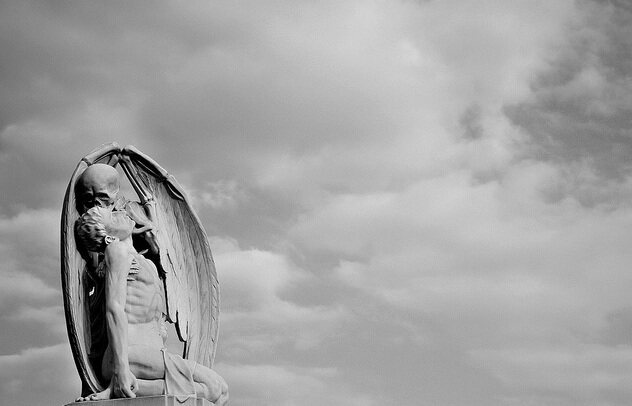 Roses are red, violet are blue

Valentine’s Day is done, wrapped up, flowers already showing signs of decay, and we’ll have to wait another year to be surrounded by heart-shaped pink things. But these romantic festivities won’t be complete until they are celebrated by Morbid Monday, our bi-monthly tradition which holds that a little twist of macabre is never too much, even if it’s a bit late. So this is the story of George Spencer Millet, an American teenager who we are celebrating as “the saddest valentine in the world.” His gravestone, erected in the Woodlawn Cemetery in the Bronx, is a monument to bizarre death, with a story so unusual that it needed to be carved in stone for posterity.

Located in the Lakeside section of the cemetery, the discreet-looking block of granite is almost invisible, lost in the vast necropolis, and you might need to ask one of the patrolmen to help you find it. Like many other tombstones, it is etched with the name of the deceased as well as the parents. “Georges Spencer Millet — Son of Cornelius J. and Carrie L. Millet.” But unlike any other gravestone, the front-facing side is also marked with this strange epitaph: 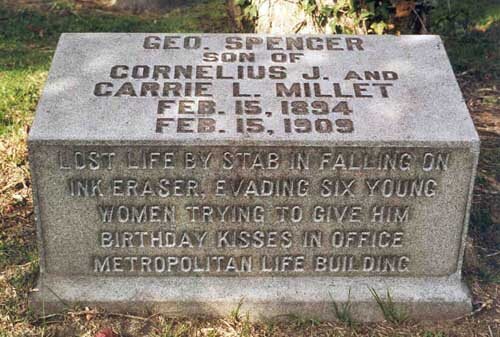 George Spencer Millet worked as office boy for a well-known insurance company in Manhattan, and the rather shy teenager enjoyed in spite of himself an enviable success with his female coworkers. A picture of him, published after the accident in the New York Evening Telegram, shows him as an Edwardian Macaulay Culkin, a radiant blond cupid with a naïve expression and a gentle, seraphic presence. George had yet another thing that made him even more adorable: he was born on the 15th of February, just a day after Valentine’s Day, a sweet and sour element for this quiet, grotesque tragedy.

1909 - To celebrate his 15th birthday, a pack of stenographers are said to have teased the young George with threats of a birthday kissing spree, promising to execute their love trap once office hours were over. Later that day, they struck, charging lips first at the golden-haired kid who, overwhelmed and panicked, dodged the furies and fell on the floor, crying “I’m stabbed” before he collapsed, unconscious in a pool of his own blood. Confused and shocked by the tragedy of a scene that began as a Benny Hill chase, the office members called an ambulance, but unfortunately George died on his way to the hospital. 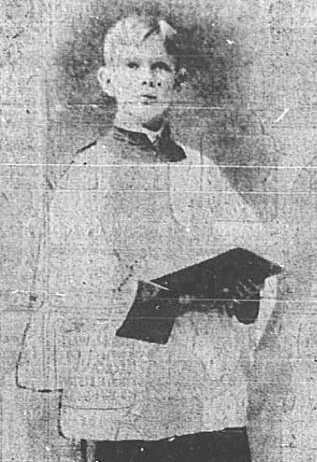 The story was published the next day in the New York press, with police opening a case to look into the circumstances of George’s death. The frolicking girls were investigated and one of them was even arrested for homicide and discharged shortly after due to the lack of evidence. The autopsy, conducted by a Dr. Lebane, the coroner’s physician, gave the final answer to this strange case. Cupid had died from his own arrow; the fatal wound was due to an ink eraser, a little knife shaped like a bloodletting instrument, that George had placed in his shirt pocket. During the episode, the ink eraser stabbed him right in the heart, and he died from hemorrhaging.

Curious Fact of the Week: The Longest Tapeworm