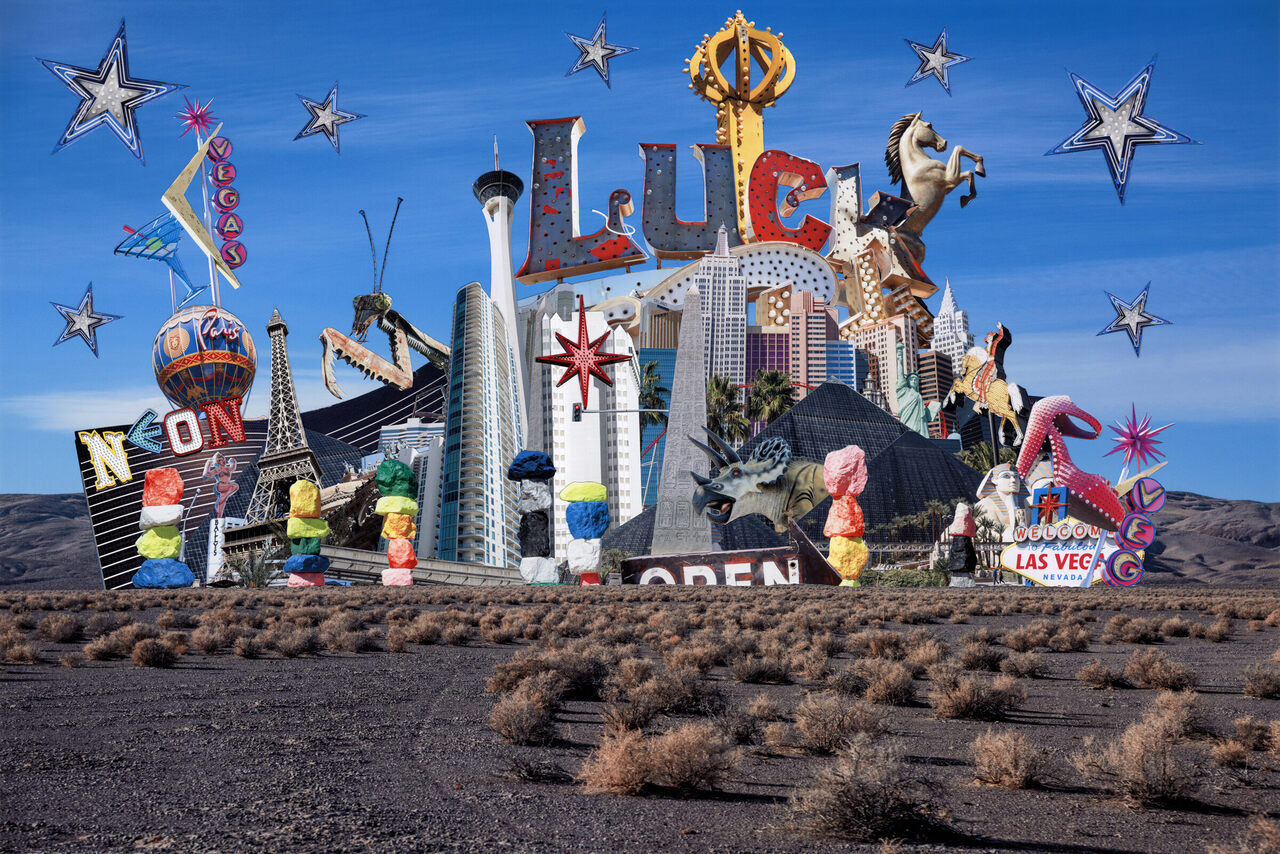 Sprouting from the desert brush, dinosaurs nudge post-modern pyramids. The Eiffel Tower and the Empire State Building topple. A cowboy waves and the Statue of Liberty salutes her torch. Neon signs overshadow world-famous works of art, and kitschy stars circle the scene like party decorations hung from the ceiling.

No single component of the scene is artificial, but none of them are quite real, either. The image above, titled Vacation Delirium, was assembled using photographs of sculptures and landmarks in Las Vegas, many of which themselves are recreations of natural phenomena, prehistoric beasts, and iconic monuments. Together, the elements combine to create, as the collage artist Francesca Berrini and the photographer Lindsey Rickert describe it, “an impossible postcard.”

Assembled by Berrini using original photography shot by Rickert and found ephemera, Vacation Delirium depicts the beginning of their journey on “The Fellowship of Highway 95.” Developed with TravelNevada, the state’s tourism board, the Fellowship offered two artists the chance to collaborate and create a body of work on a week-long trip up what’s known as Nevada’s “Free-Range Art Highway.” Over 400 teams applied, and Berrini and Rickert were chosen as our winners.

Beginning in Las Vegas, Highway 95 runs 400 miles north to Fernley. The highway’s nickname refers to the open-air artworks that dot its course, but “free-range” could just as easily refer to Nevada’s stance on its cultural treasures.

Las Vegas was the perfect muse for the first day of Berrini and Rickert’s journey. They describe their “impossible postcards” as a compression of time and memory that combine “photography, collage, and illustration into phantasmal dreamscapes.” The sentiment, if not its application, could just as easily apply to Las Vegas’ development since the 1940s.

When it opened in 1941, El Rancho Vegas was the first casino on what is now known as the Las Vegas Strip. Western-themed, it reflected America’s infatuation with gun-slinging paperbacks and movies. Plus, cowboys gambled. The casino cast the pastime as rugged, romantic.

El Rancho Vegas set a precedent. Ever since, entrepreneurs and industrialists have designed Las Vegas resorts and casinos to appeal to popular tastes of the time. For example, the now-demolished Stardust Resort and Casino was built at the dawn of the Space Race, and its eye-catching marquee ushered in an era of massive neon signs designed to appeal to the drivers who were busy embracing America’s growing car culture.

“If you do want to observe the changing, ever-shifting state of the American landscape, there’s still no better place to see it than the Las Vegas Strip,” as host Roman Mars put it on a recent episode of 99% Invisible, the acclaimed podcast focused on design and architecture. Berrini and Rickert’s Vacation Delirium captures the freewheeling, shape-shifting essence of Las Vegas better than any straightforward photograph could.

Humor is intrinsic to collage, as it is to Berrini’s work. In addition to creating fine art, Berrini also sells droll, old-fashioned postcards that ask us to consider questions such as, “What if early frontiersman had to face off against dinosaurs?”

Rickert tackles related themes in her photography. Staging scenes in her brain, she uses props, lighting, and elaborate analog camerawork to bring her tableaus to life.

Both women’s work straddles fantasy and reality. For the “Fellowship of Highway 95,” they chose to explore the postcard because of its relationship to authenticity.

“We’ve always thought that the humble postcard is the true analog mirror of the modern social media travel experience, with its idealistic, self-directed framing of a single moment in a journey,” Berrini and Rickert wrote in their proposal. “Postcard images invite you to suspend your disbelief and imagine yourself transported to a better, more interesting locale.”

The women began the first day of their trip collecting their own postcards at Container Park, a vibrant destination for shopping, dining, and entertainment constructed using sustainable modular cubes and actual shipping containers. Later on, they made their way to Seven Magic Mountains and the Neon Museum.

Ugo Rondidone’s Seven Magic Mountains is located about 10 miles south of Las Vegas. The Swiss artist’s vibrant artwork is made of candy-colored boulders stacked 30-feet-high. Upon arriving, Berrini was struck by the installation’s mass. Because they’re pastel-colored, she explains, they appear lighter in photographs.

First opened in 2016, the installation was originally slated to reside at its current site for just two years. But the artwork’s immense popularity has led organizers and the artist to consider extending Seven Magic Mountains’ stay.

The last stop of the day was the Neon Museum: a destination wholly dedicated to preservation. The facility includes a Neon Boneyard that stores retired Las Vegas signs. Rickert was similarly stunned by the size of these larger-than-life marquees. Single letters, once part of massive signs, towered over her.

Snippets of both of these places appear in Vacation Delirium, the assiduous assembly of which can be seen in a time-lapse video.

“The hustle and bustle opened into the vast Mojave Desert landscape,” Berrini wrote in the first day’s travel journal. “The mountains were no longer glimpses peeking out between buildings, they were surrounding us.”

Read on about Day 2 of Berrini and Rickert’s journey along Highway 95 here.

Atlas Obscura and TravelNevada are offering $10,000 for pair of artists to embark on a traveling fellowship along Nevada’s Highway 95.
Sponsored by TravelNevada
travelnevada

Francesca Berrini and Lindsey Rickert were inspired by Nevada's "unknown" on days three and four of "The Fellowship of Highway 95."
Sponsored by TravelNevada
Video • PinDrop

1:52
Sponsored by TravelNevada
Want to see fewer ads? Become a Member.
From Around the Web
Related

On day two of "The Fellowship of Highway 95," Lindsey Rickert and Francesca Berrini hit their stride as collaborators.
Sponsored by TravelNevada
Thanks for sharing!