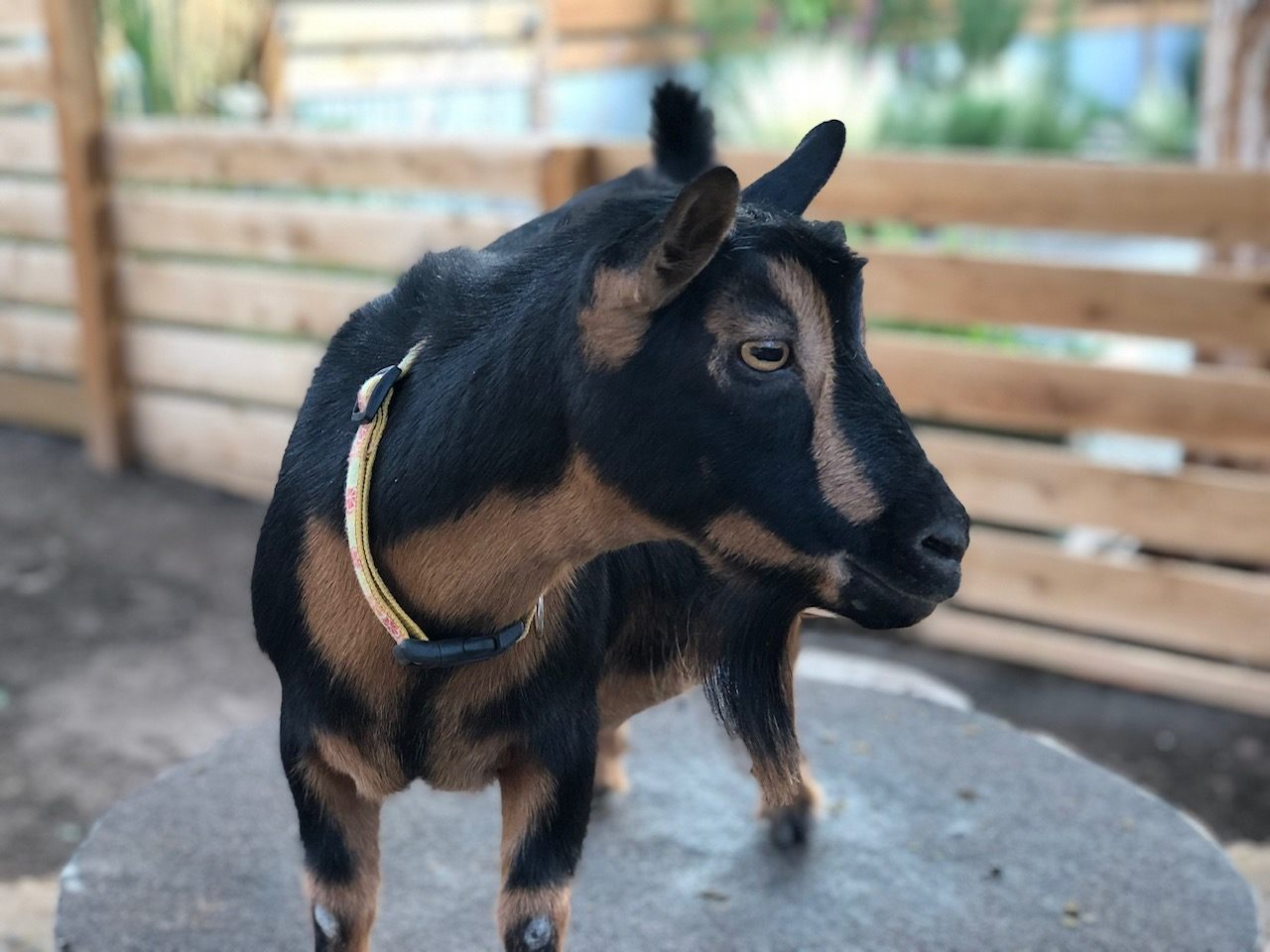 Until recently, Emily Scherer raised goats in the heart of Denver. They lived in a 33-foot pen on her quarter-acre lot. She used their manure to fertilize vegetable plants whose produce she sold at a stand in her front yard. One goat, she says, produced enough milk for her family of three.

Her goats were a special breed: the Nigerian Dwarf, ideal for urban farming.

“They’re my favorite animal,” Scherer says. “Goats don’t bark and they can live outside and their manure is actually useful.”

Fully grown, a Nigerian Dwarf goat is as big as a medium-size dog. The breed tops out at about 85 pounds, but many are 50 pounds or lighter. None are taller than two feet. First imported from West Africa in the 1930s, the breed has become one of the most popular dairy goats in America, kept in all 50 states. Nigerian Dwarf goats have a reputation for their small size, yes, but also their docility, friendliness, intelligence, blue eyes, coats that vary widely in pattern and color, and rich milk. For many urbanites and suburbanites with limited land, the breed brings the dream of backyard livestock within reach.

Critically, Nigerians don’t need much space. “Because of their diminutive size, they really don’t need a whole lot of pasture like you would for a cow, and that’s why they’re so popular with hobby farmers,” says Ann Alecock, show chair of the Nigerian Dairy Goat Association. “They’re more of a browser than a grazer.”

In many cities, the opportunity to raise goats is new, and not just because the Nigerian Dwarf has become readily obtainable only in recent decades. Many cities have legalized goats within the last 10 or 15 years. In Seattle, a watershed moment came in 2007, with a victory notched by Jennie Grant, founder and president of the Goat Justice League.

Back in the aughts, a neighbor reported Grant’s illegal goats. So Grant, who raises Nigerian Dwarfs crossed with other breeds, contacted her city councilman. Sure enough, the city soon passed a measure allowing for the keeping of small, hornless goats, such as the Nigerian Dwarf (though some Nigerian Dwarfs have horns). Other cities have seen similar grassroots efforts, some drawing from Grant’s book, City Goats, which covers topics including working toward legalizing goats in your community, milking, and cheesemaking. Today, miniature goats can be kept in cities across the country, including Phoenix, Austin, Pittsburgh, and San Diego.

Nigerians are one of two popular diminutive goats. The other is the pygmy, which is more often a meat goat. For its size, what really sets the Nigerian apart is its prolific production of fatty milk.

“Their milk components, protein and fat, are only rivaled by the Nubian [goat],” says Clare M. Staveley, a Western director of the American Nigerian Dwarf Dairy Association and a veterinarian who kept a herd of Nigerian Dwarf goats on Curbstone Valley Farm, near Silicon Valley, until recently evacuating with her goats due to wildfire. “With the right genetic selection, this breed can produce 1,200 to 1,700 pounds of milk [per year] on a modest diet.” In one day, a Nigerian doe can produce a few quarts of milk.

This milk ranges from 6 percent to 10 percent fat, which is excellent for cheesemaking, and one factor that drew Staveley to Nigerian Dwarf goats. Alecock, who keeps 50 to 100 Nigerian Dwarfs on 500 acres in Illinois, believes their milk is ideal for mozzarella and feta. She also makes a “Velveeta” that, when melted, she explains, has the consistency of queso.

Hayley Gillespie decided to raise Nigerians on her urban property, Art Farm Austin, after tasting mató, a Catalan cheese. “Once I came back from Spain after trying that cheese, I did some research, and that’s when I said I’m getting goats,” she says. She describes Nigerian Dwarf goat milk as rich and creamy, almost like half-and-half. She adds it to her coffee every day.

Her goats have become locally celebrated. “Everybody in the neighborhood knows that goats live here,” she says. “It has been a really amazing way to meet neighbors.” She trades milk and mató-style cheese to neighbors for homegrown produce, such as loquats, oranges, and tomatoes. The goats also enhance her small urban farm’s ecosystem. On fallow land and around her fruit trees, she spreads “a really heavy dressing of goat manure,” she says. “I definitely want to keep all that organic matter on the property.”

Recently, Scherer had to sell her goats when she got a new job. “They’re a lot of work,” she says. “The traveling factor is hard. It’s hard to find a house-sitter who’s goat-savvy.”

Still, Nigerians tend to be quieter and more agreeable than other goat breeds. “They’re sweet natured, good for kids, and very intelligent,” says Alecock. “I can go outside my milk parlor and just call a name, and they know it’s their turn to come to the milk parlor and they jump on the stand. When they’re done, they get an animal cracker and jump off, then I call the next one.”

When a leaf blows across her farm, Alecock says, “they all run after it—like it’s a potato chip or something.” A single herd can have goats of many different colors: black, white, chocolate, coffee, and seemingly every shade of brown, some goats with two or three colors. Patterning varies widely. It includes patches, stripes, moon spots, mottling, or some combination of these, or even just a plain solid color.

On top of their compost and dairy potential, Nigerian Dwarf goats, their owners often say, make great pets. “This breed is so gentle and sweet and small,” Gillespie says. “They have tons of individual personality. If you’re thinking about getting a dog, maybe get a goat instead.”

My Hunt for the Original McDonald's French-Fry Recipe

“It's a tribute to the cows.”
food

Alfonso Hernández Saguero is preserving an ancient way of life and its cherished foods.
music

For centuries, herdswomen have lured cows with haunting melodies.
Video • Wonder From Home