A Dictator's Nuclear Bunker Gets a Second Life as an Art Space - Atlas Obscura
Want to see fewer ads? Become a Member. 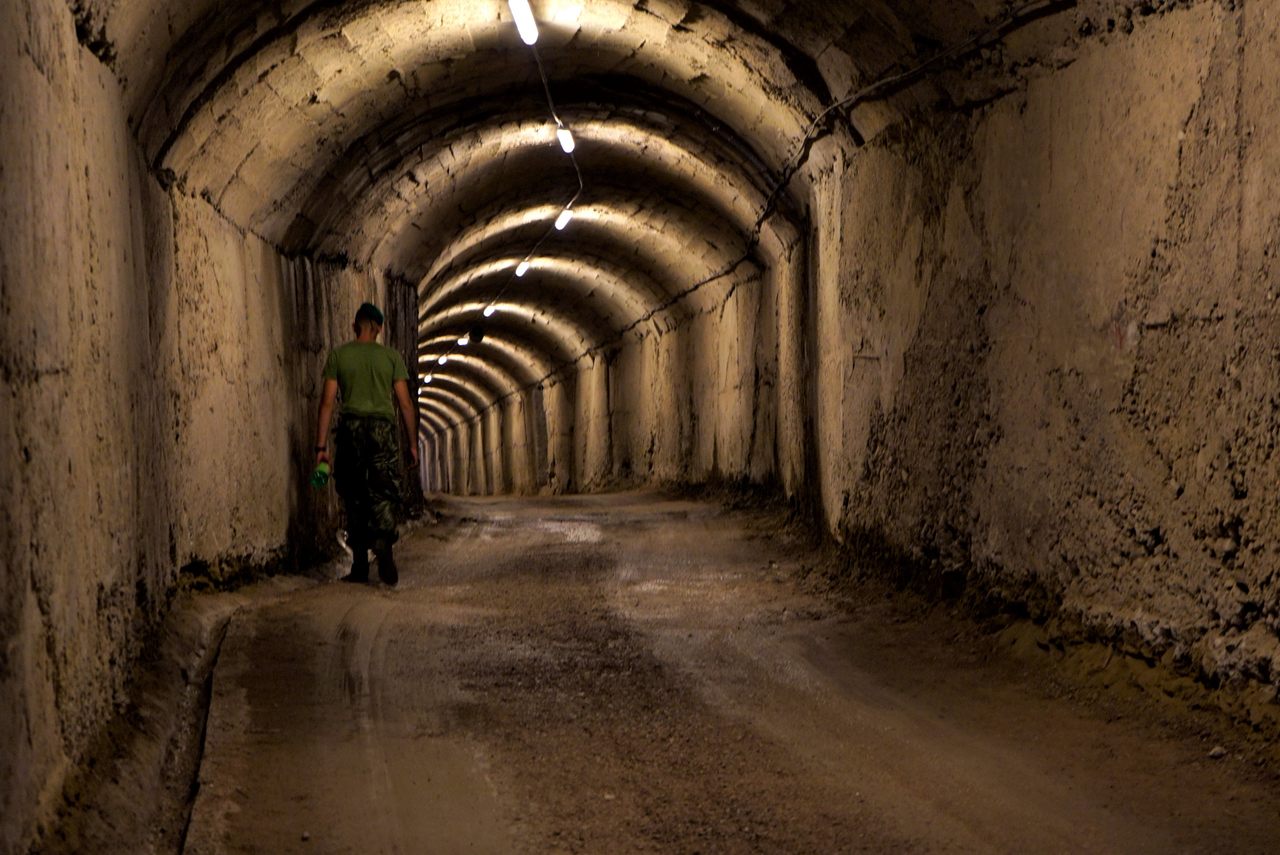 A 656-foot tunnel through Mount Dajti connects Tirana with the bunker entrance. All Photos by Pablo Esparza
In This Story
Destination Guide

A tunnel the length of almost two football fields separates the hustle and bustle of Tirana, Albania’s capital, from one of the country’s largest nuclear bunkers.

In the communist days, this five-story, 106-room bunker, located at the base of the one-mile-high mountain range that dominates Tirana from the east, was known as “Facility 0774.” Built in the ‘70s, it was designed to protect Albania’s communist dictator president, Enver Hoxha, and his government officers in the event of a nuclear attack.

This long-forbidden military facility was first opened to the public by the Ministry of Defence in 2014 during the celebration of the 70th anniversary of the country’s liberation from the Nazis. It remained open for just two months.

Now the bunker has been transformed into Bunk’Art, a cultural center that mixes contemporary art and history exhibitions about Albania’s tumultuous 20th century.

Non-profit organization Qendra Ura, an association founded in 2008 for the promotion of culture and artistic activities, runs the place, but the bunker itself is still owned by the Albanian state.

As Eva Haxhi, manager of Bunk’Art, puts it, “it is sort of an ‘artistic bunker’”.

In the early ‘60s, hardline Stalinist Hoxha broke relations with the U.S.S.R. after Moscow denounced Joseph Stalin. Under his command, Albania became one of the most hermetic states in the world.

Hoxha’s obsession with a potential foreign invasion led him to order the construction of some 700,000 bunkers around the country. Most of them were just small, egg-shaped concrete structures suitable only for one of two people. Many still dot the Albanian landscape.

The massive Bunk’Art bunker is different. It was a key part of Hoxha’s escape and resistance plan. Hoxha and his prime minister at the time, Mehmet Shehu, had their own apartments inside the bunker.  Each of them had a reception room for their secretary, an office, a bedroom and a bathroom. There was also a room for cabinet meetings, an intercommunications room and a chief officer’s room.

Many in Tirana still believe that a network of secret tunnels linked the bunker with the president and his ministers’ residences in the city center, three miles away. But regardless of how expansive the hidden infrastructure was, it didn’t end up being used. Hoxha died in April 1985 and his regime only managed to survive for a few more years. In the early ‘90s, Albania became a capitalist country: the long-feared foreign invasion did not occur and the bunker never served its original purpose.

The original facilities, though, are almost all intact today. All the furniture dates back from the bunker’s original era: the armchairs, the cracked maps of Albania, the Chinese-made air purifiers with red five-point stars on them. On Hoxha’s desk, an old radio plays one of his speeches on loop. His bed is still covered with a red bedspread.

On the sides of the corridors, rooms alternate art installations with history exhibitions about the hardship and repression in Hoxha’s Albania. One of the displays recreates a classroom of a primary school during the communist era. Another one highlights the importance of sport during those times. There, a bust of Enver Hoxha hangs in the net of a basketball basket. There is a place for nostalgia and irony at Bunk’Art.

The main room of the bunker, an assembly hall, has been transformed into a concert hall. From the walls, black-and-white portraits of Hoxha and other politicians of his time are forced to look at and listen to jazz—the music they banned for so many years.

Someone Is Driving Around With Too Many (?) Copies of 'Speed' on Their Dashboard