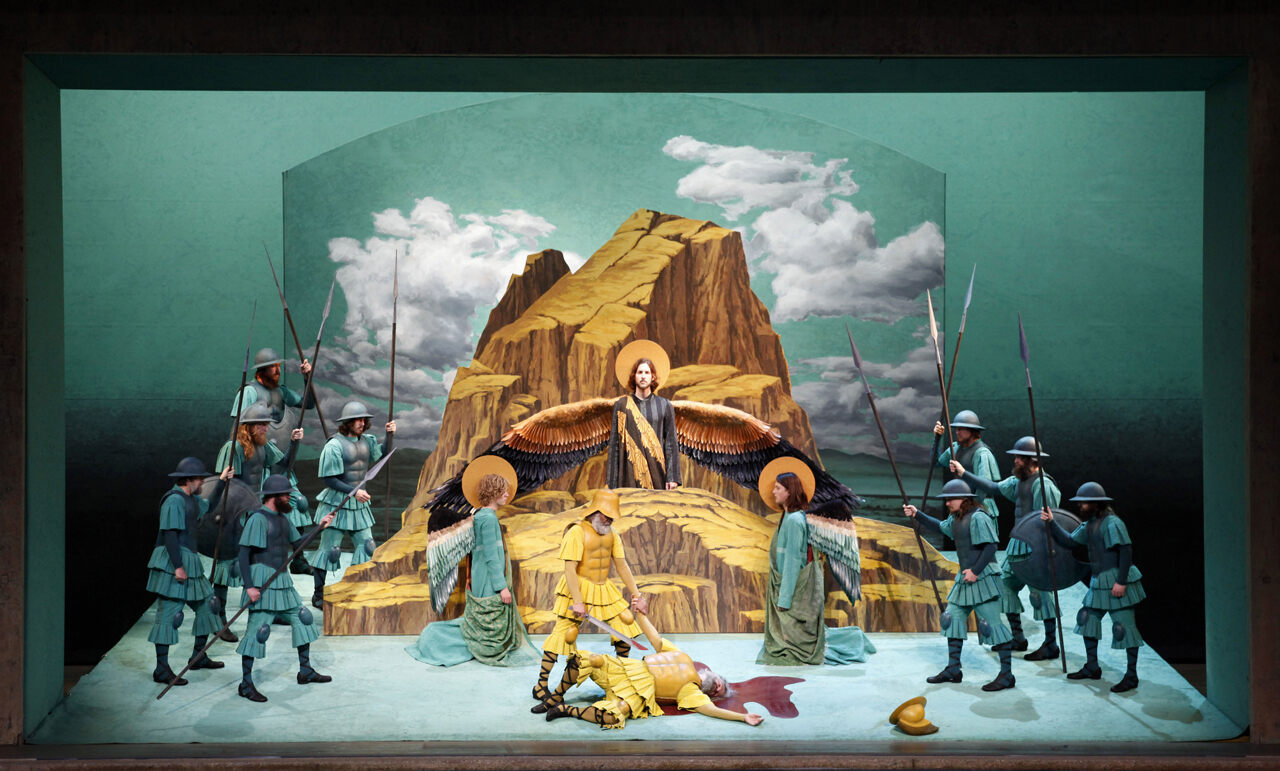 Residents of Oberammergau during a dress rehearsal of its passion play, on May 10, 2010. SEBASTIAN WIDMANN/AFP via Getty Images
In This Story
Destination Guide

In 1633, the black plague had descended on Europe, killing people by the thousands. In a tiny town in Germany, Oberammergau, the people turned to prayer in the time of crisis. Spare us, they prayed, and they would show their gratitude by putting on a play about Jesus. According to legend, from that day, no one else in Oberammergau died from the plague. So for the last 400 years the people of the mountain town have put on a passion play once every 10 years. It forms a huge part of their town’s identity today, even between the performances, from streets lined with wood-carving shops that make biblical figurines, to the biblical murals painted on many of its buildings. Since the late 19th century, Oberammergau’s performance has become a massive international spectacle, with half a million spectators from around the world when it is held. More than 2,000 actors take part in the play, and every other townsperson is somehow involved in the production. It’s become like a pilgrimage for some, and royalty, heads of state, and celebrities have all attended. It has been so popular that when representatives of the play did a U.S. tour in the 1920s, they stopped by the White House to visit Calvin Coolidge, who later wrote a letter to the director in thanks.

But the play has long been more complicated than a simple celebration of faith. Passion plays have traditionally been rife with anti-Semitism, and this one hasn’t been any different. The basic plot—the trial, suffering, and death of Jesus—is familiar to anyone who knows the New Testament, and in the 1600s, the Church had decided that blame for the death of Jesus should fall with the Jews. In Oberammergau, for instance, when the crowd demands that the Roman ruler of Jerusalem punish Jesus with death, hundreds of actors would shout, “His death be upon us and upon our children,” as a way of taking responsibility for his death on all Jewish people, past and present. Not only that, the people in the crowd were made to look like villains, including wearing horns (a traditional anti-Semitic trope).

In the 1930s, Adolph Hitler attended the passion play twice, and professed to its importance. When World War II ended, and both Germany and the world had to reckon with the Holocaust, the people in charge of Oberammergau’s play, including some who had been Nazis, didn’t want to change. To them, the play was inviolable.

Christian Stückl was one of the many children in Oberammergau who practically grew up in the play. He started rehearsing for his first performance, in 1969, when he was just seven. But at 14, he found a booklet at his grandparents’ house, sent by a Jewish organization, objecting to the anti-Semitism in the performance. So Stückl dug into the history surrounding passion plays. At 18, he visited Jerusalem to learn more about Jewish history. In 1986, when he was 25 and building a career as a director in Munich, Stückl decided to return home to try to get the position of director of the play. He succeeded, beating out a rival with a more traditionalist view.

That was where the real battles began. Since then, Stückl has walked a delicate tightrope, trying to change the play with each iteration while still maintaining support from the town, without which he wouldn’t have a cast or crew. He’s cast non-Catholics in speaking roles, which was banned before. When he hired the first Protestant actor, he received a threat and a petition signed by 1,800 people. But he persisted and he’s set about bringing other voices into the play. He invited some of its biggest critics, two rabbis from America, to come to town and engage in real dialogue about the play.

Underlying all of this is the age-old tension between stories of the past and the future that many imagine. The next iteration of the play was supposed to take place in 2020, and Stuckl envisioned the most inclusive, bridging passion play yet. But a plague has returned to Europe and the world, and Oberammergau’s long-running tradition has been postponed. The plan, for now, is that the show will go on in two years. What will it look like in a world that keeps changing? It’s hard to tell.

To learn more about how you get a town to change something that’s been at the core of its identity for hundreds of years, listen to Far Flung with Saleem Reshamwala (formally called Pindrop), a podcast produced by TED that travels around the world in search of surprising and imaginative ideas. You can find it on Apple Podcasts, Spotify, or wherever you listen to podcasts.

Savor the Sight of Comet NEOWISE From Some Wondrous Places

The tradition of building and preserving the sacred spaces is both art and science for the <em>sthapati</em> lineage.
festivals

The complex ceremonies continue, but likely without hundreds of thousands of devotees.
animals

6:12
Want to see fewer ads? Become a Member.
From Around the Web
Atlas Obscura Trips
Hidden Berlin: Exploring the City’s Abandoned and Underground Spaces
View This Trip
Thanks for sharing!