A Sift Through the Remnants of Iowa's Forgotten Fashion Scene - Atlas Obscura
Want to see fewer ads? Become a Member. 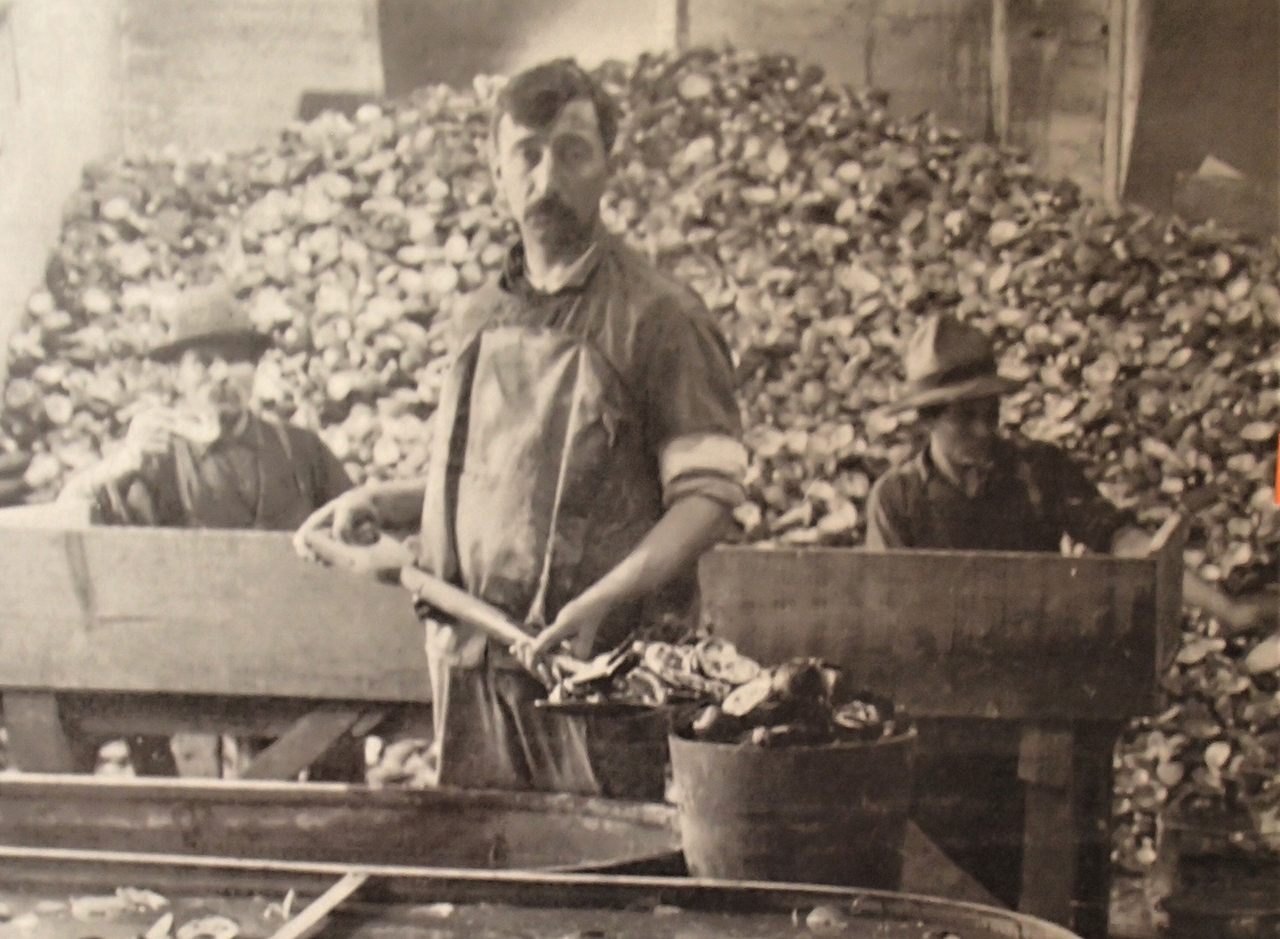 A man in the Muscatine shell-soaking room, about 1915. All photos courtesy The National Pearl Button Museum
In This Story
Destination Guide

Clusters of clam shells lie on the banks of the Mississippi River in Muscatine, Iowa. Look closely and you’ll see each shell is dotted with perfectly neat holes. Many decades ago, these shells were plucked from the bottom of the river by the ton, soaked, steamed, and swept of their meat and pearls. Circular saws cut multiple discs out of each shell. These were called “blanks.” Each blank was sanded down into a perfect pearl button, ready to be sewn onto a dress, jacket, or glove.

Muscatine’s pearl button industry hit its peak between 1908 and the ’20s, when factories in the Iowa town produced 1.5 billion buttons, or one-third of the world’s pearl button supply. These buttons were worth $3.3 million, according to the 1910 edition of Encyclopaedia Britannica. But few of us who grew up along the Mississippi, who’ve held those milkweed-grey shells with holes in them, have actually held pearl buttons or heard a cohesive origin story about the industry. To get the definitive history I went to Terry Eagle, the Director of The National Pearl Button Museum at The History and Industry Center, in Muscatine. “The story of the pearl button is a national growth story, a national treasure story, and an environmental lesson,” Eagle says. “And if you don’t believe me now, I’ll prove it to you.”

As a kid, Eagle grew up hating the hole-filled shells leftover from the pearl button industry because they wouldn’t skip across the Mississippi. He used to work at the Muscatine Fire Department, where, at least three times a week, a parent would bring in their kid, who had their finger stuck in the holes of the blanks of the shells. “They were thought of as a navigational hazard, you couldn’t walk the Mississippi without cutting your feet,” Eagle says, “but Boepple saw the value in these seemingly worthless clams.”

That would be German button artisan John F. Boepple. In 1890, he came to the United States because a new German tariff on imported oceanic mother-of-pearl left him little room for profit. Pearl buttons were Boepple’s best sellers. He made buttons out of wood, bone, horn, and hoof, but they didn’t fly off the shelves like the pearl versions.

An acquaintance from the U.S. sent Boepple a mollusk from the Mississippi with “bark,” or an exterior that was milkweed grey. Inside the freshwater shell, Boepple found high quality freshwater mother-of-pearl, which resembled the high-quality oceanic pearl that Boepple used prior. Mollusk shells are coated with an opalescent substance called nacre. When an irritant like sand or rock gets inside the mollusk, the creature will coat the irritant with nacre and potentially produce a pearl.

“Clams and mussels will position themselves toward the current so they can gather nutrients brought downriver,” Eagle says. Boepple took out his map of the United States, saw the bend in the Mississippi by Muscatine, knowing the river slowed down in that area and with his knowledge of the bottom feeder, hypothesized the Iowa town’s waters would be carpeted with clams and when he waded into the water and pulled up a mussel the size of a baby elephant’s ear, the hypothesis was correct.

In 1895, after gaining investors and opening his first pearl button factory, Boepple hired shell miners called clammers. As the industry grew, clammers mined rivers of 19 states around Iowa along the Mississippi. In shallow waters, they’d “pollywog” alongside their boats, bravely feeling for clams with the bottoms of their bare feet. In deeper water, they’d take out an iron chandelier structure with crowbars and hooks to rake the bottom of the river. Once the hooks touched their open mouths, the clams slammed shut in a millennia-old defense mechanism.

To kill them, the clammers put the shells in vats of hot water. They swept the meat, searching for pearls, before chucking the insides back into the river or into a bucket for fish bait, if their find was unsuccessful. “No one ate the muddy meat, because it wasn’t palatable,” Eagle says. Farmers worked as clammers to supplement their income; they initially used the clam meat as fertilizer and feed for their livestock, until they found out that feeding livestock mussel made their meat taste like the Mississippi. In Iowa there’s a saying: “The smell of money smells like pig shit.” Back then, in Muscatine, money smelled like rotting fish.

The shell buyers brought the wholesale shell to the button factories and loaded them into the soaking room. Here, “men shoveled shell into large livestock troughs, soaking them for at least a week,” according to Melanie K. Alexander’s Muscatine’s Pearl Button Industry. The soak softened the mussel’s shell enough for it to be drilled into without splintering. Yet a jet of water was still needed to cool the shell to limit the dust. The circular saw cut into the shell and produced coin-like pieces of shells called blanks. An expert cutter could get several blanks out of one piece of shell, though different sized shells produced different sized buttons. The average button cutter went through about 100 pounds of shell per day, producing around 3,600 blanks. The blanks were reclassified by size and taken to the finishing floor, where women sanded them on emery wheels. They’d bring the buttons home to sew onto cards, earning one cent for every five cards they made.

By 1908, Boepple’s business was booming. But competition was on the horizon. The advent of machinery electric motor prior to 1910, created an industrialized button trade to replace Boepple’s people-powered one, and caused the button boom around Muscatine. McClure’s Magazine wrote in 1914 that “Muscatine was button mad.” Boepple was an artist, not a businessman, and other button factories put him out of business around 1909. Still, barges and railroad cars full of shells continued to flood into Muscatine, the Pearl Button Capital of the world.

The pearl button industry was composed of 19 American states whose streams and rivers supplied shell. In the late 1930s and ’40s, clammers at rivers in the center of the U.S. started reporting a scarcity. The large shells had disappeared. They couldn’t even find smaller shells to blank smaller buttons. A whole workforce would collapse if the shells were gone entirely.

To combat this dire possibility, the federal government set up the Fairport Federal Hatchery biological station in Muscatine to re-seed the rivers by inoculating fish with mussel larvae.

Boepple spent hours bent over the water watching these animals and logging their behaviors. One day in 1912, wading through the Mississippi, he split his heel on a sharp clam. He contracted a blood infection and died shortly after in Bellevue Hospital in Muscatine on January 30, 1912. Muscatine’s mayor asked all of the button companies and other businesses to close shop during Boepple’s funeral. The true irony doesn’t lie with Boepple dying from stepping on the shell of a clam, but in why he waded through the river. The man who perfected the process of creating the pearl button wasn’t taking from the river; this time he intended to bring the mollusk back.

Soon after, the invention of plastic, bolstered by WWII, introduced commercial grade plastic accessories and zippers, sending the pearl button into decline. Pearl buttons couldn’t keep up with modern washing machines, detergents, and dry cleaners like plastic could. “In the ‘50s you couldn’t sell a pearl button,” Eagle says. “Warehouses full of pearl buttons were thrown away in dumps.”

Before Boepple immigrated to the U.S., the entire Mississippi mussel population was untouched; possibly the cleanest it was ever going to be. The river had over 300 species of mollusks before Boepple and only 200 after. He made the mother-of-pearl from mussel and clams a national resource through pearl button production. And the pearl button industry provided employment, keeping families fed during the Great Depression. The pearl button and the hole-drilled shells they leave behind are symbols of humanity’s fumbling balance between resource-based-industries and overlooked species conservation techniques.

“The pearl button industry was no different than the Chicago meat packing plants, the Pittsburgh steel, textiles, coal, the cotton,” Eagle says. “All the machinery invented back in those days were invented for production. Nobody had safety on their mind back then. God bless America, we got better. Polish this history like a pearl and people will come and hear about it.”

In Guna Yala, indigenous women sew stories of legend, revolution, and even Minnie Mouse into the elaborate textiles known as molas.
islands

The aloha shirt has many possible inventors and a long, fraught cultural history.
ruins

Century-old traces of a bygone resort are starting to surface at Castlewood.
fashion

A 19th-century style guide displays the diversity of an empire.
Want to see fewer ads? Become a Member.
From Around the Web
THE GASTRO OBSCURA BOOK
Taste the World!
An eye-opening journey through the history, culture, and places of the culinary world. Order Now