When Squirrels Were One of America's Most Popular Pets - Atlas Obscura
Want to see fewer ads? Become a Member. 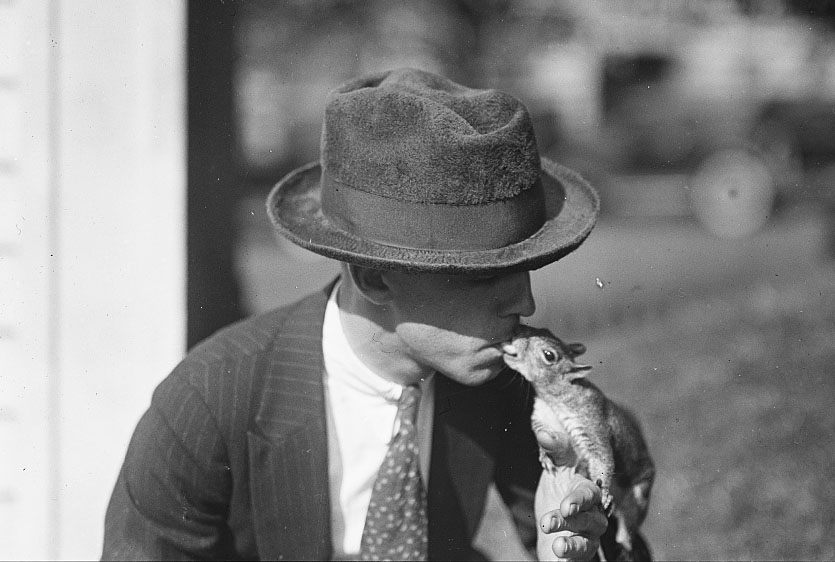 Pete the squirrel, who was a pet of President Harding. Library of Congress/LC-DIG-hec-42488

In 1722, a pet squirrel named Mungo passed away. It was a tragedy: Mungo escaped its confines and met its fate at the teeth of a dog. Benjamin Franklin, friend of the owner, immortalized the squirrel with a tribute.

“Few squirrels were better accomplished, for he had a good education, had traveled far, and seen much of the world.” Franklin wrote, adding, “Thou art fallen by the fangs of wanton, cruel Ranger!”

Mourning a squirrel’s death wasn’t as uncommon as you might think when Franklin wrote Mungo’s eulogy; in the 18th- and 19th centuries, squirrels were fixtures in American homes, especially for children. While colonial Americans kept many types of wild animals as pets, squirrels “were the most popular,” according to Katherine Grier’s Pets in America, being relatively easy to keep.

By the 1700s, a golden era of squirrel ownership was in full swing. Squirrels were sold in markets and found in the homes of wealthy urban families, and portraits of well-to-do children holding a reserved, polite upper-class squirrel attached to a gold chain leash were proudly displayed (some of which are currently at the Metropolitan Museum of Art). Most pet squirrels were American Grey Squirrels, though Red Squirrels and Flying Squirrels also were around, enchanting the country with their devil-may-care attitudes and fluffy bodies.

By the 19th century, a canon of squirrel-care literature emerged for the enthusiast. In the 1851 book Domestic pets: their habits and management, Jane Loudon writes more about squirrels as pets than rabbits, and devotes an entire chapter to the “beautiful little creature, very agile and graceful in its movements.” Squirrels “may be taught to jump from one hand to the other to search for a hidden nut, and it soon knows its name, and the persons who feed it.” Loudin also waxes on their habits, like jumping around a room and peeping out from wooden eaves, writing that “an instance is recorded of no less than seventeen lumps of sugar being found in the cornice of a drawing-room in which a squirrel had been kept, besides innumerable nuts, pieces of biscuit.” Loudon’s advice: when your squirrel is not running around the room, provide it with a tin-lined cage that has a running wheel.

Leisure Hour Monthly, meanwhile, in 1859, advised to feed it “a fig or a date now and then,” and that you should start your squirrel-raising adventure with those procured “directly from the nest, when possible.” The unnamed author’s own pet squirrels, Dick and Peter, had the freedom of his bedroom and plenty of nuts to store away. “Let your pet squirrels crack their own nuts, my young squirrel fanciers,” the author wrote.

While many people captured their pet squirrels from the wild in the 1800s, squirrels were also sold in pet shops, a then-burgeoning industry that today constitutes a $70 billion business. One home manual from 1883, for example, explained that any squirrel could be bought from your local bird breeder. But not unlike some shops today, these pet stores could have dark side; Grier writes that shop owners “faced the possibility that they sold animals to customers who would neglect or abuse them, or that their trade in a particular species could endanger its future in the wild.”

Keeping pet squirrels has a downside for humans too, which eventually became clear: despite their owners’ best attempts at taming them, they’re still wild animals. As time wore on, squirrels were increasingly viewed as pests; by the 1910s squirrels became so despised in California that the state issued a widespread public attack on the once-adored creatures. From the 1920s through the 1970s many states slowly adopted wildlife conservation and exotic pet laws, which prohibited keeping squirrels at home. Today, experts and enthusiasts alike warn that squirrels don’t always make ideal pets, mainly because of their finicky diet, space requirements, and scratchy claws.

None of this, of course, will deter the most determined squirrel owner. Fans of Bob Ross might remember his pet squirrel named Peapod, and some squirrels owners are rekindling the obsession by making their pets Instagram-famous. Still, wild squirrels surely agree—it’s probably best we’re now mostly leaving them to the forest.

In Fast-Changing Seattle, an Effort Not to Forget the Past

The Average Gray Squirrel Is Surprisingly Good at Problem Solving

Squirrels Organize Their Nuts to Make Them Easier to Remember

Mixed nuts are for amateurs.
wwi

In 1918, California Drafted Children Into a War On Squirrels