What the Heck Is a Pneumonia Front? - Atlas Obscura
Want to see fewer ads? Become a Member. 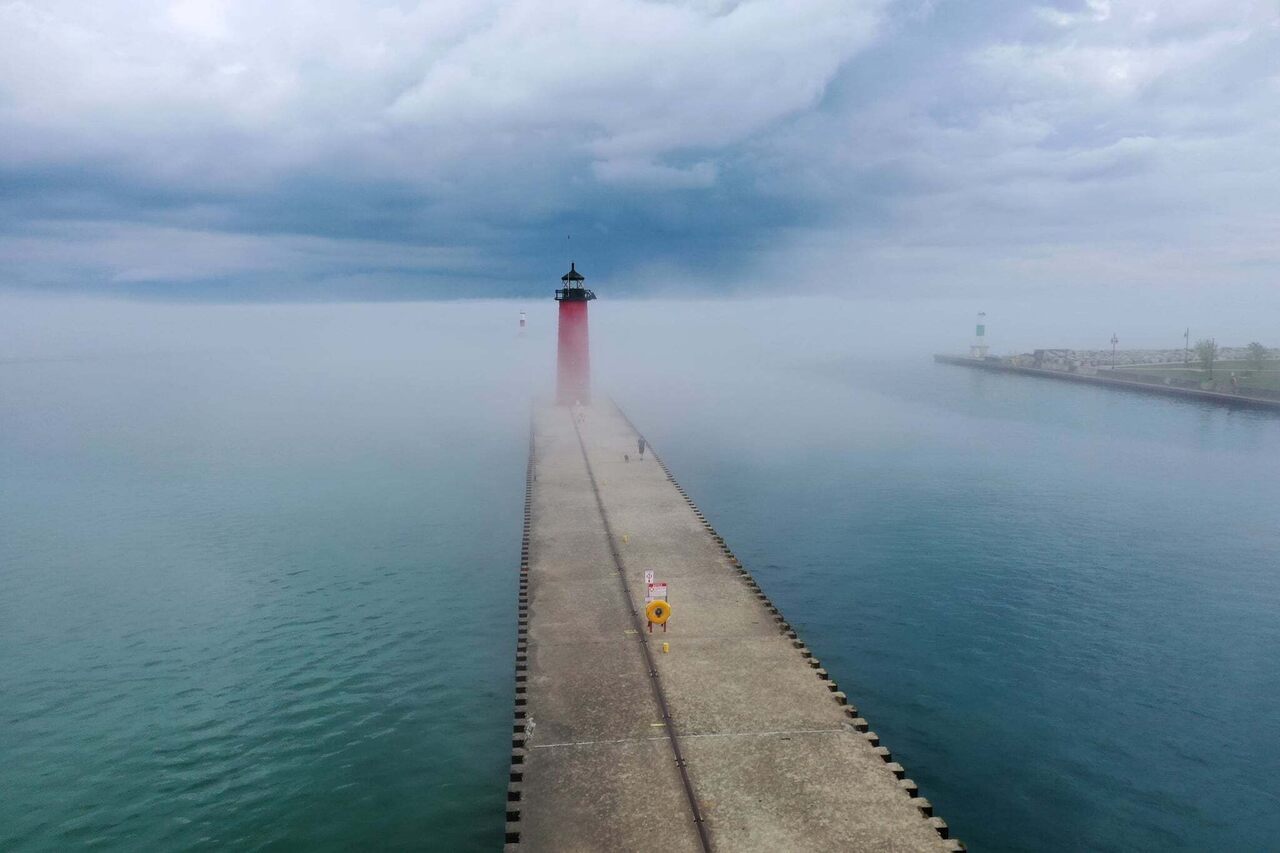 On May 23, 2021, atmospheric fog and clouds accompanied a pneumonia front in Kenosha, Wisconsin. Courtesy View From Above-Wisconsin
In This Story
Destination Guide

It’s a late spring afternoon along the southwestern coast of Lake Michigan, and people from Chicago to Milwaukee are out enjoying the sun after another long Upper Midwest winter. The temperature creeps up to 80 degrees Fahrenheit, and continues to climb, unseasonably. The promise of an early summer lures out gardeners, cyclists, and beachcombers. Then, it happens.

A wall of cold lake air slams into the coast and moves rapidly inland. People scramble for shelter, or at least a sweatshirt. The temperature plummets 20, 30, even 40 degrees in minutes. Winter returns with a vengeance.

It’s not the opening scene of a horror movie. It’s a pneumonia front, a rare weather phenomenon that is unique to this corner of the Great Lakes and still not fully understood by scientists. The event has nothing to do with actual pneumonia: It’s an entire region getting a sudden case of the chills.

Lake Michigan, like the other Great Lakes, is large enough to act as an inland sea, generating its own weather patterns, including wind. Anyone who has lived beside an ocean has experienced a stiff sea breeze, but pneumonia fronts are something else. “It’s much more drastic,” says Tim Halbach, warning coordination meteorologist for the National Weather Service’s Milwaukee/Sullivan Office. “It’s an extremely abrupt change.”

The term “pneumonia front” is not officially recognized by the National Weather Service. Halbach says it was coined by “somebody clever” in the Milwaukee office back in the 1960s to explain the unusual local phenomenon. The accepted definition is a drop of at least 16 degrees Fahrenheit within an hour, though many pneumonia fronts are more extreme. On May 3, 2020, Milwaukee recorded a tumble of 24 degrees in less than 15 minutes—including a drop of 14 degrees over a mere five minutes.

Pneumonia fronts can seem otherworldly. While they are sometimes heralded by fog, or a low shelf cloud, they can also happen on a clear day, and may or may not be accompanied by wind. “It’s not like a hurricane, or a wall of water,” says Halbach. “It’s hard [to visualize] because it’s, like, cold air.” Remember on Game of Thrones, when an entire landscape froze ahead of the show’s undead villain? “That would be like a pneumonia front, when the Night King comes in and everything changes drastically,” Halbach says.

“It means that the front is coming in from a northeast direction,” says Wachs. “Usually cold fronts come in from the west or northwest. If the backdoor cold front is strong enough, a 16-degree drop or greater in one hour or less, then it is considered a ‘pneumonia front.’”

Wachs adds that, while models have improved, pneumonia fronts can be challenging to forecast. “Pneumonia fronts are usually more difficult to predict because [they’re] smaller in scale than, say, a big blast of Canadian air coming down, impacting several states,” he says. “For pneumonia fronts, the impact is only a few counties.”

Paul Roebber, distinguished professor of atmospheric sciences at the University of Wisconsin-Milwaukee, says pneumonia fronts shouldn’t be considered cold fronts at all. “It’s physically what’s called a density current, and that’s very different from what we would term a synoptic- [or large-] scale cold front,” he says.

Exactly how pneumonia fronts are generated remains something of a mystery. Given their localized and relatively rare nature—they typically occur only once or twice a year—they are difficult to study. Lake Michigan’s long, deep shape and north-south orientation appear to be key to their creation. Chilly air that builds over the lake in winter tends to remain there well into summer, even as air over land warms.

The setup for a pneumonia front requires warm air parked over land, with a more typical cold front approaching the lake from the north and encountering the cold air that has collected over the lake.

“You’ve got this dome of cold air piled up over the lake. It’s not doing anything. It’s just sitting there,” says Roebber. The approaching cold front “taps into the cold air supply over the lake (and) the whole thing just roars down over the coastline of Lake Michigan and comes inland.”

Because of larger-scale currents and the momentum of the pneumonia front—imagine a snowball rolling downhill—the wall of cold air swings into the southwest coast, though the lake’s southern end, including a small portion of Indiana, is sometimes affected. “If that cold air supply hadn’t been there, if you filled in Lake Michigan or covered it over with a big swimming pool cover or something, then that cold front would just kind of meander down like normal,” Roebber adds. “It’s because the cold front is tapping into the cold air dome over the lake that makes it go much faster and be much more dramatic.”

But not every encounter between a cold front and Lake Michigan’s dome of cold air turns into a pneumonia front. “There’s some sort of trigger,” says Roebber, who worked with a student several years ago on a model of the elusive phenomenon. Unfortunately, he says, “We weren’t able to figure out why it kicks off when it does.”

Atmospheric scientists also aren’t sure what impact, if any, climate change may have on the frequency and intensity of pneumonia fronts. “They tend to happen more commonly in late spring than in summer. The reason for that is the lake temps are colder so you have a better cold air supply,” says Roebber. “So, with climate change, if we expect the Great Lakes generally to be warmer, because the air is warmer and ice cover in winter is less, they would probably be less frequent.”

Roebber cautions, however, that while climate change may push temperature means higher, it may also create greater variability, and more extreme swings. That could actually lead to more of the unique weather phenomenon. In the final days of May, the Milwaukee area experienced two pneumonia fronts in four days. Keep that sweatshirt handy.

A different process than evaporation, sublimation turns snow and ice directly into a gas.
lakes

The revival of Lake Menindee is the latest chapter in a battle over water management, environmental protection, and indigenous rights.
glaciers

3:07
Want to see fewer ads? Become a Member.
From Around the Web
Travel With Atlas Obscura
Are you a curious traveler?
Join local experts in 50+ destinations for a once-in-a-lifetime journey.
View Our Trips
Thanks for sharing!