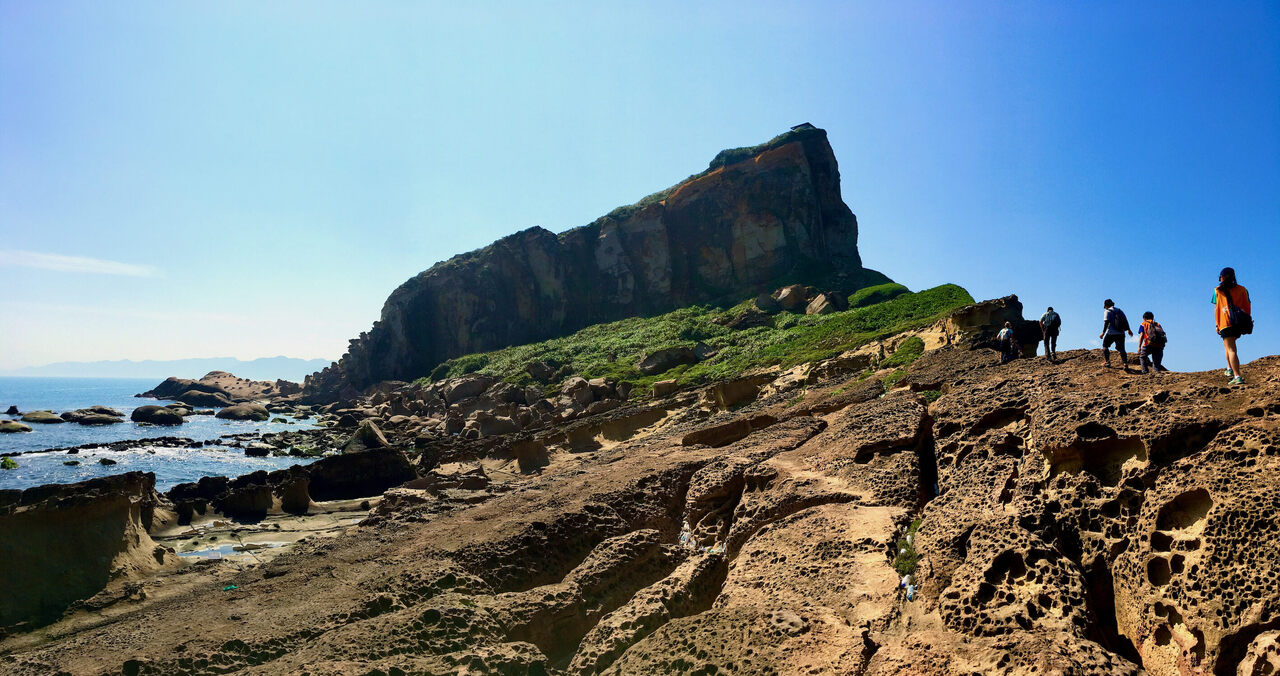 Today, Yehliu Geopark looks out over the water. Millions of years ago, the burrows were underwater lairs. Courtesy Masakazu Nara
In This Story
Place

More than 20 million years ago, off the coast of what is now northern Taiwan, a marine creature tunneled vertically in the seafloor sand, then veered to the side. Every now and then, the animal—probably a skinny, sprawling, ancient worm—jutted its head above the sediment, snatched some prey, and dragged the unwitting morsel into its warren.

Presumably, the creature feasted again and again, until it eventually died. When it did, its body wasn’t preserved—water, time, and predators can all be cruel to soft tissues. Though its body has vanished, scientists can begin to decode the story of its life thanks to evidence of its ambushes.

The planet is covered in evidence of creatures making their way across it, from dinosaurs traversing ancient shores to dogs padding through newly poured concrete. These records are types of trace fossils—snapshots of long-ago (or not-so-long-ago) activity that persist in the absence of physical remains. And it’s not just above the waves that they exist. The marine creature’s burrows were preserved in sand that eventually became rock—rock that Ludvig Löwemark, a geoscientist at National Taiwan University, and Masakazu Nara, a geologist at Kochi University in Japan, encountered in 2013. When Yu-Yen Pan began her master’s work in geosciences at National Taiwan University in 2016, Löwemark suggested that she take a closer look at the fossils.

A team of researchers, led by Pan and including Löwemark, Nara, and five others, describes its findings in a recent paper in Scientific Reports. The team studied more than 319 burrows, most of which were fragments. By examining them in aggregate, the scientists were able to conclude that they composed a single kind of burrow, roughly an inch in diameter and six-and-a-half feet long. “We rarely could observe more than a small part of the trace fossil, the other parts being either already eroded away or still hidden in the rock,” Löwemark says. The researchers got a 3D look with the help of a rock cutter and computer tomography. The burrows start as straight chutes and then swoop sideways until they’re nearly horizontal.

While trace fossils offer tantalizing glimpses into the past, they can be slippery scientific collaborators. If the impression is clear enough, describing the shape, or morphology, might be pretty straightforward. Go beyond that—trying, for example, to make inferences about the creature that made it and how it lived—and the picture gets murkier. “Linking morphology to behavior is the hardest part,” says Pan, now an Earth science student at Simon Fraser University. Trace fossils can suggest how animal communities organized themselves or moved through the world, and maybe even how quickly they strutted or moseyed, but little about anatomy, beyond what touched the material in which the fossil was preserved. So trying to determine who, exactly, was responsible for a track, burrow, or other trace fossil can be exceedingly tricky. “It is extremely rare, but not impossible, to confidently attach trace fossils to the trace-maker species,” says Carl Mehling, a senior museum specialist in paleontology at the American Museum of Natural History in New York, who wasn’t involved in the research.

Pan and her collaborators drew upon a patchwork of evidence. With insights about the sediment and the surrounding geochemistry, they were able to winnow down the list of creatures that could have made the burrow. Shrimp and bivalves also burrow, the authors write, but the researchers concluded that neither was responsible for this particular trace fossil. Crustaceans’ burrows are more complex and maze-like, while the cavities carved by bivalves are likely to have a cross-section shaped more like an almond or keyhole, not a circle.

Coauthor Shahin Dashtgard nudged Pan to consider that the fossil could have been made by a predatory polychaete worm, possibly a relative of the present-day sand striker (often unfortunately called the Bobbit worm), which famously retreats into its burrow with its thrashing prey. The researchers found feathery marks near the funnel-shaped opening, which probably point to signs of prehistoric struggles, Pan says, with prey scrambling to escape as the predator yanked it into the chamber and sediment collapsed on top of them. Those details, coupled with iron deposits found on the upper portion of the burrow (likely from mucus seeping from the creature’s body, which helped prop up the tunnel and concentrated near the opening as the creature thrust itself out again and again) made the notion of a polychaete creator seem plausible.

But it’s hard to get much more specific with any real certainty. While the opening and upper portion of the trace fossil burrow look similar to the burrows of present-day sand strikers, Löwemark notes that scientists don’t know that much about what those worms are up to deeper underground. That knowledge gap makes comparisons difficult. “If we could see the modern worms’ burrows, it would be fantastic,” Pan adds. “But it’s really, really hard.” The researchers aren’t counting out other animals that practice similar ambush maneuvers. For now, they know enough to name the burrows themselves—Pennichnus formosae—but not to definitively attribute the specimens to a specific species.

This spring, an exhibition about the burrows, and trace fossils more broadly, will go on display at one of the field sites, Taiwan’s Yehliu Geopark. (Pan crafted the exhibit herself, using Styrofoam, sand, glue, and more to build a model of the burrows, which she arranged in a little cabinet of curiosities.) Trace fossils have many more stories to tell about prehistoric tussles and tangles. The rock record is “a kind of book,” Löwemark says. Attentive readers can track plot lines from the distant past, and “understand how different animals interacted with each other millions of years ago.”

The country's extensive fossils include early ancestors of whales, the largest mammals on the planet.
forests

Decades of work has revealed a "megadiverse" ancient landscape in northern Peru that was destroyed in a volcanic eruption.
dinosaurs