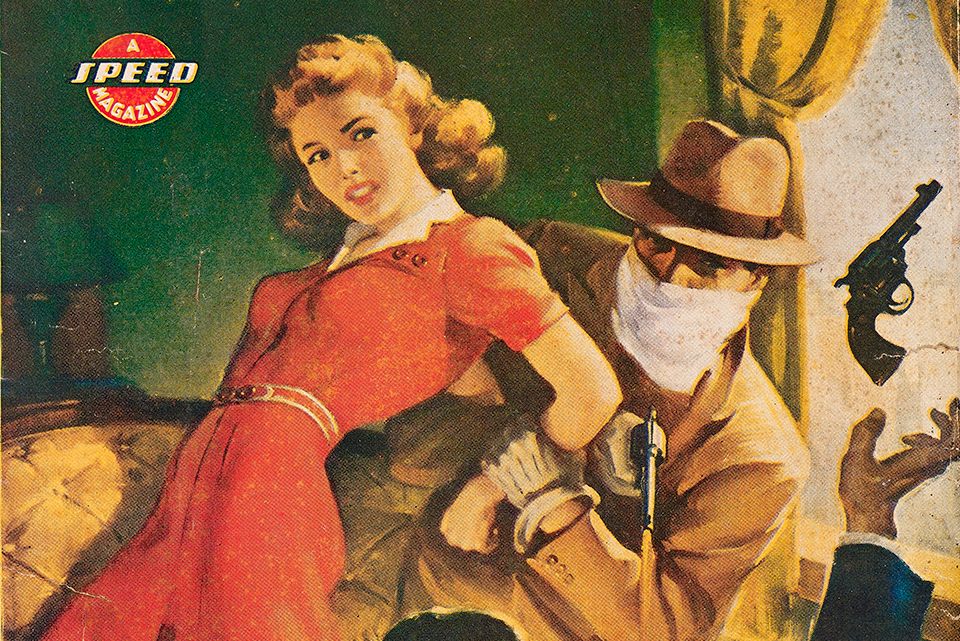 From late 1800s to the 1950s, pulp magazines and books offered a seemingly endless churn of detective stories, adventure capers, crime dramas, Westerns, and science fiction tales. Cheaply priced and printed on low-quality wood-pulp paper—hence the name—these publications were as “pulpy” as could be: mass-produced, of questionable quality, and easily digestible. They were also disposable, titillating, and hugely popular: In the 1920s and ’30s, some issues sold up to a million copies. They also shared one other characteristic: attention-grabbing cover art.

The covers on display provide classic examples of the strangely distinctive art form. “Sex and violence were the mainstays of cover art for almost every genre from Westerns, to science fiction, fantasy, and true crime,” says Luca. The pulps were also very much products of their eras, and often relied on stereotypes surrounding both gender and race: hypermasculine American men, damsels in distress, femme fatales, and people of Asian, African, or Middle Eastern descent depicted as “savage or “primitive,” Luca explains.

Given the subject matter and negative reputation, it was common for both illustrators and authors to operate under pseudonyms. A number of well-known writers contributed to them, including Dashiell Hammett (who initially wrote for Black Mask under the pseudonym “Peter Collinson”), Ray Bradbury, and H.P. Lovecraft, whose short story “The Call of Cthulhu” was first published in Weird Tales.

Atlas Obscura has a selection of cover images from the exhibition, and spoke with Luca about the pulps’ heyday, the eye-catching covers, their surprising impact on literacy, and the enduring appeal of detective stories. The exhibition runs through July 9, 2017.

Who was the target audience for pulp magazines and books?

Judging by the cover art and content, the vast majority of pulps were designed to appeal primarily to a young, lower-middle-class male audience. Many urban youths, immigrants, and other lower- and middle-class males were drawn to the pulps by the vivid cover art—which often featured voluptuous women in need of rescue—and became literate reading popular “adventure,” “spicy,” and “true crime” stories. There were also some “romance” and “confessional” pulp periodicals aiming for a female readership, such as Ideal Love, True Confessions, and All-Story Love Stories, and the Harlequin romance novels had their predecessors.

Who were the illustrators who created these images, and what became of the original works?

There were a number of talented artists who painted the artwork that was put on the covers of pulp magazines, including George Gross, Rafael de Soto, Hugh Joseph Ward, Paul Stahr, and David Berger, among others. There are a number of aficionados who have collected and preserved some of the original artwork, but much has also been lost.

What caused the demise of pulp magazines?

Two major factors contributed to the decline of pulp magazines after their heyday in the 1930s, ’40s, and ’50s. One factor was the challenge posed by competition from comic books. Another was the technological advances in the printing industry that made cover images deriving from photographs cheaper than the reproduction of original painted artwork by pulp cover artists.

What carries on the pulp tradition in popular culture today?

Although the flood of pulp magazines dried up in the late 1950s, pulp paperbacks never completely went away. Harlequin Enterprises, for example, was founded in 1949 as a paperback reprinting company, and continued to serve the “romance” and “women’s fiction” market on into the present. After Quentin Tarantino’s 1994 blockbuster Pulp Fiction helped to rekindle an interest in the “crime” pulps, a number of publishing houses have been capitalizing on that revival of popularity to reprint classic pulps, as well as to publish editions of new or neo-pulp stories. The popularity of the HBO True Detective series is illustrative of the American public’s continuing fascination with this genre.

Are You There God? I'd Like to Sue You

Yes, people do file lawsuits against the Almighty. But the devil, so to speak, is in the details.
printingvisualart

Shinbun nishiki-e were the country's answer to penny dreadfuls.
art

Our Favorite Illustrations of the Mysteries, Histories, and Heroines of 2022

Bringing a visual spark to some of our most unusual stories of the year.
science