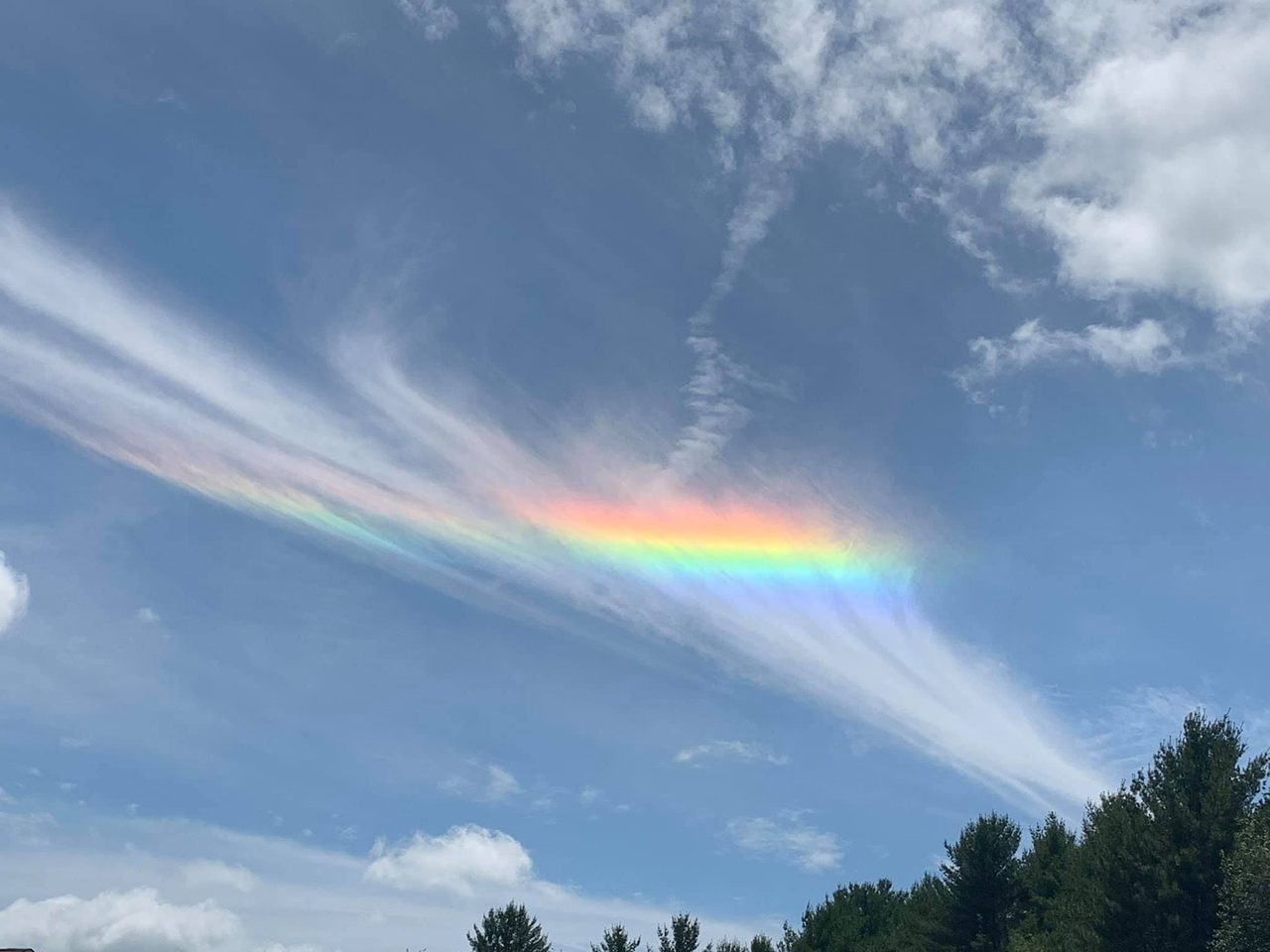 A bright "firebow" appeared over Pennsylvania in July 2021. Courtesy WTAJ via Patsy Wiscombe-Nicolaus
In This Story
Destination Guide

When a stacked spectrum of colors stretched across the sky above parts of central and western Pennsylvania in early July 2021, Joe Murgo missed it. He was in Italy with his family. Perhaps that was fitting. The sight, visible across at least four counties spanning 40 or 50 miles, looked a little like a rainbow cookie from an Italian-American pastry shop—red, yellow, green, a riff on the colors of the Italian flag. It was a familiar kind of sight, but appeared on a sunny day with wispy clouds. Many onlookers found it baffling.

When he returned home, Murgo, the chief meteorologist at local TV station WTAJ, wasn’t surprised that stories and pictures of the stack made their way to him. During the 20 years he has been at the station, he’s seen a lot of weather over Pennsylvania. This particular phenomenon isn’t especially unusual, he says, but it never seems to stop intriguing people. “The number one comment is ‘Hey, how are we getting this? There’s no rain,’” he says. “‘The sky is blue—how could there be a rainbow?’”

The answer is that it isn’t a rainbow. The stack of colors is known as a circumhorizon (or circumhorizontal) arc—or, sometimes, a “firebow.”

Though the word “arc” implies a degree of swoopiness, a firebow looks more like a flat band than a rainbow’s signature semicircle. These stunners form differently, too. You might see a rainbow when sunlight rushes past you from behind and strikes water droplets (from rain, fog, or a hose) in front of you. Firebows, on the other hand, form when the sun is fairly high in the sky—more than 58 degrees above the horizon—and sunlight refracts off of the ice crystals in high-altitude clouds. Arranged just so, the ice crystals in faraway cirrus clouds behave like “tiny little prisms,” according to NASA, scattering light and producing the not-quite-fiery show.

Firebows aren’t the only colorful potential residents of a sunny sky. So-called iridescent clouds have similar hues, but those appear more diffuse and swirly. If what you’re seeing seems tidy and organized, chances are good you’re seeing a firebow.

The likelihood of laying eyes on one varies by time of year and location. In order for sunlight to strike the ice crystals at the right angle, the sun has to be in a particular position, one that’s more likely in months when the sun climbs highest. In the northern hemisphere, that makes the phenomenon most likely in the summer. Murgo says he often spies something like them from ski lifts in the winter—actually circumzenithal arcs, a type of halo that looks like a belly-up rainbow. (And beautifully jumbled iridescent clouds can be spotted year-round.) In general, according to the Cloud Appreciation Society, people in lower latitudes stand the best chance of spotting firebows. At latitudes above 56 degrees north, the sun doesn’t rise to the occasion, meaning that sky-watchers around St. Petersburg, much of Quebec, and most of Alaska (not to mention their more-northerly neighbors) are out of luck.

Firebows sometimes stick around longer than a rainbow, Murgo says, especially when thunderstorms’ thick clouds don’t sweep past and cover them up. To determine whether you might be able to spot one, you can calculate the sun’s altitude near you and hope for the right conditions to arrive. Or you can scrap that and just treat the sky like a pastry case, passing your eyes over it in search of a colorful treat of one kind or another.

Why Hawaiʻi Is Perfect for Rainbows

According to one scientist, geography and weather make it the “Rainbow Capital of the World.”
floods

The ghostly sight tells a story of escape, survival, and a post-flood feast.
lakes

When conditions are right, the waters of Congaree National Park can look like bright scoops pooling on a sidewalk.
Video • PinDrop